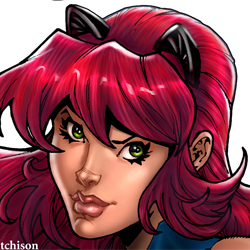 As a girl, Cassia grew up as a tomboy who learned karate, ran track and took gymnastics. One day when a little girl is kidnapped for ransom, she finds that she might have what it takes to be a superhero. Little does she know that being a hero was always in her blood … Our story opens in Greenville, Michigan as Cassia Crawford demonstrates just how much of a tomboy she is when she has trouble buying clothes for an upcoming vacation to California. As she heads home through the corn fields, a truck nearly runs her down as it speeds by. Hanging out of the window, a small girl cries for help. Cassia chases after her as she wonders if her secret abilities are capable of stopping a speeding truck. Nervously she jumps into the back of the truck and prepares to jump off the tailgate and pull it to a stop. All she’s ever done before was stop a mugger and save a cat from a tree. Is she ready for this? The little girl buckles her seat belt as the kidnapper day dreams about his ransom money when Cassia puts her abilities to the test. The truck comes to a dead stop but the driver doesn’t as he flies out the windshield landing several feet in front of the vehicle. The grateful child hugs her then the two of them walk to safety all the while not knowing that they were being watched from above by a mysterious stranger in blue and white.

Returning home, Cassia finds her old friend Brenda who she hasn’t seen in years waiting for her on the front porch. The two go inside and share a cup of tea as they catch up. The conversation starts with Brenda asking if Cass still reads up on superheroes from the news and asks if she remembers a hero named Velvet Fox. Despite her grandmother’s efforts to keep her away from it, Cassia recalled the hero just as Brenda reminds her that Velvet Fox died the same year her mother did. Finally piecing two and two together, Brenda tells Cassia all about how heroic her mother was and how she longed to protect her daughter. Cassia was in for an even bigger shock when Brenda revealed that her mother’s costume and hideout were hidden behind her grandmother’s bookcase all along and that it was her last wish that she would inherit it. After trying the costume on and joking about how she looked like a critter, Brenda tells her that she didn’t come alone. In the living room waited the superhero team known as The Core (Paradox, Rookie, Icon and Starlette); her mother’s former teammates. Starlette informs Cass that her mother wanted her to be trained to use her superpowers. Brenda interjects and states that it was her wish that her education come first. As the two caretakers bickered back and forth, Icon steps forward to invite her to join the team her mother once called her home.

FUN FOR THE WHOLE FAMILY

This story has cute written all over it with the sweet country girl protagonist and her simple lifestyle rescuing the innocent little girl in God’s country. This issue plays out like a Dear Diary moment in every way. It’s a really good origin story but I wonder if the lighthearted theme of the first issue is going to fit well with the expectations of being in her mother’s shadow. The flashback scenes of her mother saving the day seemed to be on par with any other team based superhero book and Cassia is talking as if she’s on a CW show. Perhaps she lives next to Kent Farm. I wonder if the next issue is able to pull itself out of this down home feelin’ while not seeming like they had to change the tone of the book.

It’s hard to keep in mind that this story takes place in Michigan. Between the cowboy hat, corn fields and country atmosphere, it feels like everything is taking place in the Heartlands of America or somewhere in the South. There are times where I swear I can hear a country drawl in the way they’re read. I’m sure there are farms in Michigan but I think most people will admit that that isn’t the first thing that comes to mind when you consider the region.

The art is very well drawn and reminds me a lot of Gen13. Our heroine bears a slight resemblance to Fairchild with her proportions being squeezed into a skin tight body suit. At first glace of the cover and reading the first few pages, I almost wondered if this comic would have gratuitous chest and butt shots once in costume. The girls are definitely drawn sexy but in a wholesome natural way that delivers the same effect; making guys stare. Speaking of “staring”, in the first few pages Cassia’s left eye really distracted me. One page 3, her eye looks really gimp in two panels and made me wonder what was wrong with her. It’s so noticeable that I had to stop at the end of the page to stare at it some more and try to figure out if it was supposed to look like that or not.

This issue hits shelves in August, so if you’re interested you can pick up a Previews book and preorder now. This was a good read if you’re really in need of something to pass the time. I don’t have hope that this is going to be the next major superhero story but will admit that it would probably be a read for when you want to spend time with something that’s not a universe encompassing mega event. I give this issue two out of five stars because while fun, still has a few inconsistencies and more than a few things that remove me from the story being told. Just don’t tell DC that there’s another Justice League type team being lead by a man named Icon.