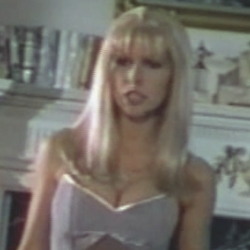 Wolverine. Cyclops. Jean Grey. Beast. Storm. Prof. X. Iconic members of one of Marvel Comics’ most widely recognized super teams, the X-Men. Every one of them born with amazing mutant abilities, banded together in an effort to save a world that hates and fears them. I’m here to tell you today…

Not a single one of them are in this film.

Instead, we get a guy with a bad Irish accent, a woman with ill-defined psychic powers, a Latin stereotype, and a group of bland supporting characters kinda-sorta against a bargain-bin Jim Carey. Take the jump, and let’s get this over with. An X-Men Tie-In Without Wolverine?! Inconceivable!

We start out the film in a medical laboratory, where wacky mad scientist Russell Tresch (Matt Frewer) is about to lobotomize a still-living mutant. He’s doing this in a effort to effectively give himself the power to enter the “Dream Dimension,” a place where everyone collectively goes when they sleep. In storms a pissed off Emma Frost (Finola Hughes), who decides the work she’s been helping Tresch with is morally wrong, and uses her telekinetic abilities to wreck the place. Wait, did I just say telekinetic? Yes, yes I did.

Five years later, a young Jubilation Lee (Heather McComb) accidentally fries a Virtua Fighter arcade machine, and winds up in jail for being a mutant terrorist. What? Anyways, using Cerebro (which looks like the Mr. Coffee machine from Spaceballs), Emma locates Jubilee, and enlists the help of Sean Cassidy (Jeremy Ratchford) in order to break her out of the slammer. Once free, they whisk her away to Xavier’s School for the Gifted, a home and training facility for mutants. Along the way, the group pick up Angelo Espinosa (Agustin Rodriguez), a mutant with the ability to stretch his skin like Mr. Fantastic, albeit with a lot of pain. Oh, did I mention that Jubes and Angelo both have latent psychic powers? I hope I did, ’cause that ‘s important for later.

So, the group get to the school, and after being checked in (including one of the weirdest, most unsettling scenes including a crying Jubilee being forced to take off her top for a “full body scan”), they go to meet the rest of the class: super-jerks Mondo and Refrax (Bumper Robinson, Randall Slavin), shy tomboy Arliee (Suzanne Davis. Interesting note: the credits list her name a “Buff,” but she is not once called that in the film) and the snooty Monet (Amarilis). Together, the group fight with each other, laugh with each other, and eventually become best friends through the shared disdain they have for the “townies,” or non-mutant folk. Also, Angelo finds a dreamwaking machine Emma built with Tresch, and immediately starts using in conjuncture with his latent psychic abilities it to convince a townie to love him.

Bad news though, as Tresch is also using a dream machine in an attempt to kill all of his former employers. If that sounds kinda like the plot to A Nightmare of Elm Street, you’re right, and it’s even referenced in the movie. Anyhoo, with about 18 minutes left in the film (a film that’s 87 minutes long no less), Tresch kidnaps Angelo, tries to eat his brain, get attacked by the students, finds out he’s already gained his dream powers from extended use of the machine, yells at Emma for a bit, and is thrown into the Dream Dimension, trapping him in his mind forever. Or something like that. The flick wraps up with a shot of one of the students modeling the new Generation X costumes for the rest of the team.

This film is an odd duck. In the mid-1990’s, Twentieth Century Fox acquired the rights to a handful of Marvel Comics’ properties and immediately started cranking out TV pilots, attempting to cash in on the Marvel brand. One of these Movie-pilots was, of course, Generation X (other failed tries were the oft-forgotten Power Pack Saturday morning show and Nick Fury: Agent of S.H.I.E.L.D. starring David Hasselhoff). Apparently, Fox also made the executive decision to only spend about $37.00 on the sets, costuming, and special effects. Because of this, many of our heroes had either superstrength or psychic abilities, i.e. powers that don’t require digital effects. Case in point – Mondo has the ability to absorb the properties of various materials, but doesn’t physically change into the material ala the Absorbing Man, meaning he can be as solid as the Thing, all without looking like the Thing; Arlee has the body of a weightlifter, but is embarrassed of her looks, and is always covered from head to toe; Monet is also crazy strong with no changes to her appearance. Jubilee’s fireworks were serviceable but underused, Angelo’s stretching was at least better than the effect used in the Corman Fantastic Four, Banshee’s scream looked pretty good, all things considered. Costuming was also unremarkable, as it looked like most of the cast raided a Goodwill or Salvation Army for their wardrobe. The one good point that came out of the set design was that the mansion used for Xavier’s School was reused for the X-Men films.

OK, so the effects and costumes were bad. Not a big deal, right? Well, it honestly wouldn’t be… if the story and dialog were any kind of good. While watching the movie, it became incredibly apparent that the writers honestly had no idea how to write believable dialog for teens. Every line was so awkward and unbelievable, it rivaled the dialog from Plan 9 From Outer Space. And then 30 minutes in, for no reason, Jubilee started cursing. I mean she was dropping F-bombs like there was no tomorrow. Now, I’m no prude, and have no problem with coarse language at all, but in this film it was so out of place and unexpected, it took me right out of the movie. And remember, folks… this was a TV film.

Speaking of dialog, the acting in Generation X was on par for the time, I guess. Not many of the teen actors had had much experience before this film, and while it shows, especially with Bumper Robinson’s Mondo, overall they did a pretty good job. Jeremy Ratchford’s Banshee, however, had probably one of the worst Irish accents I’ve ever heard. Finola Hughes was sufficiently cold and distant as Emma Frost, but let’s be honest, “cold and distant” is not that hard to do. It would be easy to pick on Heather McComb’s Jubilee for not being Asian, but from what I understand, the character was originally written to be Dazzler or Boom-Boom, characters who’s powers are nearly identical to Jubes. Knowing that, I can let it slide. What I can’t let slide is Angelo’s blatant Latin stereotypical dialog. By that, I mean the insistence for the writers to make him throw in Spanish words and phrases into the oddest of places. To me, it really reduces him to a two-dimensional character. I mean, c’mon, he isn’t El Dorado form the Super Friends, for cryin’ out loud! Aye carumba!

So now we move on to Russell Tresch, alias Matt Frewer, alias Max Headroom. Good grief, this guy chewed every bit of scenery in this movie, then went back for seconds. Goody faces, weird accents, odd gestures, and constant Gene Simmons-esque tongue licks is pretty much all I can say to describe this guy. Now, Generation X started production about 6 months after the film Batman Forever was released. Why does this matter, you ask? Because Batman Forever was the one with Jim Carey as the Riddler, and Carey performed the exact same way as Frewer did in our film. I’ll be honest, I really wanted to say that Frewer tanked his role in a big bad way, but the more I think about it, I think his antics kinda made the movie for me.

At this point, I’m not really sure what else to say. It was an OK attempt at a semi-Marvel based television series. The movie was marginally entertaining, but not overly so, and I can see how 9-year-old Sam would have enjoyed the action scenes. However, I can also see 9-year-old Sam getting bored with the rest of the film, probably distracted by Legos or the Super Nintendo. Add in the out-of-place language and overall acting defects, and this flick just doesn’t hold up. Generation X gets 2 out of 5 stars this week. It was a nice try, but just didn’t work.