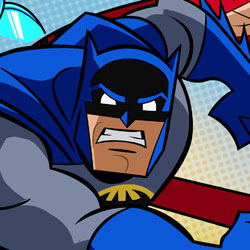 There are two things my young son really gets into; watching Batman: The Brave and the Bold, and playing on the Wii.  Before the year is out, it looks like he’ll get to combine the two as the popular animated series gets the Wii treatment.  Trailer and more information, after the jump!

Batman: The Brave and the Bold the Videogame fully immerses fans into the vivid animated world of the successful TV series where kids can play as Batman or together with family and friends in two-player co-op mode. Players can choose from iconic characters ROBIN, GREEN LANTERN, BLUE BEETLE, along with drop-in heroes such as AQUAMAN to help solve puzzles and fight foes. The game also features the majority of the great voice talent responsible for characters in the animated TV series.