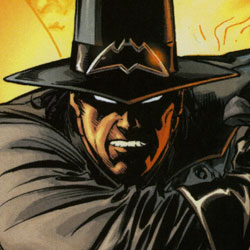 ROBOT OVERLORD: Now that my central processors have been adequately repaired, it’s time to return to a normal schedule…

MATTHEW: I’m pretty sure we’re going to have a not so regular schedule considering today is a holiday.

ROBOT OVERLORD: SILENCE! It’s time for your two favorite meat bags to dive back into an important comic book of the week, and give their thoughts on Batman: The Return of Bruce Wayne #2. Previously in Batman: The Return of Bruce Wayne: Lost in time, thanks to Darkseid’s Omega Effect, Batman spent some time in the stone age, matching wits with prehistoric geniuses like Vandal Savage, and that one guy who invented fire. Just when things started to get interesting Bruce Wayne find himself in the early days of Colonial Gotham, with a woman on his side, and a giant monster at his back.

STEPHEN: Oh boy… where to begin. I’m sure time travel takes a lot out of you. It always seemed to cause some confusion when Scott Bakula would make the jump, or when Phineas Bogg and Jeffrey Jones found themselves lost in time. Heck, even Marty McFly almost made out with his mom when he traveled back to 1955, so finding himself in Ye Olde Gotham has to mess with the head. So much so, that his rescuer – a woman named Annie, who many think is a witch – cons him into thinking he’s the regional witch hunter brought in from Boston to kill a dragon lurking in the woods. Matthew, PLEASE MAKE SOME SENSE OF THIS!

MATTHEW: I wish I could help make sense of this, but on my third run-through of the issue, I’m still kind of at a loss as to what has happened…   Bruce has been sent back through time by the Omega Effect, and is somehow moving forward in time to end up masquerading as Mordecai Wayne, witch-hunter, using his knowledge of forensics to solve murders that otherwise would have led to women being drowned as witches.  I think…  I’m not sure why there’s a woman wearing Superman and Wonder Woman symbols on her dress, or what all is going on with Cthulu attacking…

STEPHEN: Let’s not forget the Vanishing Point sequence, that finds Rip Hunter, Booster Gold, Green Lantern, and Superman at the very end of time, confronting the Archivist as the time station begins to break down. Apparently, they are there to find their friend Bruce’s timeline, but little do they know that Bruce is right before them. Somehow, he’s become the Archivist and travels back in time to try and rescue his beloved Annie. Before he’s able to escape, Superman tells him he must not travel back tot he 21st century, or risk destroying the universe.

I think it is this jump in time that doesn’t make any sense to me. Either Bruce has jumped into the Archivist, or he’s lived all this time to become the archivist isn’t quite clear, and I think Morrison ripping on Darren Aronofsky’s The Fountain, it’s a strange moment that finds Bruce completely aware of what is going on around him, to the point he has no problem hijacking the Time Sphere and finding himself in the age of Pirates.

MATTHEW: I don’t know exactly.  I read it as The Archivist being a future-past version of Bruce, further down his personal timeline than Solomon Kane Bruce Wayne…  maybe?  I’m kind of at a loss here.

STEPHEN: And to further complicate matters, DC has a new mini-series called Time Masters: Vanishing Point featuring the stranded time travelers. The series doesn’t arrive until July, and promises to be the launching point for the search for Bruce Wayne, yet it appears Morrison has already beat them to the punch. It’s almost like there is no planning going on at corporate in order to dovetail these series into one another, and it looks like the larger story is going to be D.O.A. If Time Masters and Bruce Wayne are to be clue to the next big DC arc, then DC sure has heck better get their ducks in a row, because this SNAFU is already leaving a bad taste in my mouth.

MATTHEW: Well, if Countdown to Final Crisis taught us anything, it’s that even the best intentions can lead to disaster.  I suspect that the plans on one side or the other have changed as this series and that series have evolved in directions that might be different from where they intended to go, but in either case I am not really interested in reading Vanishing Point from this issue.  But I will say this, I LOVE Frazer Irving’s art on this book.  Dark and surly and entirely fitting a confusing time-travel adventure, it really made the early portions of the book bearable for me, since the narrative and I were on different planets.

STEPHEN: I couldn’t stand the art in this issue. While others are praising Irving’s work, I wonder if he shouldn’t go back to Life Drawing 101 and learn how faces are structured. Whether it is Booster Gold’s elongated face on page 6, Bruce Wayne’s smashed in nose on page 14, that magically rebounds to normal shape a panel later, or that fact that so many of the male characters look alike, it’s maddening. Well, actually, the fact that Wayne and Brother Malleus look alike is okay as it is later revealed that they are related. And, until we learn that Mordecai is Bruce Wayne, the shadow created by his hat brim representing the Bat-mask is going to be lost on many.

MATTHEW: I look at Frazer’s art the same way I look at Bill Sienkiewicz or Mike Mignola (whom I can’t help but remind you that you love.)  It’s not representative of real life, but it’s evocative and emotional on it’s own.  There’s a slick sort of classical painting technique thing that I don’t have the vocabulary to describe in Irving’s art, and I’d love to see him on something that I can make head or tails of.

STEPHEN: There’s a lot going on in this series, and I have a feeling that unless readers are familiar with the rest of Morrison’s DC writings, they are going to be lost and lost big time. There are big holes in the plot, confusing character appearances (more of an art issue than a story telling one), and big jumps in logic that really push the limits of disbelief. I thought Morrison was back on track, following the Final Crisis debacle, but now I’m not so sure. Unless you really are dying to see what happens next, for me Batman: The Return of Bruce Wayne, receives a tepid 2.5 out of 5 Stars.

IN A NUTSHELL: DON’T BUY THE HYPE

MATTHEW:   There is, flat out, TOO MUCH going on in this series for me, and the concepts here are designed to make awesome covers and action figures rather than a coherent narrative.  (It does both of those things awesomely, however.)  Since Batman’s death in Final Crisis didn’t really follow from what went before, or connect much to what came after, this is by-the-numbers lunacy from Grant Morrison.  When I connect with his writing, Grant is one of the writers I swear by, but this has the triple negative of being an incomprehensible story that unwisely resurrects a character that I’m not all that fond off in the first place.  Batman: The Return of Bruce Wayne #2 earns a big “I don’t get it” from Matthew, and 1 out of 5 stars overall.  I wanted to love it, but it just wasn’t giving me anything to work with.

ROBOT OVERLORD: There you have it Dear Readers, two arguments that lead to the same conclusion. What say you? Was the issue better than the overall rating, or better than you thought?

Until next time, I am your Robot Overlord, commanding you to have a good day!