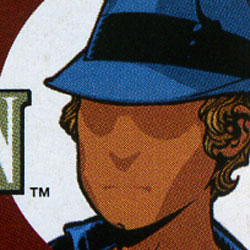 With Black Mask exposed, what is a comic book series to do? If you are Detective Comics, the answer is simple – draw the story out one more issue, with an origin story of sorts. Previously in Detective Comics: Black Mask is exposed, and with all the action centered on Arkham Asylum, it comes as little surprise that the villain happens to be Jeremiah Arkham, the head doctor of the asylum – dum – Dum – DUUUUUMMM!

This issue leads the reader down the rabbit hole as the villain unmasked has a break from his psychosis, and everyone discovers that the good doctor has been slowly poisoned for years by Doctor Hugo Strange and The Joker, and being weakened and subverted by both. In tales like these, we’re always lead to believe that the mind is an incredible piece of work, and all this time Arkham built a mental wall that prevented him from knowing about his alter ego. Likewise, readers discover that the new vault that was constructed when Arkham was rebuilt that was to house his “special” inmates, was also part of his delusion ways.

Committed to the very same asylum he lead, readers discover that the recovering doctor isn’t well at all, as Zsasz breaks into his room to murder the man that tortured him for years. Zsasz claimed he would put a cut on the inside of his eyelid after he killed Arkham to remind him of his foe, but Arkham goes one step further but overtaking the killer and doing the job himself. I like the symbolism that David Hine puts in this sequence, as it is telling the reader that Arkham really is dead, and the corrupt mind that is Black Mask is till alive and well. If readers need more convincing, the reveal that Alyce Sinner recognizes this as the two embrace in their new found situation.

It’s a convenient conclusion to a story that, quite frankly has been going on for way too long. While the character of Black Mask is an interesting one, he was much more interesting as a character up to the moment Catwoman killed him. The inspired villain, while interesting for a moment, rose to power too quickly, and caused too much confusion between multiple series to be super effective. Had it been Bruce under the cowl, I have no doubt this story would have wrapped much sooner than it did, and perhaps that is part of what Hine and DC are trying to do – show that Dick is not the skilled detective that his mentor is. There’s no doubt we’re going to see Black Mask again, the big question is how many months before he and Alyce resurface. My bet is five. Just long enough for reader to wonder what happens next, and just in time for the conclusion of The Return of Bruce Wayne.

IT DOES HAVE PICTURES

While the tale hits the beats at the right moments, it is overall slow and plodding. That’s also how I feel about the art. There’s nothing particularly striking about it. There are moments where Haun looks like he is channeling Doug Moench, and while that might excite some, it does nothing for me.

The less that is said about The Question backup story, the better.

The inmates truly run Arkham Asylum, and it took this issue for DC to put it right in front of our faces. Apparently Black Mask is such a great villain that we need to create an origin story, and drag his appearances out that much longer, only to end by showing we haven’t seen the last of the big bad. So-so storytelling and art that doesn’t do anything for me, has me giving Detective Comics #865 1.5 out of 5 Stars.