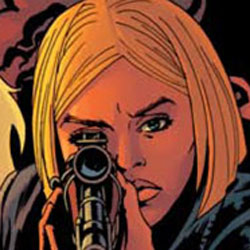 What happens when seven people are picked to live in a loft and have their lives taped for the world to see? If you’re hoping 7 Psychopaths is going to answer that for you, then you’ve got the wrong website. 7 Psychopaths isn’t your father’s MTV, but it just might be your grand-father’s World War II adventure movie. One of my favorite type of movies are the kind where a rag-tag band of misfits are forced together to overcome a greater evil. The Magnificent Seven did it, as did The Dirty Dozen. To a lesser extent, the combined cast of The Great Escape gave it to the Nazis, while The Inglorious Basterds hunted Nazis for fun. But when it comes to killing Hitler, it’s always been the lone nut, or a time travel farce with a great What-If hook. In the case of 7 Psychopaths, Fabian Vehlmann takes that What-If to the next logical iteration is to build a team of seven people, not quite right in the head, and send them on a suicide mission in the name of Queen and country.

Instead of building the troop up from the ranks of the military, the military man in charge, Colonel Thompson, who has had his own time away, gets the idea from a letter sent to him by a professor locked up in a local hospital. The issue builds as the team ends up with the master strategist, a inside man who hears the thoughts of Hitler in his head, the single mother sharp-shooter who can take the mark off a sign at 600 meters, the military man who has nothing to live for, but wants to go out with honor, and a master of disguise.

The building of the first four members of the team moves at a rapid pace, but not so much that we don’t understand how each will be valuable in the mission. Still I half expected all seven members of the team to be assembled by the end of the issue, which is somewhat disappointing. Boom! Studios seems to have the strategy to keep the mini-series short, usually at four issue, but in this case, 7 Psychopaths is tagged as having three parts. The first act isn’t even finished here, so I’m concerned the final act will be wiped up and wiped away before readers can register what is going on.

Fabien Vehlmann doesn’t waste a single page in this issue as his compresses the action so much that it does feel like you are reading two issue. Even with the large amount of setup that occurs in the issue, each bit of dialogue is well executed to be as to the point as possible without dragging on.

While the city itself is often depicted in rubble in this issue, all of the fine detail brought to the page by Sean Phillips works wonderfully. If you are a fan of his other work, most recently with Ed Brubaker in Criminal, then you’re going to love seeing what he brings to the page in 7 Psychopaths. While Vehlmann is concerned with getting the point across in as few words as possible, Phillips seems to revel in how tightly he can lay out a page to get the most information as possible in 22-pages.

After reading the issue, you’ll probably go one of two ways, either really exhausted from taking in so much content, or exhilarated over the amount of content you are presented with. With years of World War II adventure films, and espionage thrillers under my belt, it’s refreshing to see the genre brought back in the comics. The first issue of 7 Psychopaths is something I really enjoyed, and think you will, too. 4 out of 5 Stars.