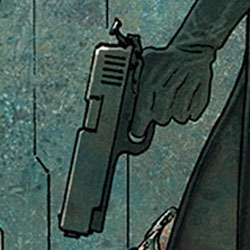 As cool as Denny Colt is, his biggest problem is he loves the ladies. Now, there’s nothing wrong with being taken in by a member of the opposite sex, but for The Spirit, the dames he falls for are usually the dames who want to do him in. Previously in The Spirit: Word on the street is someone wants The Spirit dead. That someone is of course The Octopus, crime lord of all of Central City (not THAT Central City). Unfortunately, everyone Octopus has sent after Cot winds up in jail or worse – often times much worse. If the Big Boss hopes to take down the Main Man, there’s only one way to do it; bring someone in from outside… Angel Smerti.

Will Eisner did an excellent job of creating femme fatales; sultry women who looked great on the page, but had secrets to hide. Those secrets usually involved trying to take over the world, make millions, or simply to kill The Spirit. Mark Schultz continues that tradition with Angel Smerti, a contract killer from Europe. The reader knew all of this last issue, but The Spirit remains in the dark for most of this issue.

Here Schultz spins a tale that finds an attractive madame in the office of Commissioner Dolan spinning a sob story about The Octopus killing some of her girls and is seeking help from The Spirit. Sensing a set-up, The Spirit agrees to meet her for dinner in a restaurant in a not so nice part of town. It still a wonder to me that Denny can walk around with his domino mask on all day and no one pays him any mind. I guess it is one of those weird things readers are just going to have to go with in order to enjoy the story, but it will be something that constantly nags me.

Before the check arrives, thugs come at The Spirit and his mysterious madame, guns a blazing, prompting The Spirit and his lady friend to beat feet via the nearest exit. It’s only then that Angel Smerti reveals herself to be the madame in disguise, and that is where things get interesting as Colt gets his hash served up to him in a page turning sequence that makes one wonder if this really is the end of The Spirit (hint: It’s not).

There’s a nice wrap up sequence leading to the real cliffhanger of the issue, that finds Colt in the apartment of Ellen Dolan (the Commissioner’s daughter), suddenly realizing he’s put her in jeopardy as Angel Smerti comes bursting through the window.

Schultz continues to tell a tight story through the words and tight paced action sequences. I like that The Spirit isn’t treated as some high and mighty hero that is without vice or faults, as the issue is filled with innuendo, violence, and a guy who isn’t afraid to hit a woman – hard. The Spirit certainly comes across as the Working Man’s hero, and I think that is what makes him appealing in the long run.

As much as I praised the art and coloring last issue, there’s something in this installment that just seems off for some reason. It’s hard to nail down the specifics, but I think it has to do with the lighter colors that are used that detract from the dark and heavy feeling from the previous issue. Once again Moritat delivers some fine art, but there are places it seems rushed, as though the issue needed to get to press sooner than expected. The color takes on a more of a water color look this issue, which I didn’t pick up on last time, but it still works, and Bautista continues to deliver coloring that matching the in panel lighting layout. And that means a lot to me as it shows he really understands lighting and shading and that not everything has to be a simple solid colored background.

There’s a very good backup story written by Harlan Ellison that shows, once again, that The Spirit may solve the crime, but usually does it with a couple of cracks to the head first. There’s a nice revenge twist at the end that ties everything together nicely that I thought was apropos for the character, too.

The art is much better this time than last, as Kyle Baker steps up to the plate and takes a crack at this legendary character. Everything about Baker’s work hits the mark with me expect for the shading. Too much computer generated shading with many elements looking like they are right out of the default setting, slapped on top of some really stunning black and white images. It could have been so much more…

If you were on board for the first issue, then issue 2 takes it up another notch with plenty of action, well written dialogue, and art that doesn’t completely disappoint. Concerns about art aside, The Spirit #2 is well worth the time you’ll put in to read the issue a couple of times for the fun of it. I think the issue is solid enough to earn 4 out of 5 Stars.