Archie Comics sent Major Spoilers a sneak peek of Archie #608 and Betty & Veronica Double Digest #181.  Both comics arrive in stores next week (May 26, 2010), but you can take the jump for an early look.

ARCHIE #609
“More Than Words”: Last issue, readers witnessed the double-bill of the century, as The Archies and Josie & the Pussycats co-headlined a major concert tour!  When the lights dimmed, it turned out that the lyrics to the love songs weren’t just being recited on stage… but also whispered into Valerie’s ears by Archie!  The two lovebirds soon became songbirds, penning their own original love song.  But when Betty and Veronica find out, they’re in no mood for love songs!  Can Archie and Valerie have a relationship amidst the suspicions and jealousies of their band mates, or will the curtain fall on their rockin’ romance?
SCRIPT: Dan Parent
ART: Bill Galvan
Shipping Date: May 19th, 2010
On Sale at Comic Shops: May 26th, 2010
Newsstands: June 8th, 2010
32-page, 40 lb glossy stock, full color comic
$2.99 US 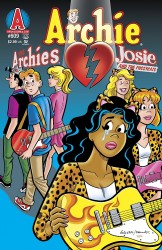 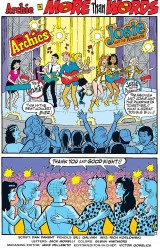 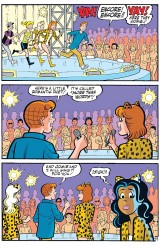 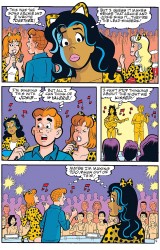 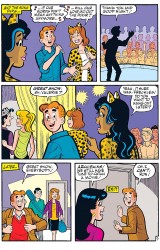 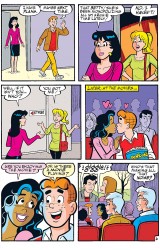 BETTY & VERONICA DOUBLE DIGEST #181
“No Baseball for Betty Part 2”: Continued from last issue.  If you think Archie has a hard time choosing between Betty and Veronica, wait until he has to choose between his feelings for Betty and his desire to play shortstop on the baseball team – the same position Betty is trying out for!  Yes, last issue Betty decided to play hard ball instead of softball, and in the process she threw a curve ball to Archie and the other boys on the team!  In fact, it’s led to an all-out debate between the boys and girls, and now the boys are threatening to petition that Betty be banned from baseball!  Who will prevail?  There are still several innings left to play in this multi-part tale!
SCRIPT: Mike Pellowski
ART: Rod Whigham
PLUS: Other new and classic tales!
SCRIPT AND ART: Various talents
BONUS: Puzzles, games and pin-ups!
Shipping Date: May 19th, 2010
On Sale at Comic Shops: May 26th, 2010
Newsstands: June 8th, 2010
160-page, full color digest
$3.99 US 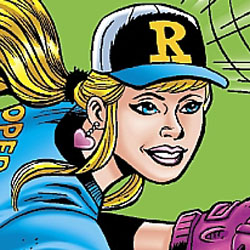 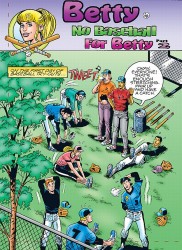 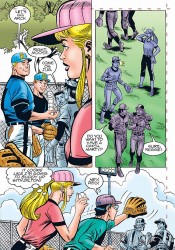 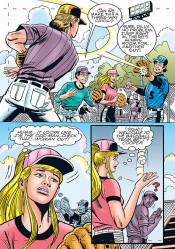 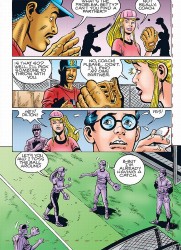 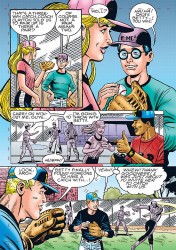