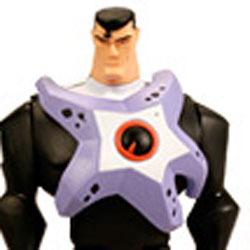 Batman Beyond and Mister Terrific join the animated JLU

If you are like me, and continue to collect the Justice League Unlimited figures, then you’ll be happy to learn that Batman Beyond and Mister Terrific are joining the lineup later this year at fine Target stores everywhere (expect Topeka, Lawrence and Salina, Kansas).

* Future JLU Superman with Starro Spore — In a double dose of firsts, this release will mark the initial availability of an all-new figure, plus it includes fan-favorite Starro Spore as a never-before-offered accessory!
* Barry Allan as The Flash with Lightning Bolt — It’s the first time this figure is offered, so you’ll want to catch him before he’s gone in a… well, you know…
* Power Ring — Evil twins everywhere will rejoice when Power Ring joins their ranks for the first time as an action figure. Features a giant green hand construct.
* Batman Beyond with Batarang — Available for the first time as a single, Batman is ready to battle the bad guys when stocked with this staple from his arsenal.
* Mr. Terrific — Also making his big debut as a single, the ever-present T-spheres have been completely redesigned.

No word on release date just yet, but you can bet I’ll be buying these from Mattel directly when they are available.