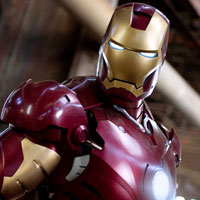 This week, I’m going to start things off by “pulling back the curtain,” if only just for a moment. The whole idea behind the From the Vault series is to highlight older, oft-forgotten cinema gems that have, in one way or another, a connection to the realm of comic books. Honestly, this piece is supposed to be mainly about older flicks. But one can’t live on “Golden Oldies” alone, so this weekend I ventured out into the world and caught a showing of Jon Favreau and Robert Downey Jr.’s Iron Man II. Is it another instant classic, or does it suffer from Sequel-itus? Let’s find out!

Fair warning… I may delve into some plots and ideas that could potentially spoil the movie for you. If you haven’t seen Iron Man II yet, and want to go into it fresh, untainted by my opinions of the film, DO NOT read my review. Save the link, go see the movie, then come back and read the review. I promise it will be here when you get back.

How to Lose Friends and Alienate People, Tony Stark-Style

The film opens immediately after the end of Iron Man I (or, more accurately, concurrently with the last 2 minutes of IM1), where Russian scientist/criminal Ivan Vanko (Mickey Rourke) watches both the press conference held by Tony Stark (Robert Downey Jr.) and his father slowly dying. As Stark announces to the world the he is Iron Man (wait… didn’t Ozzy Osbourne claim that he was Iron Man 40 years ago?), the elder Vanko reveals that he was the one who created the arc reactor that is now implanted in Stark’s chest, then promptly dies. Do I smell a revenge plot a-brewing?

Six months later, it is revealed that the U.S. Government, led by slimeball Garry Shandling, has been trying to get their hands on Tony’s armor, as well as contract other R&D companies in an attempt to build their own, with very little success. One of these failed attempts came from Hammer Industries, owned and operated by Justin Hammer (Sam Rockwell). Long story short, Tony bests the government, humiliates Hammer, Garry Shandling curses, and everyone goes their merry way. Things couldn’t be going better for the great Tony Stark, right?

Wrong. Tony is slowly dying from palladium poisoning from the arc reactor. Because he hasn’t been able to find a cure, or at the very least a substitute for palladium, Tony has become more reckless, and also has slowly and secretly giving away his possessions, including his company to his assistant Pepper Potts (Gwyneth Paltrow). He also hires a new assistant, Natalie Rushman (Scarlett Johansson), because… well, wouldn’t you?

Next is the Whiplash fight that I’m sure everyone’s seen from the trailer, so I’m going to skip it. In fact, to speed things up, I’m just going to hit on the major points from here on out. Justin Hammer breaks Vanko out of jail and gives him unlimited resources to build a new suit of armor. Vanko then promptly decides that armor is no good, and builds a bunch of mindless robot drones. Tony throws a huge shindig at his place, and ends up getting in a drunken armor battle with James “Rhodey” Rhodes (Don Cheadle). Rhodey takes off with the Mark II (silver) armor, and the government has Hammer install a metric ton of weapons in it. Stark is put under house arrest by Nick Fury (Samuel L. Jackson), and discovers an old town model Stark’s father built is actually a diagram for a new type of metal (this is the spot where my Big Gulp kicked in. I was told I didn’t miss anything). The metal is used in a new arc reactor (which won’t kill Tony anymore), Vanko assumes control of the Hammer drones and the War Machine armor, we get 10 solid minutes of explosions, Scarlett Johansson in skintight leather (Yowza!), and Iron Man saves the day and professes his love for Pepper. Not bad for 124 minutes.

Too Many Chefs in the Kitchen?

If I were allowed only two word to describe Iron Man II, those words would be “talky” and “manic.” Let me explain. There is a ton of dialog in this film, and while I appreciate a good dialog-driven film, and understand that good movies can’t be all action, all the time, I was taken aback by the sheer quantity of dialog-heavy scenes. Now, many of these scenes are top-notch, especially when Downey and Rockwell are able to play off each other, but y’know… sometimes I just want an action-packed thrill ride. I will also say that the three big fights scenes (I’m counting the last 10 minutes as one long fight) were excellent, even though the Grand Prix fight was a little short.

Speaking of the “talky,” everyone did a phenomenal job, acting-wise. Downey was cocky, reckless, but intellegent nonetheless, Paltrow did a great job playing someone slowly unraveling from stress, and Cheadle stepped into the role of War Machine effortlessly. I got a little tired of Rourke speaking a line in Russian, then repeating himself in English (a little of that would have went a long way), and while I really like Sam Rockwell and his portrayal of, essentially, a funhouse mirror version of Tony Stark, I was really sick of him by the end of the movie. That may have been the goal, though. Sam Jackson was… well, Sam Jackson, but that’s why you hire him. And I agree with the the decision to give Black Widow an American accent. Scarlett Johansson is a good actor, great to look at, but I would imagine her Russian accent would be akin to Natasha from Rocky & Bullwinkle.

I also thought that that there was just too much going on in the film. I mean, Tony has to fight the U.S. Government, fight alcoholism, fight palladium poisoning, fight Justin Hammer, fight Whiplash, and fight his friends. Throw on a secondary plot to set up the upcoming Avengers flick, and you have a movie that has too much going on to successfully cover any one of those plot points in full. I mean, the ending, while awesome, was merely a clusterschmoze to wrap up the various loose ends. It just felt like it was too much.

A Downey-Less Avengers?! My Conspiracy Senses Are Tingling!

For this next bit, I should probably let you all know that I am, among other things, a HUGE conspiracy theorist. If someone told me that Bigfoot and the Loch Ness Monster go golfing at Area 51 every August, I’d give it more than just a passing thought. Sometimes, these urges in discovering the “real” truth about things bleed through to my movie viewing experiences.

And the end of Iron Man II made my conspiracy alarm go off.

Here goes: I think the end of the film made it so Downey would NOT be in the Avengers film. Go with me on this… a film with a plethora of enormous stars would be very costly. I think, in order to save money, we won’t get Tony in the armor, we’ll only see the Hulk (alleviating any reason for Ed Norton to be there), Chris Helmsworth is a (relatively) no-name actor, so he won’t be paid as much, and I doubt Chris Evans demands a big paycheck despite being a recognizable face.

Now, I’ve been told that, chronologically, IM2 comes BEFORE The Incredible Hulk, and that last scene merely describes why Tony Stark was seen in the last bit of that movie. And this may be true. Just consider my “alternative motive” food for thought.

All in all, Iron Man II was a good film. It had action, it had a decent story, but ultimately… it is no Iron Man 1. Now comes time for the grading. I had a real hard time (that’s what she said) deciding on the number of stars to give this flick. It’s times like this that make me wish Major Spoilers gave out quarter-stars. I very easily could have rounded up my score and given it 4 stars, and perhaps after multiple viewings I’ll change my mind, but this week I’m going to err on the conservative side and give Iron Man II 3 ½ out of 5 stars.

And as always, your mileage may vary.