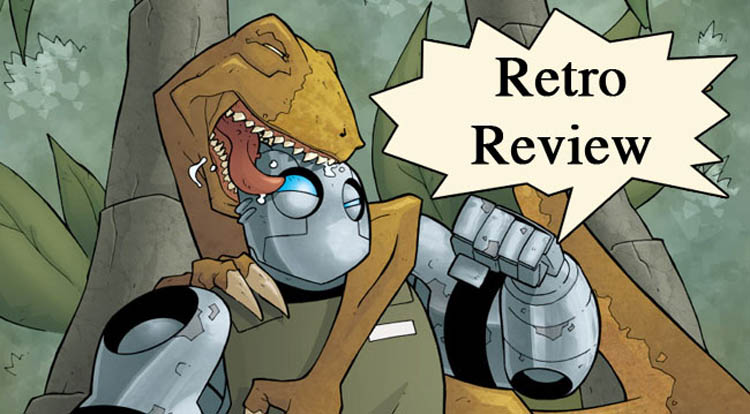 Yes, Free Comic Book Day was weeks ago, but dang it, Iâ€™ve been busy with stuff (super secret stuff), and I only just made it to my FCBD stash in my ever growing comic book stack, which is relatively small when compared to my ever growing comic book collection that has not been bagged, tagged, and boarded.Â  Itâ€™s all on my to do list, just like this Mini Retro Review of Red 5 Comicsâ€™ Free Comic Book Day Atomic Robo issue. Why does Atomic Robo hate Doctor Dinosaur?Â  The answer lies in the battle between the two as Doctor Dinosaur claims heâ€™s traveled back through time to prevent the mammals from destroying his reality.Â  No matter how many times Robo attempts to discredit Doctor Dinosaurâ€™s claims, the Raptor looking dino insists heâ€™s done it with the help of crystals.

What I like best about Brian Clevingerâ€™s writing in this issue, is he doesnâ€™t waste anytime in dropping the reader in the middle of the action, while at the same time giving you all the information you need.Â  During our recent MSP interview, I commented on how much research Clevinger does for his stories, and it looks like he did a lot of it for this story that is essentially a promo piece.Â  All of Roboâ€™s retorts on time travel are based on scientific arguments, or maybe theyâ€™re are not, but it comes off as believable here.

I also like how Doctor Dinosaur comes off as a complete nut, changing his world view, each time Robo makes a proclamation.Â  It works to further the character development for a character we donâ€™t even know if we will ever see again.

On the art side, Scott Wegener delivers fine art, served up in the storyboard landscape view that he has been experimenting with for the last year or so.Â  IT works very nicely here as it compliments the island setting the fight takes place on.

Credit really needs to go to the two, who have crafted a unique original story that they gave away for free.Â  Many comic book publishers use Free Comic Book Day as a way of repackaging old stories or issues to draw readers in, but Clevinger and Wegener took the time to whip up something totally new.

I know weâ€™ve been reviewing a lot of independent titles on Major Spoilers recently, and there is a reason for that; there are so many really good titles and stories that go unnoticed because other review sites are so focused on the big two, that in this economy many of these great series will disappear if the word doesnâ€™t get out.Â  I think it is pretty clear that everyone at Major Spoilers digs Atomic Robo, and you should too.Â  If you donâ€™t believe Why Atomic Robo Hates Doctor Dinosaur doesnâ€™t deserve 5 out of 5 Stars, head over to the Red 5 Comics website, and check out the entire story yourself.

For those of you who are on the Atomic Robo bandwagon, and even the few of you who aren’t, use the comment section below to convince others why your point of view is correct!