Elementary, my dear brother!Â  The Raven did it. 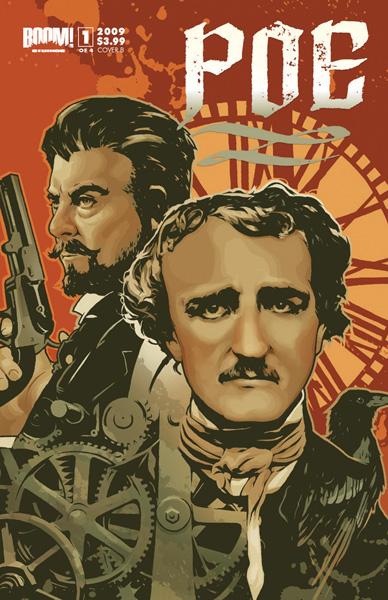 When Boom! Studios sent me an advanced copy of Poe #1, I was certain it would fall into some boring tale of a writer gone mad, so I was not too interested in reading the series.Â  However, a mere two pages in, and something amazing happened; I discovered a kickinâ€™ story that brings Sherlock Holmes to America.

Take a look at the plethora of comics that feature long dead writers as the protagonist, and Iâ€™ll show you a surplus of comics that are lacking a really good engaging story.Â  Poe #1 almost falls into that trap of attempting to spin a yarn where the author is tormented by ghosts, which leads him to write some of his best stories ever.Â  The beginning of the issue finds Poe locked up in an insane asylum as he believes he is constantly being haunted by the ghosts of the dead, including his beloved Virginia.Â  However, with the appearance of his keeper, and older brother, Henry, the issue turns into a Doyle mystery that kept me entertained.

Unlike real life, Henry is part of the local constabulary and the lead detective on a series of murders where the three victims all died in a similar manner.Â  Having been ejected from home for the disturbed, Edgar ends up tagging along with his brother to the scene of the most recent murder, and turns into his own Dupin, as he begins to apply scientific logic to the evidence before him.Â  It seems like a neat turn of events, until Poe loudly proclaims that in addition to the logic used to discover the How and Why, he also tells everyone in earshot that he had visions of what the murders were wearing.Â  I like the blend of paranormal and science in a crime story, which certainly makes it more interesting than those other fictionalized accounts of authorâ€™s lives.

The clues lead the brothers to a coin shop, where they discover all three of the victims purchased a coin from a rare set of five coins from the time of Jesusâ€™ death.Â  The remaining two victims havenâ€™t died yet, so it is a race against time, to find the survivors and the answer to the magic nature of the coins.

Barton Mitchell does an excellent job of creating a mystery that draws the reader in in a natural way, without pandering to the reader.Â  The story is quick paced, flows naturally, and Mitchell explains every single solution Poe comes up with, without pulling a rabbit from his hate.Â  Best of all, he created just the right hook that has me adding yet another title to my growing list of comics I need to read.

Likewise, the art by Dean Kotz is solid, as heâ€™s able to capture the likeness of Poe from the few images that exist of the author.Â  He also does an excellent job of bringing the feel of a hard boiled detective story to the page.Â  The noir feel is the ultimate sale on the art, as many readers may not realize their reading a story set in Baltimore, instead of Victorian Era London.

Probably the biggest complaint is after readers get adjusted to the way the story is going, similarities between From Hell will certainly spring up.Â  There may be some validity in those arguments, but that book is bordering on 20 years old, which means Poe will seem new and fresh.

The book doesnâ€™t arrive for another couple of months, but if you are still in good graces with your local comic shop owner, ask him to add Poe #1 to your list.Â  Good art, better story, and a mystery that may involve a golem earns Poe #1 4.5 out of 5 Stars.

If you need further nudging, take a gander at the Poe #1 Sneak Peek, we featured previously on Major Spoilers.