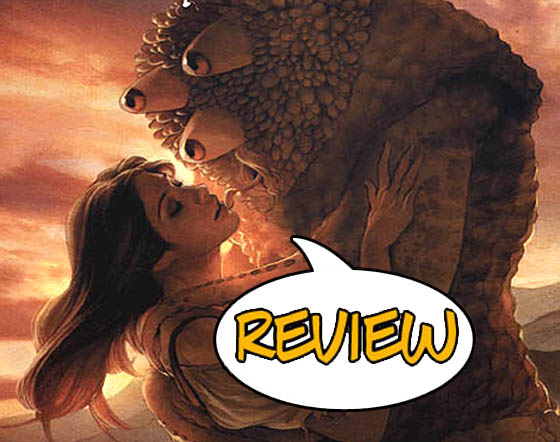 Sinatra reference…Â  Heh.Â  I feel confident in sayin’ that this is probably the only time Ol’ Blue Eyes and the Chosen One will ever share a headline.Â  I love the intarwebs.Â  But can anybody tell me why Nona Mecklenburg is making out with a giant snot monster?

Previously, on Buffy The Vampire Slayer – Season 8:Â  Dawn Summers is not a normal teenage girl.Â  Created by monks in a mystical ceremony to keepÂ an object of mystical power out of the hands of a vengeful demigoddess, she has nonetheless followed a relatively typical pattern of growing up.Â  After the death of her mother and sister (who, admittedly, got better) Dawn dealt with serious abandonment issues, then tried to follow in big sis’s footsteps.Â  Eventually leaving the nest to go to college, Dawn ended up dating and betraying “Kenny,” who turns out to be a a thricewise, which is some kinda fairy creature or somesuch.Â  Once scorned, he lays his vengeance upon Dawn by transforming her first into a giant (a phase in which she got to fight a mechanized version of herself in downtown Tokyo) then into a centaur.Â  Dawn’s third transformation, unbeknownst toÂ her friends and family, has kicked in, and things are about to get weird.Â  Which, actually, for these characters, is kind of normal, so carry on…

We open with one of the creepiest lines in recent memory.Â  “Not the knife…Â  Not again!”Â  We see a pair of hands rummaging through tools to bring out a wicked looking razor-knife.Â  “Yes,” murmurs an unseen assailant.Â  “AGAIN.”Â  He brings the blade up to the face of a tiny doll that looks EXACTLY like Dawn Summers, as her painted-on eyes widen in fear.Â  That’s just disturbing.Â  Back at the Slayer’s compound, Buffy rallies the troops to seek out little sister, but finds that they’re about to be under siege by a vampire army.Â  Xander sends out Andrew to help track down Dawn by moving in with Kenny the ex-boyfriendÂ (“Hello, I am a college student attending college…”Â  Heh.)Â  While Dawn finds herself in a collection of many other living dolls, all of whom make sure that she stays out of mischief.Â  When she tries to escape, they all drag her back to the shelf by force.Â  “You can’t leave,” croons a grinning harlequin, “you can never leave!”Â  Nightmare fodder there, for sure.

At the gates of Slayertown, the expected “army” of vampires turns out to be a handful of drunken Scottish undead, who are quickly dispatched by nearly 100 fully armed and operationals battle stations girl slayers.Â  Xander spills the beans about Dawn’s tryst to Buffy, while Dawn has a conversation with the Toymaker who wants only to protect her.Â  “Crack open that porcelain face, and… PHTT!Â  Your spirit will scatter like atoms blasting apart.”Â  He assures her that her imprisonment is all for the best.Â  While Buffy and Xander follow Dawn’s hoofprints into the woods, Willow teleports into Kenny’s apartment (thanks to Andrew’s placement of teleport totems.)Â  While Kenny slips away, Buffy finds herself alone as Xander is taken out by dozens of tiny poison arrows.Â  Buff finds her way to the Toymaker’s home, only to have Kenny teleport in and save her.Â  “I never wanted it to go this far,” he apologizes, and together they storm the house, finding the Toymaker hiding within. The sight of her ex compels Dawn to tell her slimy beau that she’s sorry, and breaks the spell, while Buffy threatens to take out the old Toyman.Â  “Don’t hurt him!”Â cry the assembled dolls in worry.Â  “He keeps us safe.”Â  Dawn and Kenny say their goodbyes, followed by a moment with big sister.Â  “You can’t keep me safe,” says Dawn.Â  “And you don’t have to.”Â  All is forgiven at Summers house, until Dawn admits to scratching Buffy’s Veronica Mars DVDs.

Heh…Â  With the exception of her horrifying swath of teenage petulance during Season Six, Dawn has always been a phenomenal character, and I really like this issue and the focus on her dilemma.Â  For over two years, we’ve been getting bits and pieces of the story, because she didn’t want Big Sister to have to sweep in and save her from the unknown.Â  This issue teases that, then gives us the swerve, allowing Dawn to save herself (and unintentionally allow Kenny to redeem himself) and letting her stand alone as a young adult.Â  The recent arc of Buffy with it’s more loosely connected storyline has been a bit up and down, but original series producer Doug Petrie has a strong handle on the character voices, and Georges Jeanty delivers his usual excellence with the art chores.Â  Buffy The Vampire Slayer: Season 8 #25 earns a strong “mid-season loose ends” episode rating of 4 out of 5 stars overall.Â  In an industry teeming with mega-events, it’s good to see a strong character piece done this effortlessly…Â