Or – “Five Characters In Search Of An Exit…” 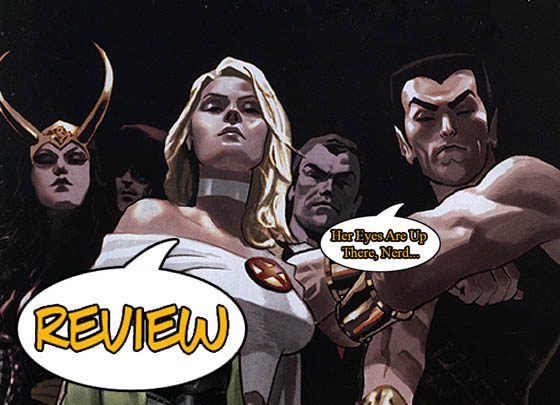 What do a goddess, a mutant, two kings, a manic-depressive psychopath and a two-bit hood wrapped in a blanket have in common?

All of them want to run things their own way, and all of them find themselves in a strange new position of power against their former oppressors.Â  As a good friend of mine is wont to say, “This is payback.Â  I’m that bitch you’ve heard so much about…”

Prevously, on Dark Reign:Â  Being at the right place at the precise moment has seldom meant so much as it does to Norman Osborn.Â  Having scored the killshot on the Queen of the Skrulls on national television, Norman (And, by the by, it’s spelled O-S-B-O-R-N, not Osborne, Osbourne, Ozborn or any of the dozen other permutations you might see flitting about the intarwebs) has been handed the keys to the kindgom.Â  Tony Stark’s old job, unlimited resources, the support of the federal government and even some spiffy armor of his own.Â  Behind the scenes, though, he has assembled some old friends to help him bleed the country dry:Â  Namor of Atlantis; Emma Frost of the X-Men; Victor Von Doom of Latveria; Loki of Asgard, and The Hood.Â  (One of these thing… is not like the others.Â  Which one, which one, is a heap of dung?)Â  The hows and whys of their alliance, and the ways that they were brought into the fold have not been explored… until now.

Â We open with the strongest piece in the book, perhaps one of the strongest segments from Marvel in recent memory.Â  The action picks up moments after the initial meeting of the Illumi-naughty, focusing on what I believe is the oldest super-villain team-up of the Marvel Age: The Sub-Mariner and Doctor Doom.Â  Doom tells Namor that when Norman goes down (and he WILL go down) that they will split the world, Namor getting the seas, and Doom the land.Â  Flash-forward one year, as the day when Normie dissolves is upon them, and he brings in his Dark Avengers to finish the Surf & Turf team.Â  Doom quickly takes down the D.A.’s with magic, revealing that he’s already disposed of the Hood, then they kill Osborn.Â  In a moment that truly underlines Doom as a villain, he also reveals that he has taken Emma and Loki and will be keeping them concubines…Â  when Namor interrupts his daydream.Â  “Sometimes, Victor, I wonder what goes on in that mind of yours,” says Namor, as Doom suddenly imagines choking Namor to death and taking the whole world.Â  “Doom,” replies the Doctor.Â  “Always Doom.”Â  Story two is more history lesson than narrative, as Emma Frost relates the series of tragedies that led her to where she is now, and explains why she would throw in withÂ a loon like Osborn.Â  “Time and time again, I’ve seen tyrants crush the powerless…Â  How did I survive the apocalyptic fire?Â  I simply refused to feel the flames.”Â  It says a lot about Emma and her role here, and about our expectations of character that she’s not really a hero, but not really a villain.Â  The White Queen is a survivor and an opportunist.Â

The Hood story is actually nicely done as well, showing him as unquestioned king of super-crime, sort of a Tony Soprano for the leotard set.Â  The story does try to make Parker intimidating, and even gives him a Godfather moment where he has to sacrifice his own needs (and a dear friend) to his new role as head capo, but due to what I see as the character’s lack of depth, it doesn’t have the bite that could bring the red blanket up to the big leagues in my eyes.Â  Namor then takes center stage in a retelling of the story of Solomon and the baby, only with a mutant Atlantean whose powers are deadly in the role of “baby.”Â  Namor, too, finds an unusual solution, taking the child from BOTH parents, and telling him he’s going to the Xavier Academy.Â  When the boy says he doesn’t want that, Namor replies, “Your wants matter not…Â  As your king, my duty is to give you what’s best…Â  WHETHER YOU LIKE IT OR NOT.”Â  Heh.Â  It’s a nice piece, but you do wonder how he’s been king for so long with such little patience for royal etiquette.Â  Our final vignette shows the first meeting between the new female incarnation of Loki and Doctor Doom, during which Doom poisons her, (“Nothing that should trouble a God from Asgard…”) lights her on fire, and observes as she callously watches his servants die in the flames.Â  “Are you convinced yet?” asks Loki, and proposes an alliance.Â  She will move Asgard from the dirtwater of Oklahoma to the regal spires of Latveria, and offers to get him the one thing that he lacks…Â  Doom considers for a moment.Â  “Latveria is not so very different from Asgard.Â  They should feel quite at home here…”

The last story ends with a teaser to check out Thor #601 to find out more on what’s going on.Â  This annoys me in a number of ways, actually..Â  First, I dislike when a book like this is so blatantly designed to get me reading another title.Â  Second, it’s not really Thor #601.Â  And Third, this Doom and the Doom from the first story don’t seem to exist in the same reality, and I preferred that Doom characterization over this, even if it was all a dream.Â  Our Joe Bob totals:Â  Good story turns out to be imaginary;Â  Okay story serves mostly as history lesson;Â  Pretty good story undermined by main character;Â  Okay story hampered by “Where does this take place and why do I suspect we’ll never see this kid again?” syndrome;Â  And finally, nice character bits used as bait to pull me into a new book.Â  We’re looking at some great art in this issue, from Adi Granov, Daniel Acuna and more, and some nice writing as well, butÂ  the overal effect is just above average.Â  I like seeing more depth with books like thisÂ  (especially since the Big Two don’t put it in a lot of the regular books anymore, going for “widescreen” over tight character focus) but this one is up and down like a roller coaster.Â  Dark Reign: The Cabal #1 earns 2.5 out of 5 stars, a nice concoction, but ultimately just boiling down to DVD extras.