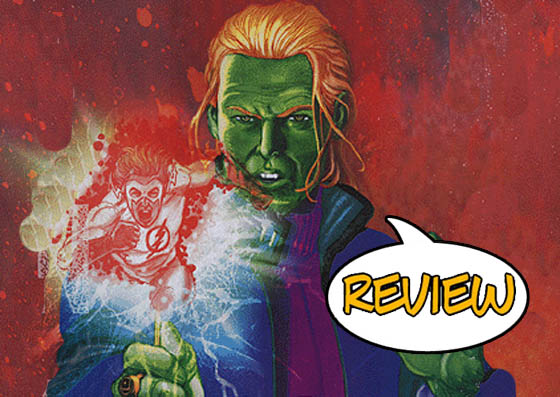 This book is late.Â  There was, I believe, a four-month gap between issues two and three, and something like 10 weeks between three and four.Â  That said, since Final Crisis tie-in miniseries are going to be continuing indefinitely (in order to make the thing actually FINAL) this isn’t that much of a problem for me.Â  Of course, the Legion’s 50th anniversary has come and gone, and we’re still not sure where the future of the future lies, but that’s okay, too.Â  (But it also means that my lateness in the Hero Histories is also camouflaged, so I got that goin’ for me. Which is nice…)

Previously, on Legion Of 3 Worlds:Â  The Clark Kent of Earth-Prime (the villain of Infinite

Crisis and the Sinestro Corps War, known to Major Spoilerites as Tom Welling-Prime) has been broken out of Takron-Galtos prison by the Time Trapper.Â  Using his full array of pre-Crisis Kryptonian powers, Prime has managed to hook up withÂ an all-starÂ Legion of Super-Villains, traveled to the future, and basically broken loose all hell.Â  The Legion of Super-Heroes has called in their reserves, including Clark Kent of New Earth (known to Major Spoilerites as Superman) and also spanned universes to gather the Reboot and Threeboot versions of their team to fight off the LSV, augmented with the likes of Universo, Mordru the Merciless, the Fatal Five, the Taurus Gang, and the League of Super-Assassins.Â  Using his power of “being the smartest man in this, or any, room” Brainiac 5 has finally tipped his hand as to what exactly was captured in his Lightning Rod a couple of years ago during the Lightning Saga, and freed none other than Bart Allen, Kid Flash, from the Speed Force.

We open in modern-day Metropolis as Danny Blaine, the JSAer known as Starman and the Legionnaire formerly known as Star Boy, goes to work at his night job digging graves.Â  Starman’s trip to the past has had an extra cost for him, as his mental problems (easily controlled with future medical treatments) have left him quite unstable.Â  “What’s my name again?” he asks.Â  “Brainy said I’d help save the future…Â  He said I’d get a gold star…Â  They’re VERY hard to come by,” he says to a headstone as he digs.Â  “Wouldn’t you agree, Mr. Kent?”Â  A quick cut back to the 31st Century, where we see Timber Wolf-3 and Element Lad-3 (for the purposes of this review, we’ll be identifying the Legionnaires by their iteration: 1 for pre-Crisis, 2 for Reboot, 3 for Threeboot) shocked at the sudden death of Sun Boy-3.Â  The Legionnaires return to the fight, while Kid Flash attacks Prime, who freaks out at the sight of the speedster that defeated him before.Â  Bart has a reunion with cousin Jenni (XS of Legion-3), while Brainiac 5-1 explains that they were able to reconstitute part of Bart out of the Speed Force.Â  Sodam Yat, Mon-El-1 and Shadow Lass-1 arrive and knock Prime off balance, while Brainiac sets off on another tangential plan.

Just as the tide seems turned, the fist of the Time Trapper snags Superman, Lightning Lad-1, Cosmic Boy-1, and Saturn Girl-1 out of the battle to his lair at the end of time.Â  With that distraction, Prime kills Kinetix of the rebooted Legion.Â  In his darkened Metropolis apartment, Sun Boy sits, watching the horrors as they occur, listing the death of Karate Kid II-1 (that’s confusing), Kinetix, and… Sun Boy-3.Â  He puts on his rign, and powers up.Â  Element Lad-3 and Mon-El-2 knock Prime down with Kryptonite, much to everyone’s surprise, but the panicked Kryptonian kills Element Lad-3, and puts the hurting on Mon-2 before the LSV regroups around him.Â  Cosmic King transforms the Kryptonite, while a team of all the Brainiacs, Light Lass-3, Gates, Wildfire-1, Dawnstar, and Polar Boy-1 make their way to the Fortress of Solitude, where their last weapon awaits.Â  Using the hair of Lex Luthor and a Kryptonian healing matrix (Uh oh…Â  this is starting to make sense) they start a repair process, just as Prime arrives and collapses the ice.Â  Polar Boy-1 engages the Kryptonian while Wildfire and Dawnstar try to figure out Brainiac’s device, but ice powers pretty much do nothing.Â  Prime prepares to kill Polar Boy-1, but is knocked out of the sky by a blast of red sun radiation.Â  “Sun Boy!”Â  Wildfire and Dawnstar come to terms with both their relationship and and the device, and just as Prime prepares to kill the fire and ice team, Wildfire gets his attention, indicating that the Legion just got another Superman…Â  “CALL ME SUPERBOY!” screams Kon-El, knocking the evil Prime out of the sky.Â  At the dawn of time, Superman rips off the purple sheet of the Time Trapper to reveals his real face…Â  the face ofÂ  Tom Welling-Prime!

Well…Â  That was… kind of stupid, actually.Â  I’m really bothered by that revelation, presuming it’s actually true and all.Â  Either way, this issue is jam-packed with all sorts of revelations, and reminds me more than anything of the first Crisis, where characters we recognized got one panel or word balloon to describe themselves before they were annihilated.Â  I’m not sure what the overall effect of this series is meant to be yet, but right now, it feels like “Teen Titans Resurrection Theatre,” and the lack of focus is hurting this book.Â  Sun Boy-1 is back, but there’s not explanation of why he felt the death of Sun Boy-3, and there’s just far too much going unexplained (Mordru absorbing Kinetix essence, how and why Kryptonite suddenly works on Prime, Dawnstar’s sudden change of heart) and a few too many characters that aren’t Legion related for my taste.Â  If this has input on Final Crisis (which I doubt) I could see it, but having Sodam and Kid Flash and Kon-El just feels as though we’re cycling through Geoff Johns’ greatest hits.Â  Which is too bad, actually, since the art is pretty awesome, and the seeming point of this series (to streamline Legion continuity) is theoretically workable.Â  Legion of 3 Worlds #4 only ranks 2 out of 5 stars from me, for general impenetrability.Â  The last chapter could bring this whole thing to a rocking close, or it could end up like the series it shares it’s name with: a big event, full of sound and fury, signifying only increase profits for DC.