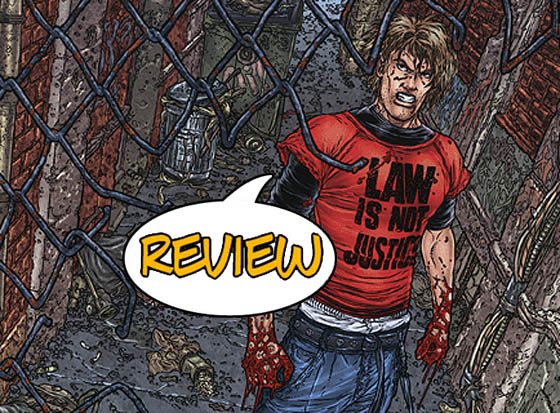 Many years ago, I managed to track down a leather-bound copy of a book entitled “The Encyclopedia of Super-Heroes.”  It listed, in ridiculous detail, as many of the superheroes created between 1938 and 1984 or so as the writer could possibly document, from Superman and Batman down to one-shot wonders like Butterfly and Hell-Rider, to advertising characters like Bud-Man.  Since then, I’ve often wondered how difficult it would be to update that volume, since the 90’s comic boom created thousands of guys whose names are synonyms for “fight,” and gave us easily as many new heroes as were in the entire original book.  But another question floated to the front of my mind while reading these issues.  If you had the opportunity, and you really wanted to be in that book, to have powers and costume and the whole schmear, REALLY wanted it…  What price wouldÂ you be willing to pay to be Superman?

Previously, on No Hero:  Warren Ellis is one of those creators that I will usually follow

anywhere, ever since I encountered his work revamping Jim Lee’s cliche-ridden X-Men knockoff, Stormwatch.  That title eventually morphed into The Authority, where Warren pioneered (if not invented) the “wide-screen comics” genre that is currently running rampant throughout the industry.  With Planetary, he almost out-Alan-Moore’d Alan Moore, with a shared reality encompassing existing characters (or pastiches of them, at the very least) drawing together the likes of Doc Savage, The Shadow, The Fantastic Four, Tarzan, and dozens of other references as well.  More than that, the sight of hordes of MODOK Elvises (Elvi?) swarming up to battle the heroes of nextwave is still a favorite comics moment of all time for me.  Ever since he went to work for Avatar Press (or they went to work for him, whichever) Mr. Ellis has created a number of odd and thought-provoking series, including Black Summer (a fave-rave of mine) and launching this book, set in a world vaguely familiar, yet completely unlike what we’ve seen before.

We start with a very Warren Ellis moment, hours after two premier superheroes have been killed, and CNN has gone into 24-hour Dead Rock Star mode. The brains behind the team, a man called Carrick Masterson (think Professor X with better hair) is forced to find new recruits for his team, and we’re introduced to a kid named Josh Carver, who knows how Masterson recruits. “They watch… And they listen.” Josh goes out that night, as he does every night, patrolling the streets for crime. When he finds a mugging in progress, he responds with lethal force for the first time, only to find himself recruited byMasterson. Josh freaks out a little, a combination of nerves and the realization that he killed his mugger, but his nervousness doesn’t keep him from giving the speech he’s been waiting to give. “I’m no hero,” he says (hey, we got us a title!), “I want to stand up and say, yeah, I’ve decided I am capable of judging you, because some things are just right, and some things are just wrong.” With that, Josh is swept away to become a member of the Front Line, America’s greatest super-team. Taken to Front Line headquarters, he is shown a glimpse of the good life, and given his dose of FX7, the drug that will make him a superman. I feel like part of this is familiar, until Josh picks at his fingernail, and it rips completely off… then ALL his nails peel free, he vomits blood, and his entire body starts to molt. Worst of all, FX7 is more than just a power pill. It’s a hallucinogen, leading Josh into his own private version of hell.

And, oh my word, what a hell it is… Artist Juan Jose Ryp creates page after page of horror, more than just blood, or guts, or gore, but tentacles, eyeballs, insectoid monsters, and scenes worthy of Heironymus Bosch. It is truly disturbing to watch, and I haven’t felt this creeped out since the “Tool” gig in Guitar Hero: World Tour. Carrick watches as Josh trips his face off (literally) but his attention is taken away when another of his heroic protegees is killed in a car bomb. Whomever has been killing the supers has intimiate knowledge of the FX7 drug, knowledge that Carrick has worked hard to keep out of the hands others, to the point of murder and international incidents. Josh awakens from his traumatic experience to find himself alive, and seemingly well, but when his skin and hair come off, it freaks him out. When his genitalia fall away, he loses his lunch yet again. Carrick sends for Redglare, the Front Line equivalent of Captain America, who tries to talke the kid out of his funk. Again, the images that Ryp puts on the page are purely awful, and yet… compelling. His face and flesh peeling away, Josh rages out of control, RIPPING his hospital bed out of it’s concrete moorings and smashing the containment room with half a ton of medical steel. “Hey, Josh!” cries Redglare. “It worked. You’ve got powers, kid!” Carrick Masterson, meanwhile, has problems of his own, as he suspects that the Russians AND the Chinese are working together to murder the Front Line. Making do with what he has, Carrick outfits Josh with a full-body containment suit and mask, dubs him Revere, and brings him out with a full press conference. And, of course, and assassin in the crowd shoots Joshua right in the face, exposing his monstrous skeletal visage to the world. As he’s hustled away for medical care, Josh yammers “There’s nothing wrong with me… Nothing wrong with me. I’m a superhuman now.”

Two words: Cree. Pee. Warren Ellis draws out the horror of the situation, focusing on Josh’s monstrous transformation, and Ryp manages to draw every ounce of “GYAAH!” into each panel, with Revere’s face looking remarkably like Darkseid fell into a pool of alien feces, and then his face melted. It’s truly hard to look at, and that’s the point. Josh’s willingness to give up everything to be a superhuman is tested and tested hard with these issues, and I’m fascinated by the story, in the same way I’m fascinated by a large bug, or an animal that may or may not be dead by the roadside. There are elements here which echo other books, such as ‘The Boys’ (written by Garth Ennis, whom I often confused with Ellis) and Warren’s own Transmetropolitan, but it’s really the art of Juan Jose Ryp, and the super-vivid coloring that makes this book leap off the stands and grab you. The first issue set us off on what seemed like a familiar journey, but the second detoured into Scavullo hell, and each successive chapter has gone further and further off-kilter, in wonderful ways. I had actually hoped to cover No Hero #5, which shipped this week, but distribution issues sent me back to the previous comics, and I’m glad I reread them. They’re good… They ain’t Spider-Man, and they sure as heck ain’t Teen Titans or Youngblood, but they’re interesting nonetheless. The first four chapters of No Hero earn a whole-hearted 4 out of 5 stars, for giving us a story and characters that are more than the sum of their parts. Just don’t read it while eating…