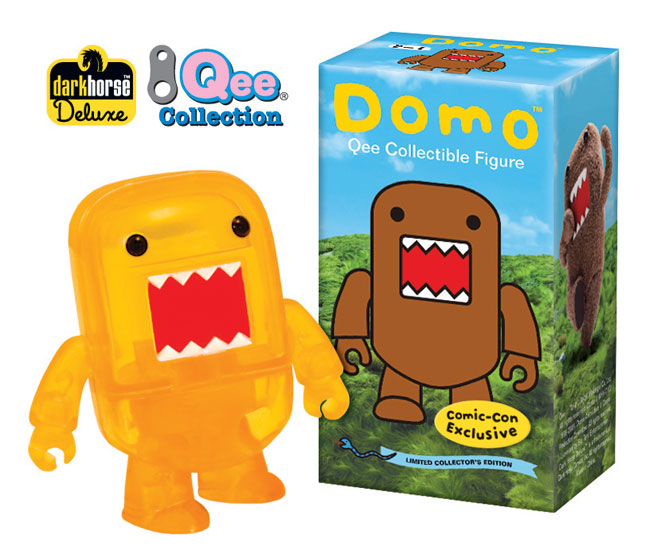 This year at the San Diego Comic-Con, Dark Horse Comics is giving attendees a chance to snatch up an exclusive Domo “Qee” transparent variant.Â  The only place to get your hands on the NHK television mascot is to attend the convention (or just wait until it appears on eBay the week after).

The Domo Qee program, to be launched nationwide in August, is Dark Horseâ€™s first try at the popular â€œblind boxâ€ or â€œmystery boxâ€ format. Individual figures are packed in small boxes; the only way to know which particular figure is inside a particular box is to purchase and open the box. In the Domo blind box assortment, figures are sold in counter displays of 15, and each display box of 15 figures is further packed into a master carton of four cases.

â€œWe presented a Comic-Con exclusive 5.5â€ Domo vinyl figure last year,â€ recalls Dark Horse VP of Product Development, David Scroggy, â€œand were blown away as all of the limited-edition sold out. This year, with an entirely new toy, we expect an even faster depletion of our Comic-Con stock. Since last yearâ€™s was a yellow variant, we chose the same color for the Qee toy.â€

The San Diego Comic Con runs July 23-26, and all Four Day passes to the show have sold out (serves you right for waiting).