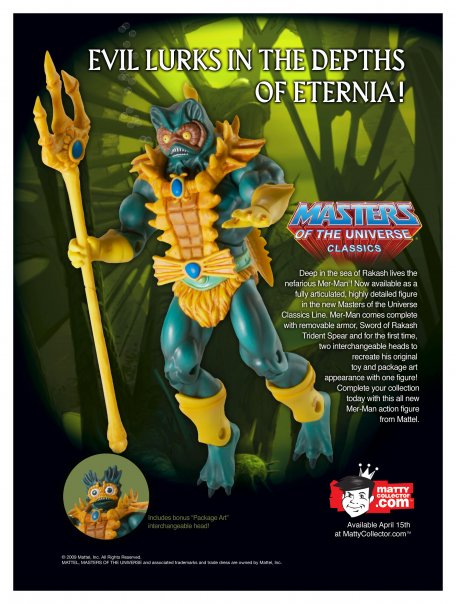 The Masters of the Universe re-mastered collection of figures from Mattel have been selling really well since being introduced by the toy company.Â  Several of those figures have been limited edition figures sold exclusively through Mattel’s MattyCollector.com website (that is until eBay sellers get on the bandwagon).

April 15th saw the release of Mer-Man, and even though Mattel has sold numerous figures through the website, the online shopping cart ended up being fraught with trouble causing many carts to remain empty, and before long international buyers couldn’t get their hands on the MOTU fish man.

The good news is Mattel is addressing the issue, and the better news is there is another chance to get the figures sometime at the end of April.

The official statement from the company after the jump.

Well looks like Mer-Man swam away way faster than we expected!

I wanted to let fans know we are WELL aware of some major technical problems yesterday with Mer-Man’s sale. A lot of this was caused by the sheer amount of overwhelming fan support for the line with so many fans logging on to buy one at once.

We have immediately taken corrective measure so that this never happens again and I personally apologize to any fan that had trouble ordering the Ocean Warlord. It was unfair for you not to be able to get a figure do to a huge spike in hits on the site. We have a new Castle Grayskull sized super server dedicated to the site and are now better prepared for larger traffic on sale days.

We have also corrected the problem with international orders and they should not have trouble ordering when Mer-Man goes back on sale in a week or two.

Honestly, we had the same number of units yesterday for sale as we did for Beastman, and it took 41 days for Beastman to sell out. It is always a careful game we play to produce just enough for fan demand without overproducing which would kill the line. (To paraphrase fans from a few years ago…)

As announced we do have more Mer-Man figures coming before the end of April. By the time we increased production, we had to send Mer-Man in two separate shipments. It is the same run; they all just didn’t make the same boat.

Going forward, we have increased production on Zodac and Hordak as well, but the full production of both of these figures should be available on the same day. If the second shipment of Mer-Man also sells out as quickly we will look at increasing overall production yet again until we get the number just right so the figure is online for at least a week or so! We do WANT to get these to fans after all.

As for concerns about quantities, we have looked at the numbers and honestly there are so very few fans ordering anything more than 3 units. By far, 1, 2 and 3 per person are the OVERWHELMING most common orders. We will keep up to ten available for international fans who want to save on shipping.

I will update everyone ASAP once we confirm the second on sale date for Mer-Man. We will continue to work with all of our fans to improve shipping, customer service options and buying options to make this as smooth a process as possible. You have my Mattel word!

Thanks for hanging in there!