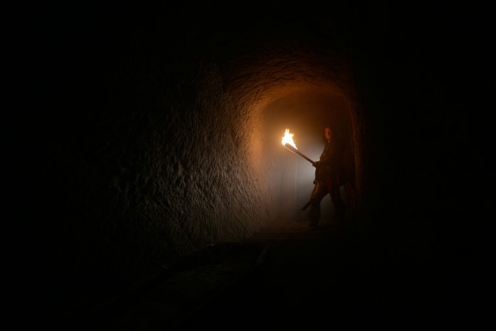 According to director/screenwriter Michale J. Bassett, the theatrical release of the adaptation of Robert E. Howard’s Solomon Kane is complete and ready to be seen by the world.

I sat down and watched a beautiful glossy print with awesome surround sound at Pinewood studios on Friday.Â  Itâ€™s done.

What I think hardly matters any more but I gotta tell you, itâ€™s a darn good movie and even after all this time, Iâ€™m not sick of it.Â Â Thereâ€™s great visuals,Â powerful performances, deep thematicÂ ideas and subtext as well asÂ some kick-ass sword fights and creature action.Â  Â Â  Itâ€™s not gimmicky or contemporary, just a very classically made andÂ beautiful to look at dark-fantasy-action-adventure. Â Kinda worked out just like I planned when I pitched it to the producers a few years ago. Some things got lost along the way but what I gained seems to have more than made up for it all. Canâ€™t wait to share it with you.

The film stars James Purefoy as Solomon Kane, and Max von Sydow as Josiah Kane.Â  According to the IMDB, the movie was supposed to be released in Greece in March, but other c0untry releases have the film opening in October of this year.

A 17th century Puritan, Solomon Kane is a somber-looking man who wanders the world with no apparent goal other than to vanquish evil in all its forms. His adventures, published mostly in the pulp magazine Weird Tales, often take him from Europe to the jungles of Africa and back