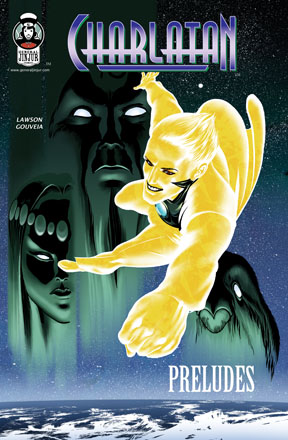 Gil Lawson is releasing his first superhero graphic novel next week, and to drum up interest, he has sent Major Spoilers a sneak peek of Charlatan: Preludes, that you can see after the jump.

Charlatan: Preludes is the first graphic novel in the Charlatan series from General Jinjur.Â  My wife Jen and I formed our company, General Jinjur, in the belief that there is a real need in today’s marketplace for smart, engaging “superhero” comics that would appeal to adult comic readers while also being appropriate for young adult readers.

Charlatan: Preludes was a “Spotlight book” in this February’s Diamond Previews (FEB094296) and will be delivered to comic shops across the U.S.in April.Â  Our artist, Eliseu “Zeu” Gouveia has been published in books such as Moonstone’s The Phantom and Image’s graphic novel Cloudburst.