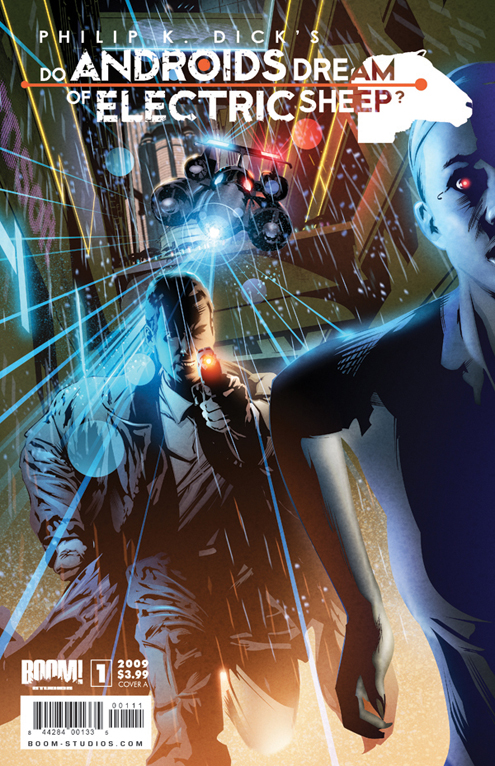 Or rather, the company has announced it will release a 24-issue maxi-series that translates Philip K. Dick’s Do Androids Dream of Electric Sheep?Â  The series will bring the complete novel to comic book form andÂ  plans to present the story with panel-to-panel continuity and actual text from the novel.

â€œWe are thrilled that DO ANDROIDS DREAM OF ELECTRIC SHEEP? is being adapted for this audience by such a talented team. Weâ€™ve been incredibly impressed with BOOM!â€™s ability to create such a faithful interpretation of the original work without sacrificing their own original instincts and artistic sensibilities,â€ said Laura Leslie and Isa Dick Hackett of Electric Shepherd Productions. â€œThrough this medium, readers will now have visual access to parts of the novel not explored in the film adaptation BLADE RUNNER.â€

Warren Ellis will provide back matter info in the first issue.

If you are a Luddite that hasn’t picked up this book or seen the movie adaptation, here’s how Boom! describes the series:

DO ANDROIDS DREAM OF ELECTRIC SHEEP? takes place in a world where San Francisco lies under a cloud of radioactive dust. The World War has killed millions, driving entire species to extinction and sending mankind off-planet. Those who remained coveted any living creature, and for people who couldnâ€™t afford one, companies built incredibly realistic fakes: horses, birds, cats, sheepâ€¦ even humans. Rick Deckard is an officially sanctioned bounty hunter tasked to find six rogue androids â€” theyâ€™re machines, that not only look, sound, and think like humans, but are clever, and most of all, dangerous just like humans.

Damn you, Boom! Studios, you have once again snagged more of my money.Â  Can’t wait until June!