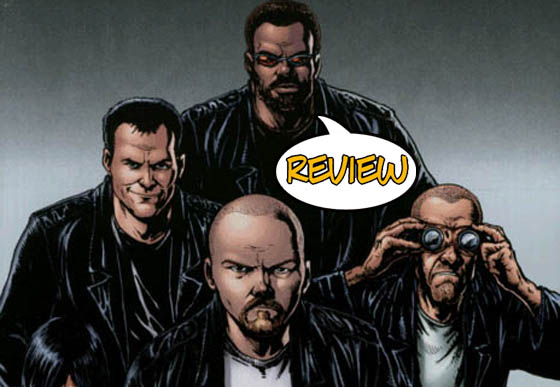 For several weeks now, Wee Hughie has been undercover inside G-Wiz, the junior team of John Godolkin’s G-Men, a team of (oddly familiar) social outcasts with wild powers and a need for some Melodramamine.Â  He has found that his teammates are almost decent people, despite Butcher’s protestations not to get involved.Â  Hughie’s cover was blown last issue, and now the last living member of G-Whiz is about to spill Godolkin’s secrets… OR ELSE.

Previously, on The Boys: With their focus on the JLA-esque ‘The Seven’ offset by a short-term lack of

psycho-drama, Butcher has changed the focus of Da Boys to look at a very X-Men group of heroes.Â  Sending Wee Hughie undercover as newbie superhero”Bagpipe,” Butcher dispatches the rest of the team to find the truth about the suicide of founding G-Man (G-Woman?) Silver Kincaid and to finally ferret out what’s going on behind the scenes at Godolkin House.Â  Mother’s Milk manages to track down Silver’s family, only to find that she was stolen away from home decades ago, a suspected runaway, only to turn up superpowered some years later.Â  With an uncomfortable realization building behind him, Butcher orders Wee Hughie out of the G-Wiz house, but Hughie insists that he can save a few of his new friends.Â  But when the G-Men out “Bagpipe,” his friends are perfectly willing to murder him in order to protect their popularity and the wealth they expect to attain as G-Men.Â  Thankfully, The Frenchman and the Female of the Species having been backing Hughie up, and the twosome kills most of G-Wiz before they can kill Hughie.Â  Butcher tells the only survivor, a lad named Jamal,Â that Jamal will either spill his secrets, or Hughie himself will kill the supe with extreme prejudice.

This issue opens with a flashback, a letter written to the President of Vought-American (the corrupt corporation that created Compound V, the supes-making drug) offering a rare opportunity: a pre-fabricated superteam, no muss, no fuss, no applause, just throw money.Â  V/A, of course, took the bait, answering the question of where Godolkin gets his cash, while, in the woods, Jamal spills his guts to the Boys.Â  “He took us from our folks when we were kids, an’ he said we were gonna join the G-Men.”Â  Godolkin chose children, plying them with toys, with treats,Â withÂ a life of luxury, and dosing themÂ with Compound V, all the while maintaining his cult-like controlÂ over their social and sensory input.Â  Jamal reveals what happens when one of the G-Men steps out of line,Â explaining that returned-from-the-deadÂ hero NubiaÂ was killed by Silver Kincaid to protect the secrets of the group.Â  What’s the big secret?Â “There’s…Â  there’s a thing that happens early on.Â  Happens a lot,” reveals Jamal, and suddenly the whole team realizes the horrible, unsavory truth about WHY GodolkinÂ surrounds himself with lots of pretty young people…

Hughie sympathizes with the kid, asking why the older “heroes” let the assaults happen, and Jamal scoffs.Â  “You stupid mother&#@#er.Â  They don’t say $#!+ to him.Â  Some of them even join in.”Â  Jamal bursts into tears, screaming that once it happens, you want it to never have happened, but there’s no way out.Â  “No one wants to give up $#!+ like that.Â  If they do, they get…Â  taken care of.”Â  As if on cue, a teleporter pops in, chiming “Silence is golden!” and bashing Jamal’s brain’s out.Â  The Boys realize that they’re mere yards from Godolkin House, and that the scores of G-Men know that they’re there.Â  “There isn’t one of us that said no!!” cries Five-O from the crowd of heroes, as the Boys look on with varying degrees of horror.Â  Hughie’s face suddenly turns hard as he looks at the bodies of the kids who were his friends, and stalks toward the mansion.Â  “Let’s give them a #$&@in spankin’.”Â  Mother’s Milke, Frenchie, and the Female join in, and a bemused Butcher joins in.Â  “Worse ways to go that slaughtering &$@s like these,” he smirks, and the fiveÂ leather-coated bastardsÂ walk into what will obviously be a massacre.Â  But before they can so much as punch the fakeÂ Wolverine (which my mom said would make you go blind) Vought-American’s shocktroops arrive in black helicopters, and KILL EVERY SINGLE G-MAN WHERE THEY STAND.Â  One of the Vought suits steps out of the chopper, walks up to Butcher and drops some knowledge.Â  “Just so you know.Â  We can clean up our own $#!+.”

My reaction to this issue is roughly the same as Butcher’s at the end of the issue…Â  “$*@! me.”Â  The truth behind Godolkin’s child-slavery-sex-ring-super-team is as disturbing as it is blindingly obvious, and once again Garth Ennis manages to convey in very deft strokes the depravity of the superhumans, and making us all aware that Butcher’s crusade to take them down is more mercy killing than brutality.Â  Wee Hughie’s compassion for the G-Wiz kids and his rage at seeing them butchered (no pun intended) reminds us that he, of all the Boys, is still closest to normal, and the sheer soulless corporate evil of Vought-American is highlighted, underlined, and surrounded by blinking pink klieg lights.Â  Best of all, Darick Robertson is back on art chores, and man did I miss him during the issues he was off.Â  The Boys continues to be one of the best, most disturbing, most awesomely disgusting but irresistible reads on the stands.Â  The Boys Twenty-Nine earns a very impressive 3.5 out of 5 stars, and if you’re not reading it (and you’re over 18) you absolutely should be.