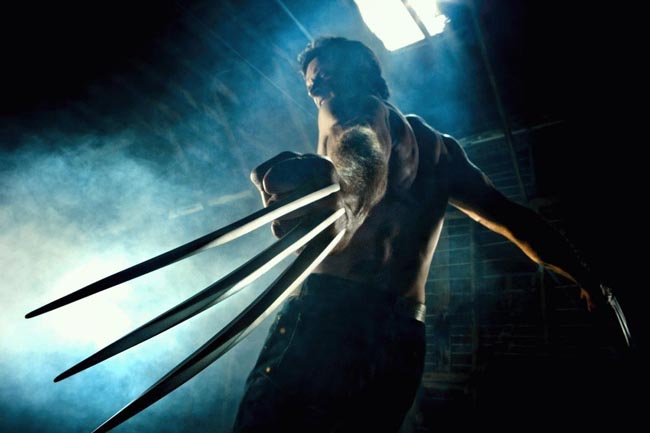 So the big news buzzing around H’wood yesterday was the report that a work print copy of the upcoming Wolverine movie had indeed been leaked onto the Intard-webz, and was making the rounds on the various torrent sites.Â  While this probably has many fanboys slobering more than usual, as they analyze every single frame of a movie, that isn’t the locked final print, and spouting their proclamations far and wide for whoever will listen in hopes of gaining some respect, and possibly losing their virginity (finally), the rest of us should just ignore it and wait until May.

More ramblings (and I do mean ramblings) on that, after the jump.

Why ignore it?Â  Remember, this is a work print that is being circulated; this is not a locked print, so anything can happen, including having most of the special effects, music track, or final scenes removed or tweaked in the final release.Â  The prospect of watching this in-progress movie is about as appealing as reading a Frank Miller comic book script before seeing all the art work by Jim Lee.Â  Sure it might be interesting to see what might happen, but until the polished issue hits the stand, it’s about as interesting as slowing down at a car accident to see if you can see a dead body.

I remember the hype surrounding episodes 1-3 of the Star Wars films, and how some people had early copies of the films before they debuted in theaters.Â  Sure there was the temptation of watching these in a dorm room at 3:00 AM, but in reality those copies sucked, and didn’t compare to the visual experience of seeing the films (good or bad) on the big screen.Â  The same is true for this copy of Wolverine; see it in the theater, it will be a more enjoyable experience.

Watching movies is a group activity.Â  There’s something special about experiencing a moment in time with your fellow fan.Â  Yes, the jackhole spilling nachos on your cardigan, while the dumb bunny in the back row blathers on her cellphone is extremely annoying, but that shared experience is more gratifying than five slobbering fanboys crowding around a 21-inch computer screen hoping to increase their superiority points over their fellow comic book fan when they go to the local comic book shop next Wednesday.

If you’ve followed this site for any length of time, you know I’m not a huge reader of the Marvel titles, and during a time when Wolverine is being exploited more than usual with the whole Wolverine Appreciation Month (you really think it is an appreciation month as much as it is a “let’s hype the upcoming movie” stunt?), having this pre-release movie available for anyone to download just doesn’t interest me.Â  In fact it wouldn’t surprise me if this wasn’t a stunt cooked up to add an extra layer of anticipation.Â  Does the movie look good?Â  It looks very interesting, and had I not been a father of a two-year-old, I’d probably be in line on opening day to see what Fox is offering to fans.Â  Do I want to see a half-assed copy that isn’t complete yet? Heck no.

“But Stephen, this is like karma…or something… for Fox for pulling that crap with Watchmen”

The other, more disturbing aspect of this stunt cooked up by either an angry former employee, or a crazed Intard-webz hacker is that it could seriously put a damper on future movie projects.Â  The slobbering fanboys who are feaverishly downloading this movie and then bashing it online, end up causing the built in Wolverine fanbase to reconsider whether or not they will see the film.Â  I truly believe that had the Intard-webz not gone ape-crazy over early images and news of The Spirit, that the film might have opened larger than it did.Â  And yes, I know there are other factors at work that contributed to the failure of the movie, but the Slobbering Fanboy Nation (I sense a T-shirt coming) played their part extremely well.Â  With The Spirit tanking, followed by the a less the box office busting release of Watchmen, another failure could cause studios to rethink the importance of comics as a source of big box office monies.Â  And that just hurts everyone.

“If I see it now Stephen, I’ll have more friends because they will flock to me because I have the inside information”

Wolverine hits theaters in May, that’s not that long of a wait, and that feeling of superiority you’re going to get now, still won’t earn you anymore respect.Â  And it’s not going to get you laid – unless being the love doll to a large tattooed man in prison is your idea of getting laid. The FBI is now involved, and ISPs are more willing than ever to to turn in private information about its subscribers at the mere mention of a court order.Â  So those that are doing the downloading are going to get caught, and retribution will most certainly be involved. Â  If you know someone who has the moive, politely ask them to delete it (not likely to happen), or refuse to view it if offered. It’s the honest thing to do, and keeps your good Karma…or something… going for a while longer.

Yes, I realize this statment might be perceived as going against the very name of a site called Major Spoilers, but I still believe that waiting until Christmas morning to open a present is much more satisfying than sneaking into your parent’s closet and learning what gifts you having coming to you.Â  Knowing that you’re getting socks ahead of time is indeed depressing.Â  And while finding out you got socks Christmas morning is a bit of a letdown, it’s not as bad as finding out you’re going to jail because you peaked early.