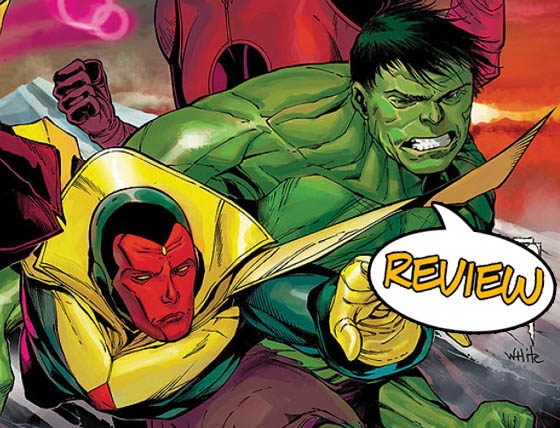 — MAJOR SPOILERS EXCLUSIVE: THE MISSING DIALOGUE FROM THIS WEEK’S COVER —

Previously, on Mighty Avengers:Â  In the wake of Secret Invasion, Janet Van Dyne was dead, Iron Man was discredited, Captain America was back, Thor was less than impressed with his old friends, Hulk was all over the place, and Henry Pym was very upset to find that his whole life had been co-opted by a monstrous alien shapeshifter AND THAT NO ONE HAD NOTICED.Â  Vowing to try and redeem himself, he created yet another costumed identity, this one in tribute to his fallen ex-wife, and called himself The Wasp.Â  When a crisis arose, and none of the usual suspects came to save the day, The Scarlet Witch (?) began collecting Avengers from around the globe to unite and head to Wundagore Mountain to stave off the menace of C’Thon (who I believe is C’Thulu’s less popular cousin.)Â  And then,Â Matthew somehow missed an issue.Â  As an experiment, we’ll play catch-up here, and see if the story is self-evident…

In the first issue of this arc, we saw Jarvis and Hercules attempting to find Thor, and finding that Oklahoma no longer exists on the map or in the physical universe.Â  This issue opens with Loki and Thor in Asgard, desperately seeking to figure out what is happening.Â  Her magicks and his… abilty to hit things with a hammer (much like a big blonde Handy Manny) fail to make anything clearer, and we cut to a confrontation between Iron Man and the New Wasp.Â  Apparently, Stark has done his standard issue Stark thing, waltzing in and taking over everything.Â  When Hank asks Tony why he thinks he’ll have a better handle on the situation, and Iron Man replies, “Three words.Â  You’re.Â  Hank.Â  Pym.”Â  Ouchie…Â  Iron Man adds insult to injury by completely ignoring Pym and formulating a plan to take outÂ a demon-possessed Quicksilver, and things are even more condescending when Hercules, U.S. Agent and the others instinctually follow the man in the big red metal suit.Â  A not-at-all subtle point is made when Iron Man says “One super-soldier.Â  One god.Â  That’s all the Avengers I need.”Â  A shot at those who pooh-pooh this series because of it’s lack of the Big Three, I’ll wager.

Iron Man’s brilliant plan?Â  DESTROY THE MOUNTAIN, freeing endless legions of evil thingies from their slumber, and endangering millions of people.Â  Scarlet Witch appears, and begins whispering to Bruce Banner, “Your world could die…Â  Are you angry?Â  YOU could die.Â  How does that make you feel?”Â  C’thonsilver finds himself the recipient of a fistinnaface from The Incredible Hulk, while Hank and Amadeus Cho have a brainstorm together.Â  Using a spare Ant-Man helmet that Amadeus cobbled together, he scrambles the signals going to Quicksilver’s brain, causing him to be unable to speak, and thus depriving him of his magic.Â  At the same time, The Vision reads the spellbook in which the mind of Quicksilver has been trapped, sucking C’thon into the book, and (somehow) downloading Quicksilver into his own hard drive.Â  Hank and his “also-rans” hav saved the day, and Pym quickly zips off to find his old pal Tony, realizing that Iron Man isn’t himself lately.Â  Tony, once again, has three word for Hank and his plan to run a new Avengers branch: “Don’t screw up.”Â  The world is saved, and for once, they know who did it, as the entire planet rallies behind the former Yellowjacket and his Avengers.Â  In Oklahoma, things are returned to normal, and the locals cheer Thor for saving the day, but he tells them it was the Avengers who did the deed.Â  His little sister Loki laughs in her secret chamber, and a shocking reveal about the identity of the “Scarlet Witch” is made.

I’m not a big fan of the art in this issue, as Khoi Pham is not one of my favorites, but the redesign of the Wasp is well-done, and the storytelling is mostly clear throughout.Â  I’m bothered by the fact that Jocasta is virtually invisible throughout the issue, and the battle sequence never seems as epic as it should due to claustrophobic tightness in the staging, but it’s not overtly unpleasant.Â  Dan Slott’s story is good, but there are some parts that feel very telegraphed, and the use of Iron Man (Crap… ON… TONY STARK!!!!)Â as a complete jerk felt…Â  I don’t know.Â  Not exactly wrong, as it’s just a magnification of the whole “futurist” thing he’s been doing for years now, but the situation was just a bit forced.Â  Slott does his best work on Amadeus Cho, and his Hulk is oddly clever, but overall the issue never quite gels for me.Â  Maybe once the roster is actually a roster, things will feel more complete, but honestly, the whole point of these three issues was to overturn several years of “Crap on Yellowjacket” and, in that it succeeds.Â  Overall, the good and the questionable balance out into an okay read with some real potential.Â  Mighty Avengers #23 earns 2.5 out of 5 stars, and with a stable cast, I think this book could really go someplace.