Or – “Where It All Gets Weird… Well, Weirder Anyway.” 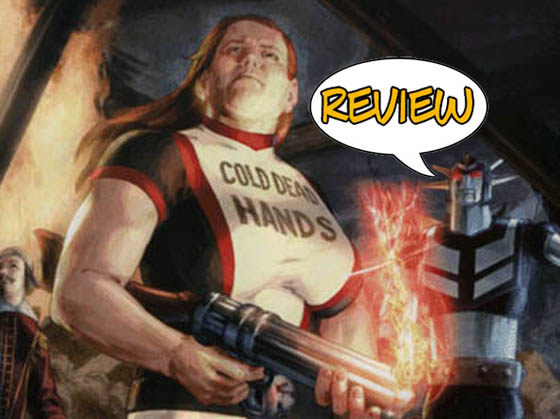 Neopolis is not the place to go if you’re easily confused, frightened by change, or in any way uncomfortable with the new and different.Â  For the officers of Neopolis P.D., each day is a new trial, with witches and werewolves, cyborgs and super-people, gawds and telepaths walking the streets…Â  So far, the officers of Top 10 have had to deal with new rules and regulations and a whole new brand of ugly on the streets as mysterious wizards are giving young kids magic words to turn them super.Â  The question is, how can a cop protect the innocent when his hands are bound with red tape?

As we open our festivities this time around, we find Dust Devil waiting for his (extremely late) partner to show up for work, only to find his partner seriously hung over, barely functional, surrounded by empties…Â  Of course, since he mainlines electricity, the empties consist of dozens of dead batteries.Â  By the time they get to the morning briefing, it seems that all hell has broken loose, with officers missing, support staff resigning, and some sort of riot in the home dimension of the new comissioner.Â  Dust Devil takes one for the team, lying to the Sarge that it was HE who got plastered and was hung over, trying to save his partner’s job.Â  Irma Geddon goes to see the staff psychologist, who has an interesting bit of advice for her:Â  “Life sucks.Â  It sucks because you want everything to last, and it never does.Â  And the one thing that would make you a lot happier about this worldis if you just stopped caring.”Â  Heh…

Shock-Headed Peter successfully makes time with new officer Girl One, but before she fully succumbs to his “charms,” several prisoners break free (thanks to the little wizard giving them power words to blow out of prison.)Â  In an awesome moment, it’s Irma who saves the day, blasting the criminals with a giant gun she busted out of impound (totally against the new commissioner’s regulations.)Â  The super-criminals are quickly taken into custody, but Peter has been struck by some residual magical energy, and flips out, melting fellow Officer Joe Pi in a fit of rage, while lashing out at another cop.Â  Shock-Headed Peter is drummed off the force, blaming everyone but himself for what has happened, leaving his badge and gun in a melted mess on the Captain’s desk as we bring this series to a close.

The real charm of the original Top 10 series (not “Beyond The Farthest Precinct,” which frankly lacked in all aspects but art) was delivered by the in-jokes.Â  A visit to a hospital could easily result in cameos by Doctor Who, Doctor Smith, and Doctor Doom, while a visit to the robotic ghetto would almost certainly be filled with Robbie the Robot and other cameos.Â  This series, by original Top 10 artists Gene Ha and Xander Cannon, brings those visual cues back, and their plotting, while not as byzantine as Alan Moore’s, is still well-handled.Â  I was confused by this particular series, in that I would have sworn it was solicited as a 5 issue series, and the closing didn’t really resolve a lot of the plot points that the series opened.Â  A quick check of Wildstorm’s publishing schedule shows a Top 10 special in the works, so hopefully more is to come…Â  Either way, this issue almost captures the complete awesome that was the original series, and Top 10 – Season 2 #4 ranks an impressive 3 out of 5 stars overall.