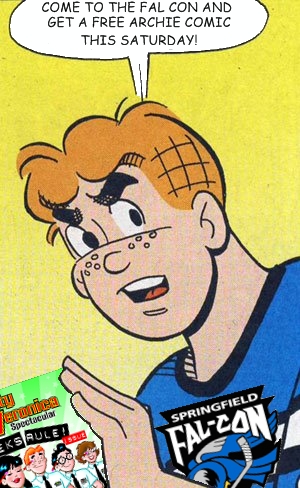 Check out the press release following after the jump for more information.

The Springfield Falcons, proud members of the American Hockey League, announced today that the first annual Springfield Fal-Con will take place on March 21st, 2009 before and during the home versus the Hartford Wolf Pack.

â€œThe Springfield Fal-Con will be an exciting and unique event for sports collectors and fans of comic books and other pop culture phenomenonâ€, said Mike Thompson, Falcons Vice President of Corporate Partnerships. â€œNot only will some of the best sports and comics collectibles dealers be at the MassMutual Center on March 21st, but the Hartford Wolf Pack visit Springfield for the last time during the regular season.â€

The Springfield Fal-Con will begin at 2:00 pm on Saturday, March 21st and continue through the Falcons-Wolf Pack game that night. Approximately 25 different vendors will be exhibiting on the MassMutual concourse throughout the event, including New England Comics, the largest comic store chain in Massachusetts. Chris Famulari, manager of New England Comics, said â€œWe are proud to announce that New England Comics, Massachusettsâ€™ biggest & best comic book retailer, will be attending the 1st annual Springfield Fal-Con. It is a great opportunity to reach a brand new audience as well as long time fans of comic books & collectibles. It looks to be great fun for collectors & hockey enthusiasts alike!”