Or – “Last Survivor Of The Nerdly Trio…” 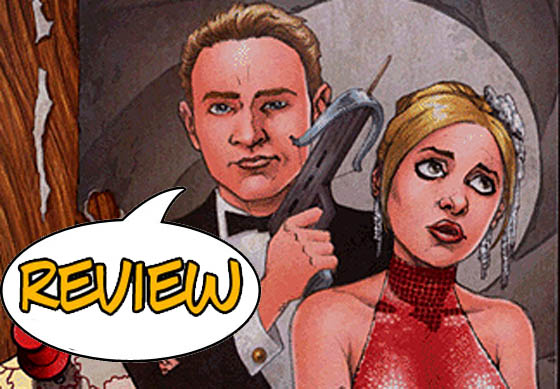 Though the television series adventures of Buffy the Vampire Slayer ended some time ago, the comic book continuation of all things Buffy-like chugs along apace.Â  We’ve seen the lives of characters major and minor, from Slayers to exes to vampire airheads, as all the while one of my favorite characters toils in secrecy.Â  The only man to ever outgeek Xander Harris, he somehow managed to make both Spike and Angel feel like out-of-touch losers…Â Â  But what has the “Lost Season” of Buffy got in store for Andrew?

Previously, on Buffy The Vampire Slayer:Â  An ongoing conspiracy to take down the slayers (dubbed “Twilight” after it’s mysterious masked super-powered leader) has gained both momentum and assistance, as formerÂ Cordelia-follower Harmony Â now has her own reality show, all about being a vain, self-obsessed blood-sucker.Â  While Donald Trump, Kim Kardashian, Gene Simmons, Ozzy Osborne and Oprah contacted their lawyers, the various Slayerettes headquartered in Buffy’s Scottish safehouse ( because safe-castle just doesn’t make any sense, and besides the place got blowed up real good anyway) get to deal with being disliked by the world at large.Â  Buffy, of course, has been there, done that, and kept the souvenir snow globe, but the other Slayers aren’t used to hiding out.Â  Add to that the Rogue group of Slayers led by wacky Jeff-Hardy-haired Simone, and there’s a public relations disaster aborning…

We open with a close up of running feet, with overarching narration.Â  “The thing about the Slayer organization is that we’re not just coworkers…Â  We’re family.”Â  Andrew races down the hal, yelling for Buffy, finally crashing into the command center, only to have Buffy offer to force the door down his throat.Â  Andrew excitement comes from something he’s picked up in his surveillance: Simone’s second in command, Nisha, has been captured by a rogue spider-demon.Â  Buffy and Andrew head out together (after she insists to Xander that he’s matured.)Â  A hilarious sequence entails where Andrew talks and talks and talks, sliding from topic to topic and referencing a thousand different geek topics (much like the first half hour of the Major Spoilers podcast, come to think of it) before he mentions that Daniel Craig is now his favorite Bond.Â  “STOP,” cries Buffy.Â  “You said Daniel Craig.Â  I like Daniel Craig.”Â  Heh…Â  They bond for a moment about how awesomeÂ the new 007 Â is, with Buffy enthusing about his swim trunks (“I have no opinion about those,” says a suddenly embarrassed Andrew) before they arrive at their location:a web of steel and salvage built by the spider-demon.

They quickly free Nisha, but she spills the beans that she wasn’t captured by mistake… Andrew bred the demon, and used her as bait.Â  Andrew admits that it’s the truth, just as Simone beams in, grabs her partner and the giant spider, and teleports away.Â  Luckily, Andrew keeps his feathers numbered for just such an emergency, and can track it, but he’s afraid Buffy won’t trust him, and reveals that he only did all this to try and keep her from blaming him for Simone’s going bad.Â  “Losing an insande, gun-loving punk slayer isn’t the way to make me lose faith in you,” says Buffy.Â  “Lying to me is.”Â  They track the monster to an island in the middle of nowhere, where Simone has laid a trap of her own, to catch… Andrew?Â  She’s focused on payback for when he was her Watcher, but the Buffster ain’t interested.Â  She leaps to a waiting racks of swords, and the two Slayers launch into one on one combat while Simone’s rogues look on.Â Â  Simone can’t beat Buffy in one-on-one combat, so she lets her girls get involved, but Andrew’s Italian squad of slayers shows up to even the odds.Â  Buffy grabs the gun, points it at the rogue, and lays down the law.Â  “Now…Â  Give me back my nerd.”Â  Heh.Â  Buffy and Andrew return home, and he worries about capturing the demon he has unleashed, but Buffy’s not worried.Â  “You’re part of the family now.Â  Get used to screwing up for good reasons,” she informs him.Â  “It’s what we do.”Â  Andrew is stunned to realize that he finally has somewhere to belong, and sits in silence for a few seconds before a smile blossoms on his face and we fade to black.

This is a really interesting issue, giving some depth to a character who is often used for sheer comic relief, and even making him an almost tragic figure without undermining his super-geek mystique.Â  If we were to look at this series as a season of television episodes, we’re hitting that point in mid February where we get some depth before the overarching plotlines kick into gear and we head out for the big finale in May.Â  It’s a well-done series, and the geek cred is tangible (since I followed a great deal of the ephemera that Andrew was yammering about for a page and a half) and gives us a nice little sword battle and some tension to boot.Â  Georges Jeanty does an impressive art job this issue (it helps that Andrew is one of the characters who is drawn closest to his real life actor model)and Buffy series writer Drew Greenberg has a real ear for the dialogue that makes this series tick.Â  Buffy the Vampire Slayer #23 is a good ‘un, earning 4 out of 5 stars, adding another notch in the stake of Season 8.Â  The onlyÂ negative of thisÂ here issue comes with the realization that this series was slotted to run approximately 3 years, and we’re closing in on 2 years now, meaning that the end has started to move into sight.