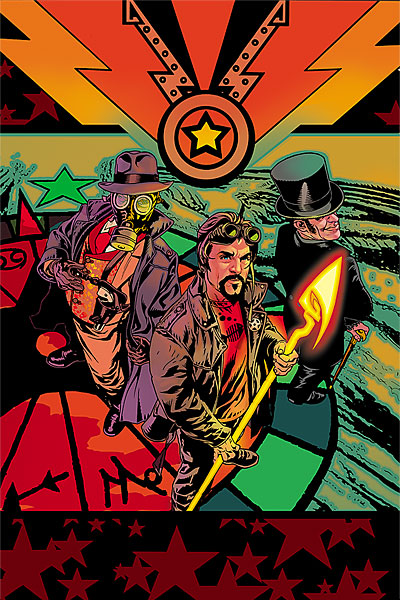 Nothing like jumping on the bandwagon late.Â  The New York Times has unveiled a new feature for the Arts section that offers up a Graphic Novel Best Seller List.

And today The Times introduces three separate lists of the best-selling graphic books in the country: hardcover, softcover, and manga. Weâ€™ll update those lists weekly in this space, and offer a few observations along the way.

Take the jump for the Graphic Books Best Seller List (hardcover), then head over to the NY Times site to see where the Watchmen ranked.

2. Eerie Archives, Vol. 1 by various. (Dark Horse, $49.95.) The gruesome magazine, following in the steps of its cousin Creepy, gets the hardcover collection treatment.

4. Batman: R.I.P. by Grant Morrison and Tony Daniel. (DC Comics, $24.99.) Thomas Wayne, the father of the caped crusader, is cast in a sinister light.

5. Walking Dead, Vol. 4 by Robert Kirkman and Charlie Adlard. (Image Comics, $29.99.) The gripping story of the human survivors in a world overrun by zombies continues.

6. Beanworld, Book 1 by Larry Marder. (Dark Horse, $19.95.) The fantasy series, about a world of bean characters, gets the deluxe reprint treatment.

7. Mighty Avengers Assemble by Brian Michael Bendis and Frank Cho. (Marvel Comics, $34.99.) The first adventures of a new team of heroes gets an oversized collection.

8. Incredible Hercules: Love and War by Fred Van Lente and Clayton Henry. (Marvel Comics, $19.99.) The demigod finds himself in Atlantis â€“ just in time for a war.

9. Batman: The Killing Joke by Alan Moore and Brian Bolland. (DC Comics, $17.99.) This critically acclaimed story from 1988 offers a possible origin for the Joker.