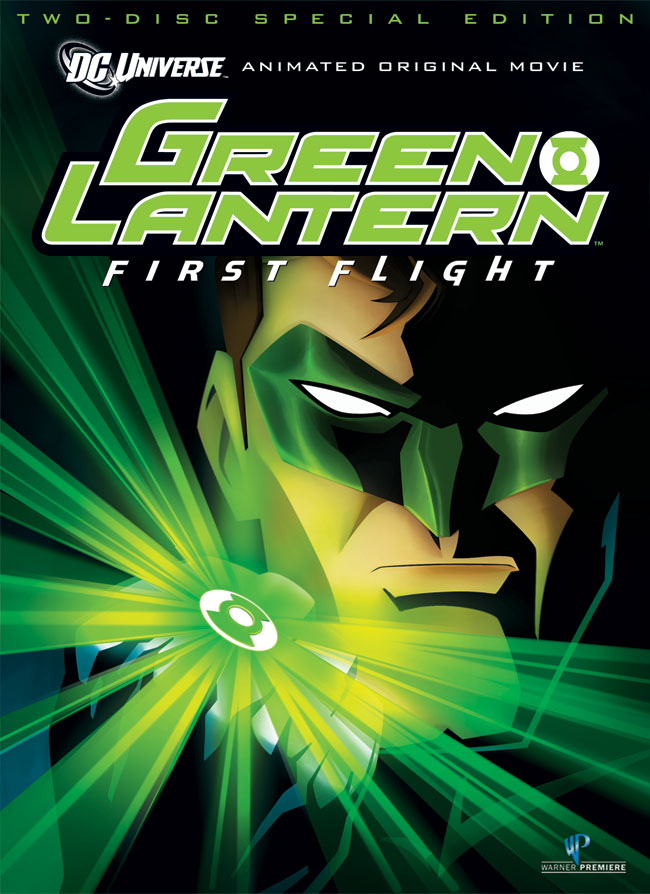 BURBANK, CA, (February 27, 2008) â€“ The fabric of intergalactic justice is threatened â€“ until Hal Jordan arrives for his initial mission â€“ in the animated Green Lantern: First Flight, the fifth entry in the popular DVD series of DC Universe Animated Original PG-13 Movies. A co-production of Warner Premiere, DC Comics and Warner Bros. Animation, the illuminated heroâ€™s first-ever full-length animated film is set for release by Warner Home Video on July 28, 2009.Â  Green Lantern: First Flight will be available as a special edition 2-disc version on DVD and Blu-Rayâ„¢ Hi-Def for $29.98 (SRP) and $34.99 (SRP), respectively, as well as single disc DVD for $19.98 (SRP). Order due date for all versions is June 23, 2009.

Green Lantern: First Flight Blu-Ray versions will include all the great extras as the 2-disc
Special Edition as well as an additional two episodes of Justice League picked by Bruce Timm.

â€œWarner Premiere along with our partners at DC and Warner Home Video has enjoyed great success with the DC Universe titles, and weâ€™re proud to present this first feature-length animated Green Lantern film,â€ said Diane Nelson, President, Warner Premiere.Â  â€œâ€˜First Flightâ€™ is a compelling story and a great vehicle to tell this iconic characterâ€™s story to both new and longtime fans.â€

â€œWarner Bros. Animation is known for creating outstanding animated properties and has a legacy built upon some of the greatest characters ever imagined,â€ said Warner Bros. Television President Peter Roth, who also oversees television animation for the Studio. â€œProducer Bruce Timm and his creative team continue that rich tradition with this terrific DVD feature.â€

â€œAs one of the true core DC Super Heroes, Green Lantern has captured the imagination of pop culture enthusiasts with his illuminatingly human approach to justice throughout the universe,â€ said Gregory Noveck, Senior VPÂ  Creative Affairs, DC Comics. â€œAlan Burnettâ€™s script captures the essence of DCâ€™s canon of Green Lantern tales, and provides a fine launching point for future stories with this character.â€

Apart from this animated release, Warner Bros. Pictures is currently in pre-production on a new â€œGreen Lanternâ€ theatrical motion picture, to be directed by Martin Campbell, bringing the popular DC Comics super hero to the big screen for the first time.

About Warner Premiere:
Warner Premiere is Warner Bros. Entertainmentâ€™s new direct-to-consumer production company focused on the development, production and marketing of feature-length content, as well as short form digital content for the growing home entertainment market. Warner Premiere is committed to being at the creative forefront in the evolution of quality product in the direct-to-DVD business and the digital space, creating material that exemplifies the commitment to story, production and brand equity for which Warner Bros. is known.

About DC Comics:
DC Comics, a Warner Bros. Entertainment Company, is the largest English-language publisher of comics in the world and home to such iconic characters as Superman, Batman, Wonder Woman and the Sandman. These DC Super Heroes and others have starred in comic books, movies, television series (both animated and live-action) and cyberspace, thrilling audiences of all ages for generations.Â  DC Comicsâ€™ Web site is located atÂ  HYPERLINK “http://www.dccomics.com” www.dccomics.com.

GREEN LANTERN and all related characters and elements are trademarks of and Â© DC Comics.