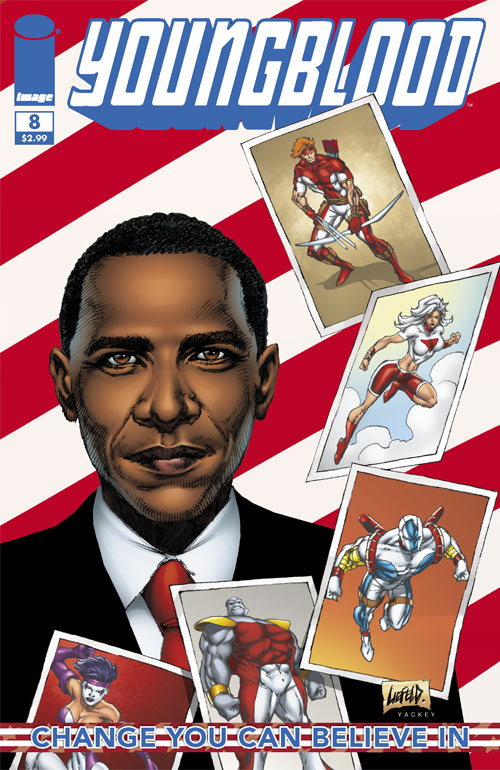 Rob Liefeld’s return to YOUNGBLOOD with President Barack Obama exploded with a nearly instantaneous sell-out despite a very significant over print.

“WOW! It’s very exciting and a great honor to come back and the result be an instant sell out for the book! I’d also like to thank President Obama for picking such a great new line up for YOUNGBLOOD, obviously he has the magic touch,” said Liefeld. “That said, YOUNGBLOOD #8 is just the prelude to a much larger story. If you liked it, you’re going to be blown away by the next issue in May. Given YOUNGBLOOD’s status as a government sanctioned superteam, you can bet on our nation’s newest President being involved from the very beginning!”

The YOUNGBLOOD appearance by President Obama marks the very beginning of Liefeld’s return to his seminal creation. Starting in May, Rob will return to the book in full force, full time as he takes over the writing and illustrating duties to present a whole new direction for the team. This news comes on the heels of mega-director Brett Ratner (X-MEN 3, RUSH HOUR) announcing he’ll be taking the reins of the upcoming YOUNGBLOOD feature film.

Image Comics is a comics and graphic novels publisher formed in 1992 by a collective of best-selling artists.Â  Since that time, Image has gone on to become one of the largest comics publishers in the United States. There are currently five partners in Image Comics (Robert Kirkman, Erik Larsen, Todd McFarlane, Marc Silvestri, and Jim Valentino), and Image is currently divided into four major houses (Todd McFarlane Productions, Top Cow Productions, Shadowline, and Image Central). Image comics and graphic novels cover nearly every genre, sub-genre, and style imaginable, offering science fiction, romance, horror, crime fiction, historical fiction, humor, and more by the finest artists and writers working in the medium today. Visit Image Comics.