Spike: After the Fall Hardcover Arrives This Month 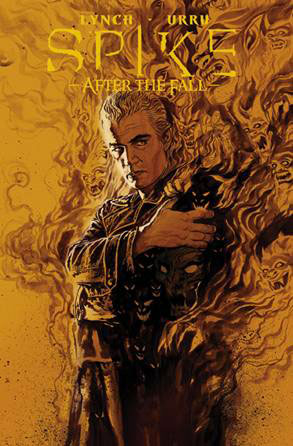 Experience Spikeâ€™s adventures After the Fall in this continuation of the best-selling Angel series from IDW, in stores this month.

Vampire, poet, murderer, lover, hero, or soulless fiendâ€“ William The Bloody, Spike to his â€œfriends,â€ has been called many things over the centuries. And now that L.A. has fallen into Hell, he may earn one more â€“ Lord. Or possibly â€œdust.â€ It all depends on how things turn out in his immediate futureâ€¦ which isnâ€™t looking too good in a city overrun by every kind of demon, monster or horrifyingly tentacled â€œthingâ€ imaginable. Including Illyria, who seems to be having a serious identity problem.Â  One minute sheâ€™s happily tearing down buildings or punching something sticky, the next sheâ€™s Fred, vulnerable and confused.

Reluctantly, Spike becomes the leader of a ragged band of survivors and tries to figure out whatâ€™s up with his platonic (and blue) girl friend. Unfortunately, a nasty cadre of hellish imports want to take over Spikeâ€™s turf, and at least one of them has a bad habit of literally sucking the life out of her victims.

Yet when Spike becomes a prisoner and a plaything for this band of beastly babes, it may take more than Illyriaâ€™s otherworldly power to save him. But Spike never goes down without a fightâ€¦ not even when the odds are stacked against him. Thatâ€™s usually when he does some heroicâ€¦ or incredibly stupid.

Originally published as Spike: After the Fall Issues #1-4, this handsomely designed hardcover edition collects the entire story arc and presents an Art Gallery with exclusive alternative covers by Franco Urru and The Sharp Bros.