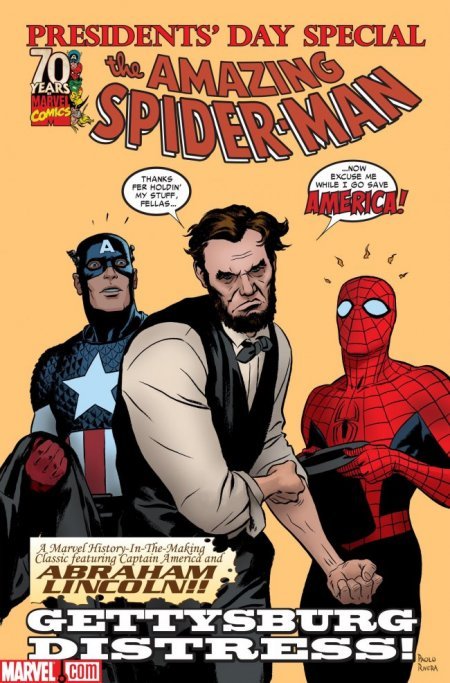 To celebrate the holiday, Marvel is releasing a free digital comic featuring Captain America and Spider-Man at the Gettysburg Address.Â  This digital comic arrives hot on the heels of The Amazing Spider-Man #583, where Spider-Man met President Obama.

â€œWe were completely blown away by the overwhelming response to the Spidey Meets the President storyline.Â  Comic book shops have not been able to keep it on shelves, so we thought it would a fitting way to celebrate Presidentâ€™s Day by offering free online access to all fans to view and read the storyline â€“ including some exclusive new content â€“ only at Marvel Digital Comics Unlimited,â€ says Dan Buckley, President of Marvel Publishing.Â  â€œAnd in celebration of President Lincolnâ€™s historic Bicentennial, we could think of no better tribute in the Marvel Universe than to have Spider-Man and Cap honoring one of his enduring legacies, the Gettysburg Address.â€

While the â€œGettysburg Distressâ€ issue is free, users will need to create an account to access the content.Â  I wonder when Marvel will release Spider-Man meets Nixon, or the super-secret Wolverine/Jimmy Carter crossover issue.