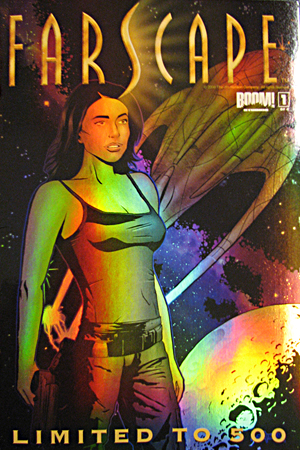 BOOM! Studios will be offering a limited holofoil edition of their sold out comic FARSCAPE #1 available exclusively during WonderCon 2009.

The holofoil cover, featuring FARSCAPE’s main character Aeryn Sun, is limited to 500 copies, and will only be available at the BOOM! Studios booth (#619) during WonderCon 2009. Featuring a gold metallic finish on a cardstock cover, it will be one of the most special limited edition collectibles ever made in association with FARSCAPE due to its extremely low print run.Â  It is unavailable anywhere else.

WonderCon runs from Friday, February 27th to Sunday, March 1st, 2009 at the Moscone Center South in San Francisco, and BOOM! Studios will be at Booth #619.

This special limited edition comic is the second of the now wildly successful series of three special covers. The first cover had its debut at New York Comic Con 2009, and sold incredibly well.

“The fan response to the first cover at NYCC was amazing.” said Chip Mosher, Director of Sales and Marketing.Â  “Not only are these holofoils are great collectibles, and make awesome gifts for that â€˜scaper in your life, bottom line, theyâ€™re just fricking cool to look at!”

FARSCAPE #1 was released to near unanimous praise December 24th, 2008. After selling out in five days, FARSCAPE #1 received a second printing that hit store shelves early February. FARSCAPE #2 was released on February 4th, 2008 and sold out in seven days. A second print will hit shelves soon.

Debuting on the SCI-FI Channel in 1998, FARSCAPE follows the adventures of astronaut John Crichton, who has a freak accident during an experimental space mission that catapults him across a thousand galaxies to an alien battlefield. Suddenly, he’s trapped among alien creatures wielding deadly technology – a battle that 20th century sci-fi pop culture never prepared him for. Hunted by a merciless military race, Crichton begins his quest for home from a distant galaxy.

A groundbreaking award-winning sci-fi production, FARSCAPE from The Jim Henson Company and [HALLMARK] has become a global favorite. Named by TV Guide as one of television’s “Best Cult Shows Ever” and most recently named by EMPIRE Magazine as one of the “50 Greatest TV Shows of All Time,” FARSCAPE is known for the overwhelming fan-based campaign that led to its miniseries production.Â  The show has continued to find new audiences as it airs in syndication and is available on iTunes and DVD.