The heroes of the Republic must deal with an altogether different kind of enemy when they face an evil and diabolical mad scientist in â€œBlue Shadow Virusâ€ and â€œMystery of A Thousand Moons,â€ a special double feature of the hit animated series STAR WARS: THE CLONE WARS, premiering as an all-new, two-part episode on 9 p.m. ET/PT Friday, Feb. 13, on Cartoon Network.

In â€œBlue Shadow Virus,â€ PadmÃ© Amidala is captured while searching for a secret Separatist bio-weapons lab run by Dr. Nuvo Vindi (portrayed by science-fiction icon Michael York), a scientist as cold and calculating as he is evil. While they manage to find the mad doctor and uncover his scheme, they are too late to prevent the release of his deadly concoction â€“ leaving Anakin Skywalker and Obi-Wan Kenobi just 48 hours to find the elusive antidote in â€œMystery of a Thousand Moons.â€

Best known for his role in 1975â€™s Loganâ€™s Run, York brings a sense of manic enthusiasm and righteous fervor to the role of Dr. Vindi.

Vindiâ€™s plan for galactic cleansing provides an unusual mission for the heroes of the Clone Wars, pitting them against an unseen threat that cannot necessarily be conquered through direct aggression.Â  According â€œBlue Shadow Virusâ€ director Giancarlo Volpe, this provides an opportunity to see how the characters respond to a new kind of pressure.

â€œThis episode is really about refortifying the Anakin-PadmÃ© dynamic,â€ Volpe says. â€œShe is his universe and so heâ€™ll compromise the mission to make sure her safety comes first. Itâ€™s not what a Jedi is supposed to do, but thatâ€™s Anakin.â€

Once PadmÃ©, Ahsoka and the clones become infected, however, the stakes are raised, leaving Anakin and Obi-Wan to sort out a solution in â€œMystery of a Thousand Moons,â€ according to director Jesse Yeh. Their quest for the cure serves as a perfect vehicle to spotlight the relationship between the two Jedi, emphasizing their differences as well as their respect for one another. 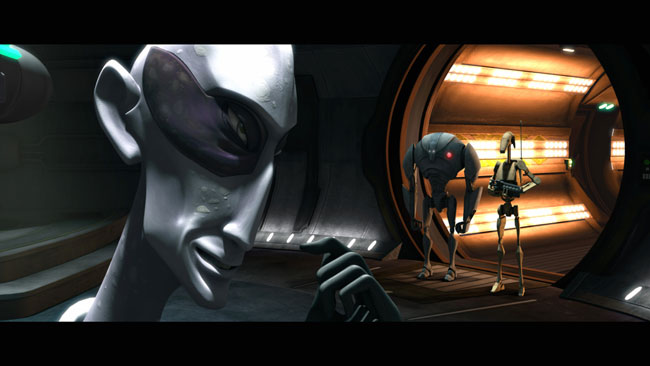 â€œObi-Wan and Anakin do things so differently, yet they rely on each other so much that they would trust each other with their own lives,â€ Yeh says. â€œObi-Wan is more than just a mentor trying to teach Anakin the path of a Jedi Master. When needed, he can also be an understanding friend of Anakin and stand by his decisions as well â€“ even if sometimes those decisions could mean a violation of the Jedi teachings.

â€œAt the same time, Anakin tries to prohibit his own impulsive thoughts and emotions from taking over, and he is willing to do so totally out of the respect and trust he has for Obi-Wan â€“ even when the life of his true love is at stake at the time.â€