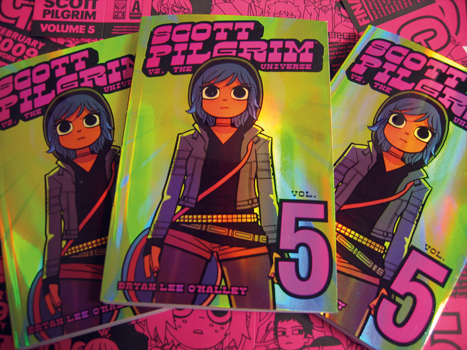 Oni Press is gearing up to have a good time at the 2009 New York Comic Con with the big release of Scott Pilgrim vs. The Universe.Â  Oni has sent Major Spoilers a rundown of its events, panels, and signing for the convention.

Oni Press is in New York City for this year’s New York Comic Con! February 6th – 8th weâ€™ll be strutting our stuff at booth #1413. Come by and check out our eclectic library of titles including the premiere of:

SCOTT PILGRIM VOLUME 5: SCOTT PILGRIM VS THE UNIVERSE
by Bryan Lee O’Malley
Scott Pilgrim is at the top of his game: he just turned 24, he moved in with the girl of his dreams, and he defeated at least half of The League of Ramona’s Evil Exes. But life at the top is treacherous and if things can’t possibly get any better for Scott, it means they can only get infinitely worse! Scott’s band is in total turmoil, his own exes have all boarded the train to crazy town, and Ramona’s evil exes have started appearing in pairs! And what’s up with Ramona, anyway? She’s been acting kinda weird ever since she and Scott moved in together. It’s the second-to-last volume of the Scott Pilgrim series and it looks like Scott’s precious little life has come back around to bite him in the butt!

To celebrate the release of the eagerly anticipated next chapter of the SCOTT PILGRIM SERIES, Oni Press is pleased to announce the following events and specials:

AFTER WORK SIGNING AND MIXER
Wednesday, February 4th from 7-9pm at Rocketship Comics in Brooklyn.

Big thanks to Raina Telgemeier and Dave Roman; the SMILE release party was enormously fun, and a lot of happy kids left with signed copies of a great book. Below, we have some (poor quality) photos of Raina signing, and everyone watching her terrific slideshow … Thanks to everyone who stopped by!

SCOTT PILGRIM VOL. 5 FOIL COVER
If you’re one of the lucky few to grab a copy before they’re sold out, you’ll notice that the entire first printing of SCOTT PILGRIM VOL. 5 has a spectacular foil cover. Available anywhere comics are sold and at no additional cost!

LIMITED PRINTING â€œI SCOTT NYâ€ SHIRTS
Printed specially for the release of SCOTT PILGRIM VOL. 5, these striking ringer tees are sure to make a statement. We’re not sure what that statement is, but we know that these are only available at the Oni Press booth during New York Comic Con and at the Jim Hanley’s Universe and Rocketship signings, while supplies last. 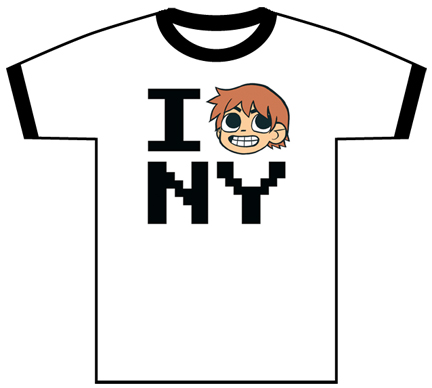 SCOTT PILGRIM CUBEES
What do you mean â€œwhat’s a cubee?â€ It’s… you know, a cubee! The papercraft experts from Cubeecraft have been kind enough to work up an entire line of cubees from the SCOTT PILGRIM series. These will be available on the Oni Press website (www.onipress.com) as well as the Cubeecraft website (www.cubeecraft.com) starting the week of the convention and are totally, utterly, and completely FREE! So go get your favorite character from the series and decorate that sad cubicle with square cubees! 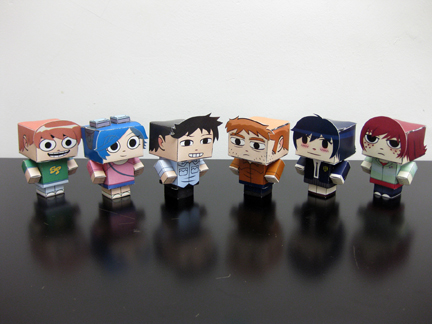 Oni Press is pleased to announce the following signings throughout the weekend at booth #1413 during scheduled times. Please check the Oni Press website at www.onipress.com, or come by the booth during the convention to see that day’s signing schedule.

Saturday, 11:00-12:00 in room 1A21: How Not to Break into Comics
There have been countless articles and panels on how to break into comics, but very few on how not to. Come join Randal C. Jarrell (Managing Editor at Oni Press) and other industry insiders as they discuss the common and often hilarious mistakes people make when trying to break into the industry.

Sunday, 2:45 PM-3:45 PM in Kids Zone 3: Pillaging History For Story Ideas
Pirates, ninjas, gunslingers, and knights â€“ history is packed with events, characters, and settings that you can use to make your own original stories! All you need is to know whereto look. Chris Schweizer (The Crogan Adventures) will help you will help you learn how to take real history and use it to make the types of stories that you want to tell.

Sunday, 1:30 PM-2:30 PM in room 1A14: Scott Pilgrim vs. The Panel!
Bryan Lee O’Malley (winner of the Doug Wright, Joe Shuster, and Harvey Awards) sits down with NYCC to discuss his ground-breaking, slice-of-life series Scott Pilgrim. From its genesis to the NYCC release of volume five, O’Malley speaks frankly about where Scott Pilgrim came from and where the series is going from here. With moderation by Douglas Wolk and a fan Q&A to close the discussion, this is a must see event of NYCC 2009!