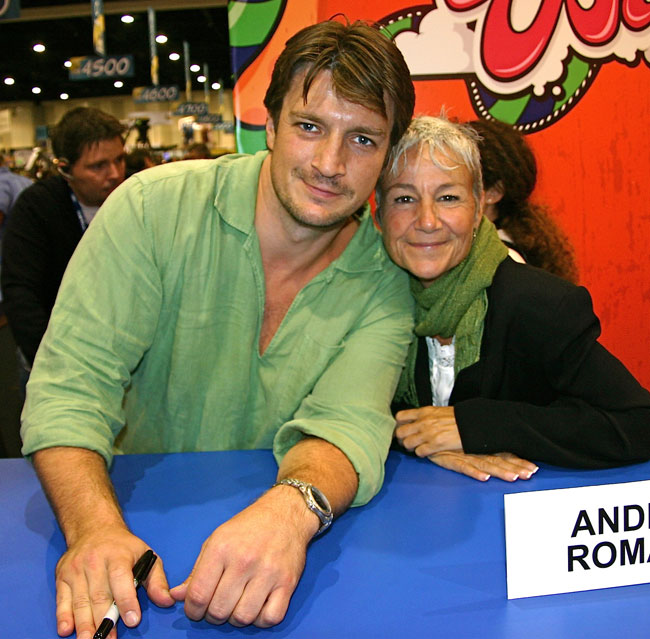 Nathan Fillion, star of Joss Whedonâ€™s â€œFireflyâ€ and â€œSerenity,â€ will do double duty this March as the title character in ABCâ€™s upcoming series â€œCastleâ€ and the voice of Steve Trevor in â€œWonder Woman,â€ the next entry in the popular series of DC Universe animated original PG-13 movies due from Warner Premiere, DC Comics and Warner Bros. Animation on March 3, 2009.

Warner Home Video will distribute the all-new â€œWonder Woman,â€ which will also be available OnDemand and Pay-Per-View as well as available for download day and date, March 3, 2009.

Fillion, a fan favorite for his leading role in Whedonâ€™s space-age western series and film, as well as the online phenomenon â€œDr. Horribleâ€™s Sing-Along Blog,â€ has been featured in a string of primetime series. After his four-season run on â€œTwo Guys, a Girl and a Pizza Place,â€ Fillion did his Whedon tour before heading â€œDriveâ€ for Fox, joining the ensemble of â€œDesperate Housewives,â€ and now assuming the title role in â€œCastle.â€ The latter features Fillion as a hugely popular mystery/horror writer who helps police solve crimes.

Fillion found time away from his upcoming series (â€œCastleâ€ debuts March 9 on ABC) to chat about his tendency to play the anti-hero, an unrelenting Halo addiction, Canadian super heroes, and Keri Russellâ€™s tiara.

QUESTION: Can you describe the challenges of bringing Steve Trevor to life?

NATHAN FILLION: The challenge I find is just trying to use my natural voice and trying not to put on too much of a voice.Â  I tried to just keep it nice and easy and relaxed. Heâ€™s a little bit wry, heâ€™s a little bit dry. I can do that. And a couple of times I actually slipped in a little bit of a southern accent.

Steve Trevor is not a complex guy.Â  Heâ€™s got a faÃ§ade up, heâ€™s got a defense up, but he drops it a little bit because he does care about Diana.Â  I like that heâ€™s got a bit of an arc, heâ€™s got something to learn.Â  I think thatâ€™s what makes a good character and a good story.

QUESTION: Did you have any preconceptions about this role?

NATHAN FILLION: What I know of Steve Trevor is everything that I learned from â€œWonder Woman,â€ the television series with Lynda Carter.Â  And I donâ€™t remember much.Â  I do remember his uniform, though. 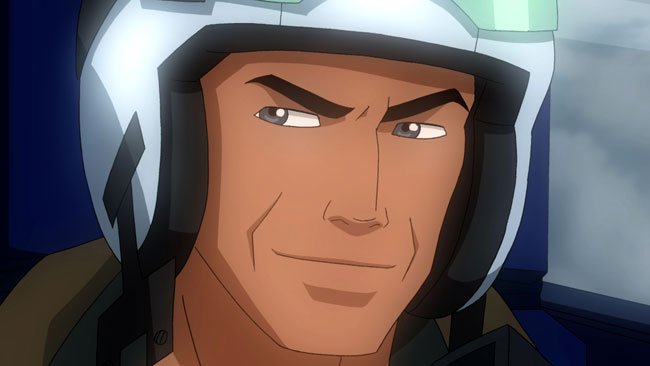 QUESTION: Steve Trevor is not a super hero, but more of a hero by default. Does that kind of fall in line with many of your acting roles?

NATHAN FILLION: I think Iâ€™ve carved out a niche for myself in playing the not-so-hero.Â  Heâ€™s the guy, but heâ€™s not really quite THE guy youâ€™d maybe turn to right away. Steve Trevor is a real guy â€“ heâ€™s very natural, heâ€™s very honest.Â  He doesnâ€™t apologize for much.Â  He seems to be a pretty normal guy, or as normal as a guy hanging out with Wonder Woman can be.

QUESTION: Prior to recording this film, were you familiar with Greek mythology?

NATHAN FILLION: My brain is like a hard drive.Â  Once you start adding new information, you start cutting off old information. About four years ago is when my university art history lessons starting getting deleted for new and more exciting information.Â  Well, I donâ€™t even know if itâ€™s really more exciting.Â  But it sure is new.

QUESTION: Youâ€™ve been involved in a lot of primetime television and feature films in recent years. What prompted you to accept a voiceover role? 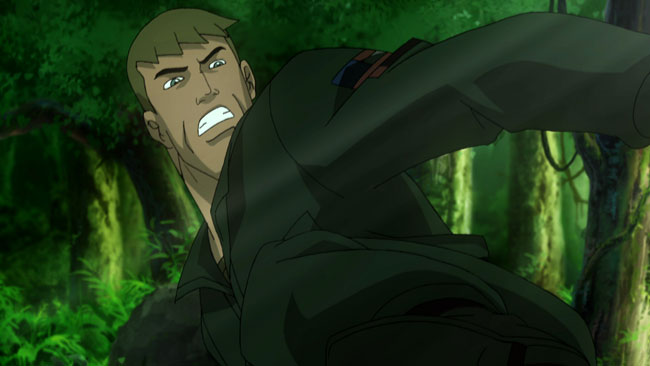 NATHAN FILLION: I find that Iâ€™m in a spot in my career right now where a lot of my jobs come around from people Iâ€™ve worked with already.Â  People keep inviting me back.Â  It’s nice to work with the same people when youâ€™ve had a good time previously, and this is one of those cases. So when you get a phone call saying, â€˜How would you like to be Steve Trevor in the new Wonder Woman animated movie?â€™, you naturally answer â€˜That would be great.â€™ And you smile all day.

QUESTION: Youâ€™re paired with Keri Russell again.Â  What are her strengths for playing â€œWonder Womanâ€?

NATHAN FILLION: Keri Russell is a really wonderful actress and truly a wonderful human being.Â  Itâ€™s excellent working with her. Playing second fiddle to Keri, thatâ€™s a wonderful fiddle to play.Â  Iâ€™ve done it before, Iâ€™ll do it again.Â  As for her strengths as Wonder Woman, well, first of all, she has a jet.Â  Itâ€™s not invisible, but itâ€™s close.Â  And she does wear a tiara.Â  Not all the time â€“ youâ€™re not going to see her walking down the street in it. But sheâ€™s got it.Â  And it looks good. She wears it well.

QUESTION: A decent percentage of your work has been in the sci-fi/fantasy genre. Do you gravitate toward those scripts, or is that just coincidence?

NATHAN FILLION: Good question. I think people imagine that I have about five scripts sitting in front of me and I say, â€˜I think Iâ€™m going to go with the super hero thing and after that Iâ€™ll wrap it up with some more sci-fi and then do a romantic comedy.â€™ But it doesnâ€™t quite work out that way.Â  With scheduling and the way projects come up, I take the first thing that interests me and that moves me.Â  If itâ€™s going to be fun, if Iâ€™m going to have a good time, and Iâ€™m going to enjoy the people Iâ€™m with, then thatâ€™s a good enough reason to do it.

NATHAN FILLION: I was a huge comic book fan as a kid.Â  The only problem I had with comic books is how expensive they got.Â  I didnâ€™t have a lot of money, so I had to be very specific about what I wanted to collect. I think theyâ€™re all somewhere in the basement of my folksâ€™ house. I enjoy the art, and I enjoy drawing. I think my printing to this day looks like the printing right out of a comic book. Actually, I always wanted to be IN a comic book. I watched cartoons when I was a kid, too, and both comics and cartoons lit fire in my imagination.Â  This realm holds a lot of interest for me, a lot of passion for me.Â  So to be comic-ized, yeah, thatâ€™s cool.

QUESTION: So youâ€™re still a geek?

NATHAN FILLION: My mother always tells me, â€˜Nathan, youâ€™re very much a geek, but your strength is that you look mainstream.Â  So no one can tell just by looking at you.â€™Â  I think this is true.Â  I do have a light saber at my front door, but thatâ€™s for home security. In case anything should happen, Iâ€™ll be there. 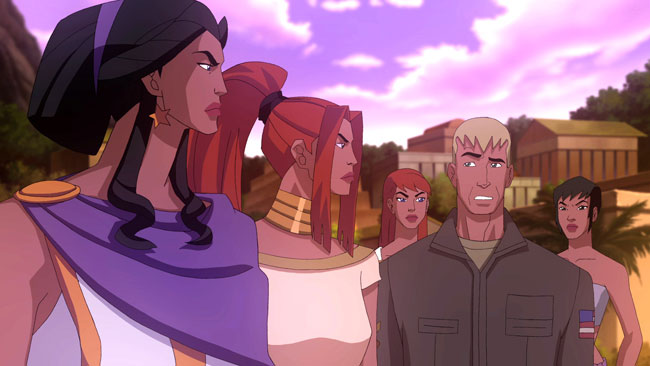 QUESTION: Aside from the light saber, has this cult following in the fanboy realm led to any unusual experiences?

NATHAN FILLION: Iâ€™ve had people dress up like me at Cons and the like. Thatâ€™s always unusual. That the fans have such passion is amazing to me, but you see a guy whoâ€™s dressed out to the â€œTâ€ like you, thatâ€™s kind of cool.Â  Then there was a woman who had created a costume that had a dummy behind her, but the dummy was me. It looked like me, it was as tall as me, it had a tattoo that looked pretty similar to the tattoo I have which you can glean on the (Firefly) DVD â€¦ and he was naked.Â  It was me, naked, carrying her. Honestly, it was kind of flattering, and really well done.Â  Claire, you know what Iâ€™m talking about.

QUESTION: In light of experiences like that, do you ever see yourself suffering the William Shatner â€œget a lifeâ€ syndrome?

NATHAN FILLION: Thatâ€™s a good question. I wonder if in 25 years, Iâ€™ll feel that way.Â  In the meantime, I go to these sci-fi conventions with these people that dress up and I still find it a joy because theyâ€™re passionate about something that Iâ€™m passionate about.Â  Theyâ€™re big fans of something Iâ€™m a big fan of. Iâ€™m a huge fan of the sci-fi stuff Iâ€™ve done.Â  I really thought it was great. I love to watch it.Â  I love being in it and watching other people be in it with me.

QUESTION: If you hadnâ€™t become an actor, what profession would you have chosen?

NATHAN FILLION: My parents being English teachers, they always pushed the writing and the grammar. You know, donâ€™t split your infinitives and watch those double negatives. But I tried my hand at writing, I tried to write out a little script â€“ and itâ€™s not too bad.Â  Mostly, though, it let me understand how incredibly difficult that job is.Â  I canâ€™t even imagine doing it on a weekly basis for a series in any way.Â  Thatâ€™s tough.Â  I think Iâ€™ll try to leave that to smarter people than me.

I always wanted to be an actor, but in Edmonton, Alberta, thatâ€™s not a success-oriented career.Â  So I said, â€˜Iâ€™ll get my (teaching) degree and then Iâ€™ll see what happens, but Iâ€™ll always have that to fall back on.â€™Â  So if anybody were to look at me and say, â€˜Oh, youâ€™re an actor,â€™ I could always say, â€˜Hey man, Iâ€™m a teacher!â€™

NATHAN FILLION: We had a whole handful of super heroes. Wolverine was Canadian.Â  A lot of Americans donâ€™t want to hear that. Youâ€™ve got Guardian, you had Sasquatch.Â  You had those twins.Â  You had Puck, the little guy. I think maybe, if I could be a Canadian super hero, Iâ€™d have some kind of freezing power and some sort of maple syrup weapon.Â  Could be a little sticky.

QUESTION: Are you much of a gamer?

NATHAN FILLION: Iâ€™m a Halo guy. The Bungie folks were kind enough to have me do a voice for Halo 3.Â  So thereâ€™s nothing like sitting down to a nice game of Halo and shooting at myself.Â  I like to get online, and the reason I like it is Iâ€™ve got a lot of friends in Canada and New York, all over Los Angeles and at great distances.Â  Sometimes I take off for months at a time to go work, and my social time is on that box. You put on a little headset and unwind with your friends. You hang out, you laugh, itâ€™s good times.Â  And when itâ€™s all done, you donâ€™t have to send anybody home.Â  No oneâ€™s drunk all your beer.Â  You just say, â€˜Good night, Iâ€™m going to bed,â€™ and itâ€™s off and itâ€™s done.