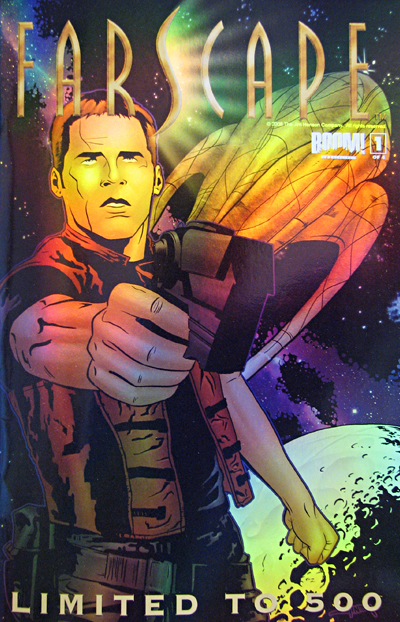 If you are heading to the New York Comic Con (February 6-8, 2009 at the Javits Center in NYC), make sure you swing by the Boom! Studios booth (#1313) to pick up the limited edition of the first Farscape comic book adaptation.Â  The holofoil cover features John Crichton and is limited to 500 copies only.

If you don’t believe this cover is really foil, and really reflective, check out this proof video Boom! Studios’ Chip Mosher sent our way.

How awesome is that?Â  Farscape fangirls are going to line up for this one.

This special limited edition comic is the first of an upcoming series of three special covers that will debut at a select number of comic book conventions across the country at the BOOM! Studios booth.

“When I first heard the term ‘holofoil’ I didn’t know what to think.Â  It’s hard to describe the special metallic effect the books have.Â  But once the issues came into the office, they blew my socks off,” said Chip Mosher, Director of Sales and Marketing.Â  “Fans are going to absolutely love them.”