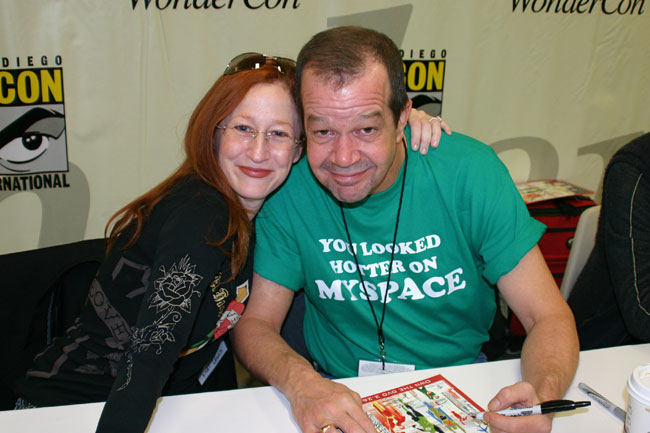 Versatile actress Vicki Lewis makes her second foray into the world of super heroes as Persephone, a key character among the Amazons in â€œWonder Woman,â€ the next entry in the popular series of DC Universe animated original PG-13 movies.

Lewis is best known for her performances in 96 hilarious episodes of NBCâ€™s â€œNewsRadioâ€ as Beth,Â  the sarcastic secretary to Dave Foleyâ€™s lead character. An actress with notable awards and credits on Broadway, Lewis has been featured on numerous primetime sitcoms (â€œHome Improvement,â€ â€œSeinfeld,â€ currently recurring role on â€œ â€˜Til Deathâ€) and hit films (â€œGodzilla,â€ â€œMousehuntâ€).

The star of stage, film, television and animation, Lewis made her DCU film debut in â€œJustice League: The New Frontierâ€ as Iris West, fiancÃ© to the Flash. However, Lewis is no stranger to animation, having had a key role in Disney/Pixarâ€™s â€œFinding Nemoâ€ as well as TV series work on, to name a few, â€œWild Thornberrys,â€ â€œKing of the Hill,â€ â€œRugrats,â€ â€œPhineus and Ferb,â€ â€œBen 10: Alien Forceâ€ and the upcoming â€œPenguins of Madagascar.â€

Lewis found time in her busy schedule to talk about playing the Amazonian â€œbad girl,â€ finding the voice of a character, channeling Velma Kelly, and an addiction to Tetris.

QUESTION: When you read the â€œWonder Womanâ€ script, what was your first impression of Persephone?

VICKI LEWIS: Iâ€™ll be honest, I knew nothing about the mythology of any of this. I got the script, and often times I just kind of look at my part, but this is a fascinating story.Â  I ended up spending half a night on Wikipedia going through the real mythology of the character. Persephone is a very fascinating character in Greek mythology and the comic books. I wasnâ€™t a great student, so I love any opportunity at my age to learn something new. So thatâ€™s how I prepared. 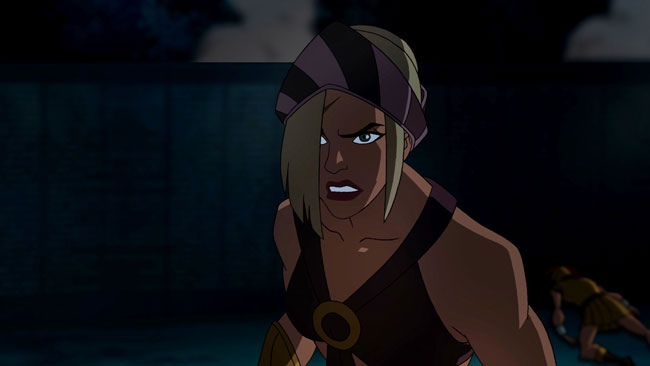 QUESTION: What endeared you to the role of Persephone?

VICKI LEWIS: I do a lot of animation, and mostly I get cast as the whacky character.Â  I play a lot of kids, or the strange neighbor next door, or the really off-the-wall person in the script.Â  But this was really enticing because Persephone is a solid, commanding woman.Â  It was an interesting process to find and place her (vocally) â€“ sheâ€™s a powerful character, and the direction was â€˜less is moreâ€™ in the grand scheme of this Greek tragedy. Iâ€™m very rarely asked to play the powerful, centered part of myself.Â  Itâ€™s always there, but I donâ€™t get to use it often (in performance). I played Velma Kelly in â€œChicago,â€ so I think I drew mainly on that character. But this was a great experience. I expected to come in and they would ask me to act like an idiot, which is what I usually get paid to do.Â  So this was an interesting recording session.

QUESTION: Was there a favorite moment for you during the recording session?

VICKI LEWIS: When you have 900 people staring at you through the glass of the recording booth, and whispering but you canâ€™t hear them, you really want to make sure you give them what they want.Â  And I felt like I got it, because I understood the emotion. This character, Persephone, has some very heartfelt and sad moments, and it was really vulnerable and really human. It wasnâ€™t cartoony â€“ it touched something somewhat real.Â  So I was actually affected by it in a way I didnâ€™t expect to be.

QUESTION: Was it fun playing the bad girl?

VICKI LEWIS: It’s always fun being the bad girl. When I was young, I had Barbie dolls and I made them fly.Â  And then my friends deserted me because I turned them into witches.Â  I was always THAT kid. I didnâ€™t even know what a comic book was.

QUESTION: Much of the fanboy populus is into gaming. Are you a gamer?

VICKI LEWIS: Iâ€™m not into the games like the kids play today, but I was addicted to Tetris. I had the Trio, and the Tetris was on it and then my fiancÃ© got me the iPhone for my birthday and I love it. But it doesnâ€™t have Tetris.Â  So Iâ€™ve kept the Trioâ€™s battery alive to play Tetris. I used to be addicted to Pacman. We were doing â€œThe Wizard of Ozâ€ at the Kansas City Starlight Theatre, so we were stuck in the middle of Kansas and we would go to the House of Pies every night because they had a Pacman machine in their lobby.Â  And we were obsessed with it. 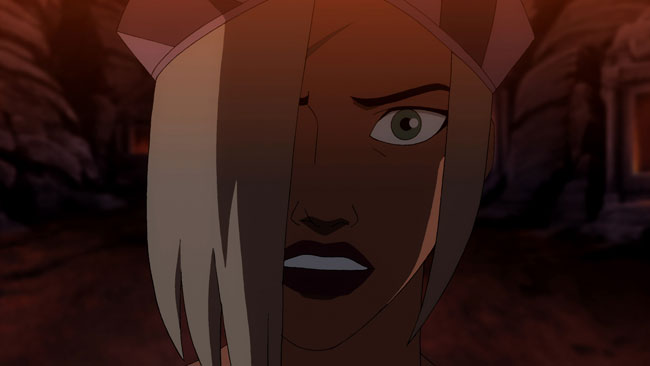 VICKI LEWIS: I started out in theatre in New York and then I did movies and Iâ€™d been out (in Hollywood) for nine months when I got â€œNews Radioâ€ and it was all a really interesting transition.Â  Somebody whoâ€™d been around for a long time came up to me and basically said that the difference between stage and film and television is that on stage the proscenium is where you can see it. Film and television, it’s really got to be here (spreads her arms wide).Â  In terms of turning that into voice work, sometimes the voice is very subtle, and sometimes Iâ€™m so loud they have me move away from the mike. So in voiceovers, you learn where the proscenium is in your voice. As far as acting, Iâ€™ve been working for so long that I can basically tap into any emotion. Iâ€™m like a little trained monkey at this point.Â  So itâ€™s just a matter of finding that place, and adjusting vocally as you would onstage or in film.

For voiceovers, like â€˜Wonder Woman,â€™ I feel really blessed that Iâ€™m able to do this and that Andrea (Romano) continues to hire me. She always lifts my spirits, she always makes me better, and sheâ€™s always so gracious.Â  I keep thinking, â€˜When is she going to see through me, that I donâ€™t have any of this talent sheâ€™s thanking me for?â€™Â  Sheâ€™s just so great, such an amazing director.