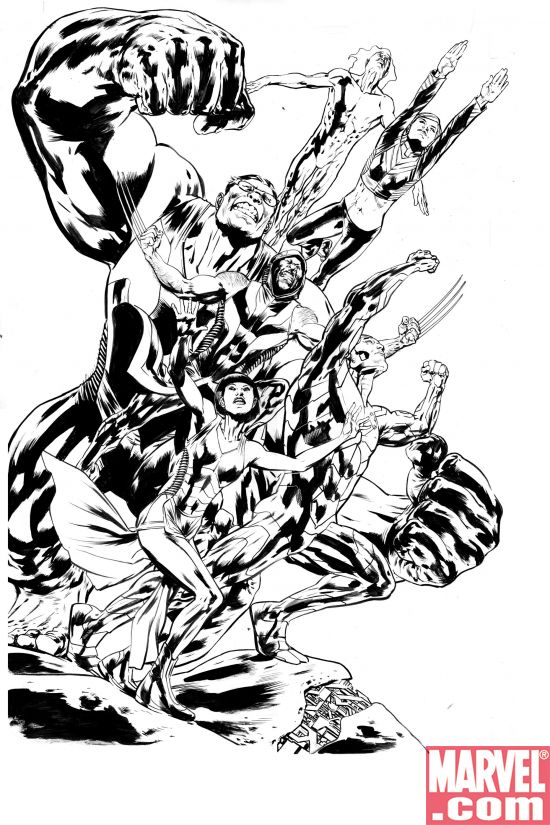 Marvel has announced its newest series, Fantastic Force will debut in April 2009.

In my world, it grew out of fan response.But in the world of [Fantastic Four writer] Mark Millar, he probably knew this was going to spin out all along. Millar is a conniving, wee bastard and he has his ways about these things. Heâ€™s leprechaun tricky.Â  But the reaction to the characters in Fantastic Four was very strong, and the writer, Joe Ahearne, is hitting it out of the park.

In his latest MyCup o’ Joe, Marvel Comics Editor in Chief Joe Quesada, explains the series and even offers up the script for the first few pages.

1/ A devastated future Earth. Multiple rays of ultraviolet light with figures inside streak out into the sky and out of the panel.
CAPTION : They traveled 500 years from the future to escape a dying Earth.
2/ The rays land on the other side of the split panel in one of the recreated cities of Nu-World â€“ contemporary Manhattan.
CAPTION : This is Nu-World. A facsimile of present Earth.
Designed for today’s elite.
3/ The ultraviolet light fades to reveal a crowd of people looking around at Times Square, awed at their new surroundings.
CAPTION : Now home to eight billion refugees.
And the last six heroes in history.
Page Two

1/ Behind the New Defenders we see Sue Richards with Ben and Reed at the dimensional portal to Earth.
SUE RICHARDS : She DID. It’s beautiful. Something to live for.Something worth
DYING for.Ben has his hand on Sue’s shoulder.
THE THING : Hey cut it OUT Suze.Just cause some FUTURE YOU died to
get em here doesn’t have to mean YOU’RE gonna die.It’s just another one of them crazy alternate parallel situations RIGHT
Reed?

Reed’s looking at Sue, not the spectacular vista. Very determined.
REED RICHARDS : Absolutely. Never going to happen.
2/ Ben in the background as Psionics and Johnny kiss.
THE THING : Gimme a BREAK Match head. She’s not CRYSTAL.Plus ya
already SAID goodbye at the FUNERAL.If you can call NECKING at your own sister’s GRAVESIDE which let me tell ya hits a new LOW even fer â€“

PSIONICS : Crystal? Sounds fragile.
JOHNNY STORM : Anything BUT. She’d go ten ROUNDS with YOU.First girl I
LOVED. We were split up by a DIMENSIONAL BARRIER.
PSIONICS : Aw.She break your heart?

3/ Psionics and Johnny part. He flames on.
PSIONICS : You’ll have those NUMBERS when I visit right? I want to check
out that SPIDER guy.
JOHNNY STORM : I’ll give em to your OLD MAN.
LIGHTWAVE : That would be APPRECIATED Johnny.
4/ Close on Sue as they disappear through the dimensional portal back to Earth. Tears in her eyes as she turns back for one last look.Johnny flaming away ahead of her in the background.
SUE RICHARDS : Hope you take care of YOUR planet better than WE did.
5/ The Hooded Man, Lightwave, Psionics, Banner Jr., Natalie X and Alex Ultron stand in front of the dimensional portal as the FF disappear in the energy surge.
BANNER JR. : Count on it.
Reed’s voice tiny and indistinct.
REED RICHARDS : If you need help just holler.
A figure runs towards them.
ALYSSA MOY : WAIT! Stop them! Don’t let them GO!