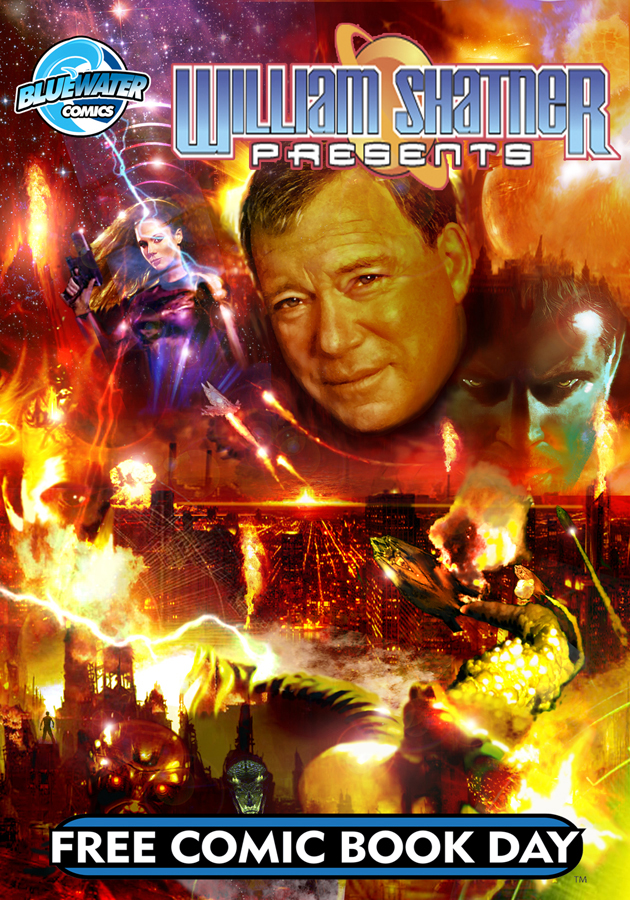 Bluewater Productions has announced it will have a special one-shot collector’s edition of William Shatner Presents in time for Free Comic Book Day.Â  Included in the anthology is an original prologue story from the upcoming Tek War series.

This 12-page prequel takes place 4 years before the initial storyline.Â  The story centers on protagonist Jake Cardiganâ€™s arrest and conviction for murder as well as Tek trafficking.Â  The story alsoÂ  leaves several clues as to important plot points that will happen in the series.Â  We get an insiders look at the Tek War universe and the history behind Jakeâ€™sÂ  troubled past.

I knew William Shatner was the mind behind Tek War, but I did not know Quest for Tomorrow and Man O’ War were also inspired from this acting legend.Â  Stories from those two series will also appear in the FCBD edition.Â  While William Shatner will be producing and editing eachof the series with Craig Nevius, there will be specific writin teams for each series.

The complete breakdown of the issue can be found after the jump.

SYNOPSIS:
Tek War, William Shatnerâ€™s detective noir science fiction novel serves as the foundation of this new comic book series.Â Â  Set in the 22nd century, the storyline will loosely follow the original tale set out in the first novel of the series.Â  Jake Cardigan is a police officer wrongly convicted of a crime and suddenly released from prison to find an enigmatic scientist involved in the drug trade. He does this on behalf of a mysterious benefactor.

Fans of the novel series will recognize many familiar characters and get introduced to a new rouges gallery of players.Â Â  It will be a rollercoaster of plot twists and turns as we get closer and closer to the ultimate secret of the digital drug called Tek.

SYNOPSIS:
This story will work as both a new interpretation of the â€œQuest For Tomorrowâ€ trilogy, and as an extension. It’s not going to be a radical remake such as the new Battlestar Galactica, but more of a back-to-the-basics reinvigoration. The book will feature the character of Jim, who has become a fan favorite. The fast-paced, action-oriented plot is steeped in matters of family and identity, and will focus on issues social relevance tackling the demonization of youth.

SYNOPSIS:
In the near future, the population of the Earth has lumbered past the ten billion mark. Most of the planet’s natural resources are dwindling or gone. The only thing keeping the ever-increasing masses of Earth alive are the vast food vats of Mars and the mining operations of the asteroid belts. But, the promised rewards for those who thirty years previous went to the stars to save humanity have never materialized. Instead of a new world to homestead, the colonists have been turned into virtual slaves by Red Planet, Inc., the corporation granted the charter to develop Mars.

Now, cheated, lied to, with no hope in sight, the Martian colony has begun to boil with talk of strikes and revolution. A stop in production would mean riots and chaos on Earth, billions dead in a matter of weeks. It would mean war, plague and famine at levels never before known. Into this most explosive political situation is thrust Benton Hawkes, the most trusted diplomatic negotiator alive. All sides agree, he the only man to be trusted to avert a catastrophe which could bring destruction to the entire solar system.

But, bitter reasons of his own, Hawkes wants nothing to do with Mars. And, on top of that, there are those who don’t want to see the situation calmed, and who will do nothing to stop Hawkes from interfering with their plans.

COMICS PORTAL: Been A While, Free Comic Book Day!