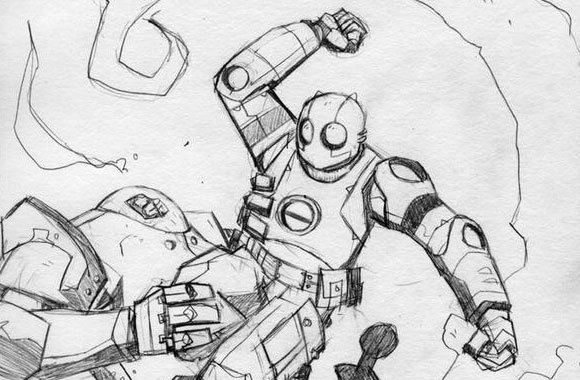 Probably the best first week news of 2009 – Brian Clevinger and Scott Wegener are working on getting the third and fourth volumes of Atomic Robo in our greasy little hands this year.

Beyond that weâ€™ve got Volume 3, Atomic Robo and the Shadow From Beyond Time coming up for pre-order inâ€¦uhâ€¦weeks? Months? Not 100% on that one. Itâ€™s soon though, I promise you that! And, yes, weâ€™re doing another story for Free Comic Book Day this year. Look for that at your local retailers in May.

Thereâ€™s a lot I want to say about Volume 3, but none of it makes sense without context. So, for now, Iâ€™ll just say itâ€™s another five part series. Scottâ€™s finished the first issue and Iâ€™m currently writing the fourth wherein we bring back our favorite guest star from Volume 1. Weâ€™re taking things in yet another direction with this volume. Oh, donâ€™t worry, all the sci-fi adventure comedy of Atomic Robo is there. We just take it down a new path this time. Hell, youâ€™ll see!

Favorite guest star?Â  Stephen Hawking is back?Â  Or would it be Einstein?Â  Either way, I loved the dynamics between the two “villains” and Atomic Robo.

Looking way beyond the horizon here, we originally intended for Volume 4 to be Atomic Robo and the Flying She-Devils of the Pacific. Kind of our ode to the ridiculous scientific excesses of the post-WW2 military industrial complex of the â€™50s. With Communism on the rise and the three-way aerial collision between prop planes, jets, and atomics, it was a crazy timeâ€¦and there were air pirates.

But then Scott hit me with this great idea for a modern story thatâ€™d push the She-Devils back to Volume 5. The only problem? I canâ€™t think of a good pulpy title for it! Ah well. Either way, we should have a fourth volume for you guys later this year as well. Depending on how the timing works out, and how many issues the fourth volume has, 2009 may actually see two full Atomic Robo mini-series. Historic!

How about Atomic Robo and the Invaders from Mars?