By Stephen Schleicher on January 1, 2009 2 Comments 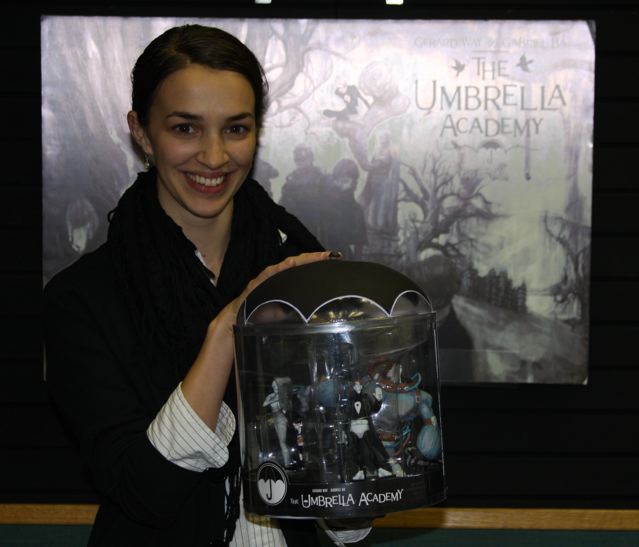 Gerard Way has managed to make quite a name for himself in the comics industry over the past yearâ€”racking up an Eisner for Best Limited Series, and a Harvey for Best New Series, for his breakthrough miniseries The Umbrella Academy: Apocalypse Suite.Â  In tandem with series artist, multiple-Eisner winner Gabriel BÃ¡, Way has created a bizarre world which defies the space-time continuum, and pits a dysfunctional family of super-powered siblings against animated monuments, talking chimpanzees, a secret society of robot assassins, and each other.

Right on the heels of the first issue of Way/BÃ¡â€™s highly anticipated follow-up series, The Umbrella Academy: Dallas, Dark Horse Deluxe is proud to announce the release of a new figure set depicting the six members of The Umbrella Academy introduced in Apocalypse Suite, as well as a book-and-figure set that includes a hardcover edition of the first collected graphic novel and a 4-inch figure of Vanya, AKA The White Violin, the shunned UA sibling with the sinister set of strings!

The Umbrella Academy Book and Figure Set features a previously unused cover by Gabriel BÃ¡ for the special digest-sized hardcover. The included 4-inch figure depicts Vanya as The White Violin, poised to end the world in concert with The Conductor and his evil Orchestra Verdammten!Â  It is scheduled for release in April 2009 at a suggested retail price of $24.99. 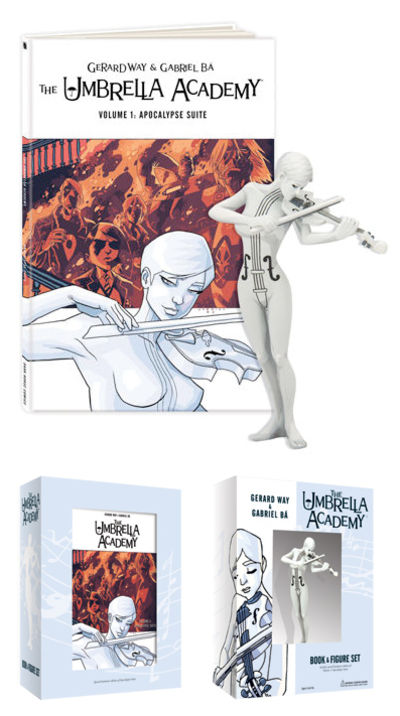 The Umbrella Academy Figure Set features the six members of the Academy, sized to scale, with Spaceboy measuring a beastly 5-inches as the largest figure in the set, and The Boy stacking up at a small-but-substantial 2-inches. The Dark Horse Product Development team worked closely with Way and BÃ¡, adding bold shadowing and strange angles to create uncanny likenesses that evoke the characters exactly as they appear in the comic.Â  The final product is as unique and quirky as the story itself, encasing the six siblings in cylindrical 360-degree packaging that displays the team under an umbrella-shaped dome.Â  See these superheroes in all of their splendor when they hit retail stores in May 2009, with a suggested price of $39.99. 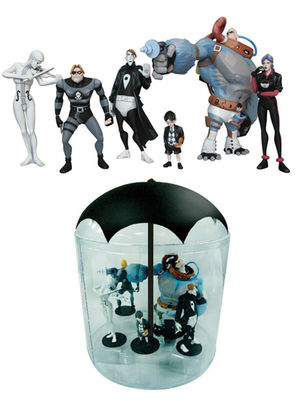 â€œIn my six years at Dark Horse, I have never experienced this much cooperation and inspired creativity on a project,â€ says Rebecca Dâ€™Madeiros, Senior Product Development Manager for Dark Horse Comics. â€œGerard and Gabriel, the team here at Dark Horse, and the manufacturers have contributed a wealth of ideas for the figures and the unique packaging. Itâ€™s been great fun along the way. We are all proud of the outcome: a 6-piece figure set worth displaying on a revolving shelf with spotlights and soundtrack music!â€