Writer Michael Jelenic makes the leap from animated television to feature-length films with his script for “Wonder Woman,” the next entry in the popular series of DC Universe animated original PG-13 films. Warner Premiere, DC Comics and Warner Bros. Animation are set to release the all-new film on March 3, 2009, distributed by Warner Home Video. The film will also be available OnDemand and Pay-Per-View as well as available for download day and date, March 3, 2009.

Jelenic has crafted a script that offers complementary balances of action and comedy, contemporary society and Greek mythology, and the social pratfalls of both men and women. It is an origin story and a stand-alone adventure, resulting in an entertaining approach to the first-ever “Wonder Woman” full-length film. Jelenic and renowned comics writer Gail Simone have “story by” credits on the movie.

Jelenic is well-known for his work at Warner Bros. Animation, providing the clever words to series like “The Batman,” “Legion of Super Heroes” and the newest Dark Knight animated series, “Batman: The Brave and the Bold.”

Jelenic stepped away from his laptop to be both brave and bold in answering a few questions about the thoughts behind the words and story of “Wonder Woman,” the challenges of pleasing every fan, and the un-coolness of working in the comics realm.

Before you make your New Year’s resolutions, check out this Q&A with “Wonder Woman” screenwriter Michael Jelenic â€¦

QUESTION: As this is Wonder Woman’s origin story, what did you know you needed to include and on what did you want to focus?

MICHAEL JELENIC: We had to hit certain elements that are part of Wonder Woman’s myth, and my job was to answer what sort of ramifications her origins would have on her character during her journey to becoming a hero. It’s basically trying to boil down essential Wonder Woman elements into one story. We looked at the stuff that the fans had to see â€“ the iconic things about Wonder Woman â€“ and then tried to put a twist on them. We’ve seen the lasso and the invisible jet before, so what’s another way we could use them? I wanted to incorporate all these iconic Wonder Woman moments into the larger overall story. 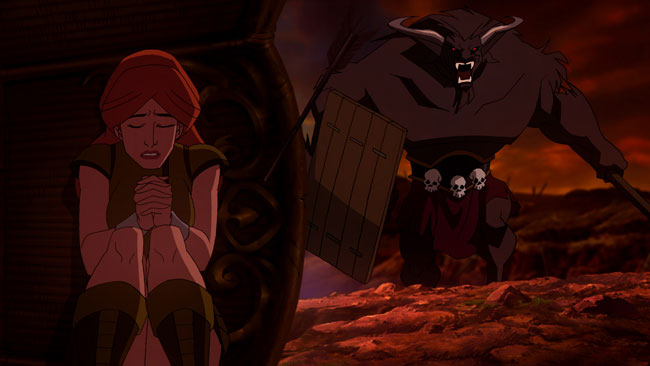 MICHAEL JELENIC: First, I figure out what’s the story that’s worth telling, and that usually entails a long time of just staring at the blank page. Once I know that story, I start focusing on the moments. I think when you remember great films, it’s not necessarily the plot that you remember, it’s the moments. So I start trying to accumulate a list of moments. In “Wonder Woman,” there are a lot of them â€“ the bar scene between Diana and Steve, the interrogation of Steve, the truth lasso. It’s taking all the elements and moments and, while working within the theme of the story, creating something that serves those ideas.

I also researched a lot Greek mythology to help form the screenplay. I definitely wanted to hit some of the hallmarks of Greek tragedies, so I had to brush up on Ares and Hades, Hera and Zeus, and tons of characters I can’t even pronounce.

QUESTION: What went into the character development of this Diana/Wonder Woman?

MICHAEL JELENIC: Diana had to represent all the feminine ideals and virtues, the things that make women great. At the same time, she’s a very strong female character in terms of both her physical prowess and her personality. So we tried to find a balance to create a character that doesn’t lose her femininity by being a strong action hero.

Ultimately, we wanted to explore her journey of discovery. She’s been raised to believe that women don’t need men, that women are morally better. If there is a message to the film, it’s basically that men and women are not perfect. Men have their problems. Women have their problems. And when they interact, these problems often grow. But at the end of the day, men and women are actually stronger and better when they work together to overcome these problems. 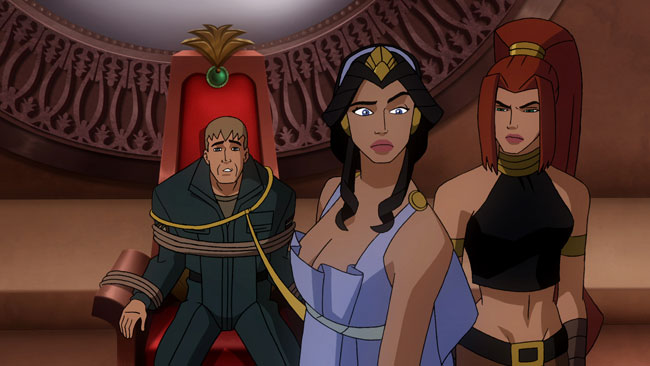 QUESTION: How did you balance Wonder Woman’s personality with those of your two primary male characters, Ares and Steve Trevor?

MICHAEL JELENIC: The stronger you make your villain, the stronger it makes your hero, so we wanted Ares to be intelligent, ruthless, powerful, and also represent all the misgivings the Amazon women have about men. When Hippolyta says men are bad, she points to Ares.

Steve Trevor was a difficult character to crack in that, as a love interest to Wonder Woman, it’s important that you make him somebody who is worthy of Diana’s affection. So he had to be strong and competent, but at the same time in order to create the romantic comedy, he can’t be perfect. And he is flawed. He has his own sort of misogynistic ideas that he has to resolve. But he proves himself worthy.

QUESTION: What made “Wonder Woman” entertaining for you to write?

MICHAEL JELENIC: I really enjoyed an opportunity to tell a story that is sort of a romantic comedy mixed with “300.” That’s what Wonder Woman really is â€“ a very simple sort of love story that’s frequently comedic, primarily in the pairing of these two key characters, set against a backdrop of so much violence and action.

QUESTION: Did you have a favorite character?

MICHAEL JELENIC: Steve Trevor’s probably my most favorite character to write because he’s the comedy relief throughout the film. He doesn’t take himself too seriously. You have all this pretentious Greek god stuff happening, and then you give him a line where he sort of disarms that or diffuses it with a joke. 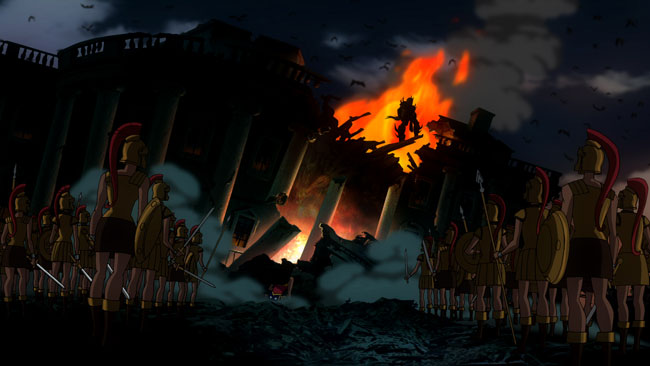 QUESTION: Did the cast add anything to your words?

MICHAEL JELENIC: I think we were incredibly fortunate to get this amazing cast. I thought the lines I’d written were pretty good, but these actors really make them their own. Steve Trevor’s lines looked funny on the page, but they are hilarious coming out of Nathan Fillion’s mouth. And Keri Russell brings a sense of compassion and depth to her character that goes beyond what was even intended in the script.

QUESTION: Did Lauren Montgomery’s direction translate your visions of the script?

MICHAEL JELENIC: Better. Lauren’s direction is amazing. I wrote some battle scenes in the script, but the way she fleshed them out is so much better than I could have ever conceived. At the same time, her approach to directing the characters is very strong. I enjoy watching the scenes between Steve and Diana just as much as the battle scenes.

QUESTION: Do you enjoy working in the comics realm?

MICHAEL JELENIC: I enjoy working in the world of comics, but there are definitely some challenges. It’s hard to keep every single fan happy with what you do â€“ that’s probably the biggest and most daunting challenge. You want to bring your own take to the character, but at the same time, you don’t want to betray what people feel are the core ideas of the character. Regardless of what you do, there’s going to be someone who says you suck. But if you do a decent enough job, a lot of people will tend to appreciate you putting a different spin on the subject. It’s actually a great time to work with comics â€“ but it’s like the opposite of cool to work in comics. It’s fun to be able to spend your day coming up with stories for men in tights. So it’s not cool, but it’s fun. (he laughs).