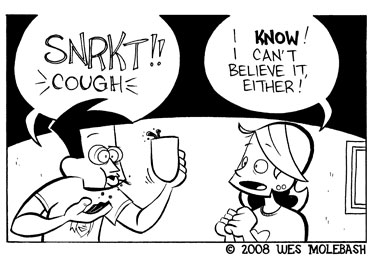 This is pretty sad news for fans of the You’ll Have That web comic by Wes Molebash.

Iâ€™ve been struggling with a way to present this bit of news eloquently, so Iâ€™m just gonna lay it all out there in one big pile:

This decision was not an easy one, and Iâ€™ve spent a lot of time thinking about it and talking it over with my friends and family.Â  2008 has been a difficult year for me personally, and I believe that now is as a good a time as any to end one project and start working on the next.

The announcement was made last month, and I’ve been holding off publishing the news until I could set up an interview with Wes.Â  Tonight he and I will have a chat about the ending of the series, and the start of something new.Â  You’ll be able to hear the entire piece on the next Major Spoilers Podcast.