Image Comics has sent Major Spoilers the cover images and solicitation information for titles arriving in March 2009.Â  Among the list of items to check out includes the awesome four panel cover to Invincible #60, and Madman Atomic Comics featuring artwork by Darwyn Cooke.

Hell has invaded Earth, and only one man can stop it… junior account executive Dave Sloan, aka the Killer of Demons! Â With an angel at his side, Dave can see the demons that have infiltrated our world… and they all have to die! Â But these ‘demons’ are mostly Dave’s co-workers at the office or people that annoy Dave in some way, leading him to believe that he’s gone totally insane. Â Or has he? Â Now Dave must fight to survive and find out the truth… is he a whacked out mass murderer, or the last hope the world has against the forces of Hell?

In the fall of 1876, three months after the murder of Wild Bill Hickock, another legend rode into Deadwood, South Dakota.

The dime novels said he was fast with a six-gun and faster with the ladies–said heâ€™d killed more men than he could count. They called him the FREEDOM KID.

Sometimes, the pen is indeed mightier than the swordâ€¦

â€¦and a LEGEND is a hard thing to live up to.

A battle of epic proportion ensues in an ancient time.Â  Since the death of his mother Lilith, Odin, first son of Adam and Lilith, vows to continue to punish Eveâ€™s children as his mother desired.Â  The second child of Lilith, known as Loki, has had enough of his sibling Odinâ€™s grasp upon the children of Eve.Â  After witnessing their death at his hands, Loki crawls deep into the ocean depthsâ€¦and time passes.Â  Many years later, Loki awakens to a modern world, where he meets and falls for an ER doctor named Bridgette.Â  Their happiness is short lived, as Loki realizes that his siblings are still very much alive and wrecking havoc upon the children of Eve once again!

THE CROSSOVER EVENT OF THE DECADE!
Invincible is drawn into a company-wide crossover event done in ONE oversized issue!Â  SPAWN! SAVAGE DRAGON! YOUNGBLOOD! SHADOWHAWK! CYBERFORCE! PITT! ULTRA! and many, many more all here for one issue â€“ donâ€™t miss it!

Filled with never-before-seen artwork by MICHAEL AVON OEMING from all phases of the development of the acclaimed anthropomorphic series. And featuring an all-new short story that bridges the gap between series volumes one and two: following Karic’s ceremony, knighting the young mouse as a true Templar, Cassius is instructed to take the boy and flee into the wilderness before competing factions can exploit him. But Cassius’s mission may be doomed from the very start as a tree filled with Templar Priests stands between him and freedom. Is Karic and the prophecy he fulfills worth the cost in lives and shed blood?

The Harvey Award-winning graphic mixtape returns for a third round with a new generation of cartoonists teaming up with some of the industry’s most celebrated namesÂ  to produce nearly five hundred pages of all-new, full color comics! Always exciting, unpredictable, and bursting at the seams with unhindered creativity, POPGUN keeps getting better and better!

When a threat from another dimention threatens to destroy the world, BRIT must team up with all the heroes of the INVINCIBLE UNIVERSE to stop it.Â  Guest starring Invincible, The Astounding Wolf-Man, Tech Jacket and many, MANY more!

What if they threw an Apocalypse and nobody came? The end times are upon us, but to be honest, Heaven and Hell have lost all enthusiasm for anything resembling a Final Judgment. Earthâ€™s guardian angel, in an act of cosmic negligence, selects Golly Munhollen, part time race car driver, part time carny, and full time dumb ass to become humanityâ€™s defender against the remaining elements of Hell still bent on starting some trouble come Judgment Day. By day Golly repairs rides on the midway, by night he stumbles ass backwards into the weird menaces that seem to pop up in every town on the carnivalâ€™s tour. Golly is aided in his quest by his carny pals: Vaughn, the 6â€™6â€ tattooed man; Pig, former freak show fat lady turned strong woman; Miguel, the genius dog-faced boy acrobat; and Satan, former monarch of Hell now down on his luck and working the midway for cigarette money. Catching Hell collects the first five issues of the critically acclaimed, groundbreaking Image series including the tale of Gollyâ€™s origin and his subsequent hapless encounters with a preacher-turned-werehog and a trailer park stalking vampire. Itâ€™s southern fried horror fat packed with high octane adventure and low brow humor.

The deadly battle continues. Just about everybody fights just about everybody else. Paris vs. Menelaus, Great Ajax vs. Hektor, and Odysseus beats on Thersites. From the walls of Troy, Helen and the Trojan women watch a showdown between Achilles and Hektor.

After being shot in the back, Amberâ€™s mercenary problems multiply as she struggles to understand why her family was attacked for a mysterious key.Â  Help comes in the form of Galactic Guardian, Ace Armstrong.Â  Outgunned, Ace retreats with Amber offworld against Amberâ€™s wishes to save her family.Â  However, a confrontation ensues when they are tracked down for the key and Amber is faced with the death of an Atomsâ€™ family member.

Incarcerated!Â  Is this the end for Gary Hampton, The Astounding Wolf-Man?Â  No, dear readers–this is only the beginning!

BAD DOG #2
story JOE KELLY
art & cover DIEGO GRECO
Even werewolves get the blues! Further “adventures in bad taste” abound as Lou ponders the value of his life while Wendell tries to snap him out of his furry funk…by throwing him in front of a heavily armed militia! You like swearin’? You like drinkin’? You like shootin?! You LOVE Bad Dog!

Visionary’s going on his first date! And it’s with that cute Firebird, too. But you know what happens when two super-heroes try to take a night off, don’t you…? The answer may surprise you!

â€œMONSTER ON THE LOOSEâ€
Freed from his lonely prison cell, the Elephantman known as Tusk wanders aimlessly along the dark avenues and alleyways of Mystery City… until he is taken into the care of another lost soul, and then his problems truly begin…

Golly Munhollen and his misfit carny pals stumble into another backwater brouhaha in The Siren of Soaptown. A curse born of unquenched vengeance keeps the isolated denizens of Soaptown in perpetual terror unless Golly can unlock the secret of the hex. Special guest artist Tony Fleecs. Mature readers.

Holiday shopping takes a turn for the worse when the Gods choose the Cherry Hill Mall as their battleground.Â  The evil Minog wants Barockâ€™s head on a slab and heâ€™s willing to kill any mall rat that gets in the way.Â  Unfortunately for Zoe, the mall is also the location of her most recent break-up.Â  And now sheâ€™s caught in Minogâ€™s cross-hairs.Â  With Barockâ€™s power failing miserably, will he be able to muster the strength to save himself and Zoe from certain death?

They’re the Single Club’s DJ ogres: Seth Bingo and the Silent Girl. But do sensitive hearts beat within shallow breasts? Hell, no. Join us for a story of sarcasm, extreme sarcasm and solipsistic snobbishness. Remember: they’re laughing at you. You may as well laugh at them. PLUS two back-up stories showcasing the dazzling art of DAVID LAFUENTE (Hellcat) and CHARITY LARRISON (Busted Wonder).

â€œJULIA,â€ Part One
SASQUATCH AND STEAMPUNK! Proofâ€™s a young man in 1860 London.Â  Springhel Jack is murdering prostitutes and he may be hiding out in the circus sideshow where Proof is a featured attraction.Â  But Proofâ€™s mind is on something else: the beautiful â€œBaboon Lady,â€ Julia.

The Dragon is out to shut down Chicago’s notorious criminal organization the Vicious Circle and that means breaking up speakeasies, bookie joints, gambling houses, fight clubs, nightclubs, distilleries, breweriesÂ and brothels. The Dragon is back on the force! Criminals beware!

The deal is struck! Acclaimed Vertigo writer STEVEN T. SEAGLE (American Virgin) and animator MARCO CINELLO deliver the second chapter in the weirdest story of Lili Bloomâ€™s young life. Paying down a demonic barter for the betrayed soul of her damned boyfriend, Lili discovers she has some issues using her sexuality as a Venus flytrap for a few bad men.

But if holding back on her urges will only guarantee the eternal damnation of her one true love, whatâ€™s a girl to do? Battle the Prince of Lies with some underhanded gamesmanship, of course. Who will emerge victorious: the ultimate force of vengeanceâ€¦or the devil who ticked her off?

Thereâ€™s Hell to Payâ€¦
And The Devil Doesnâ€™t Do Credit.

Jim Downing awoke from a long coma to discover he has no memories of his past life, and worse, he seems to be possessed by a dark, violent power that emerges in times of stress. As Jim struggles to piece together the events that led him to this fate, he finds himself at the middle of a great conspiracy, stalked by agents of both Heaven and Hell. Help is offered from surprising quarters, but can anyone truly be trusted? Brought to you by the all-star team of TODD McFARLANE, WHILCE PORTACIO and BRIAN HOLGUIN. 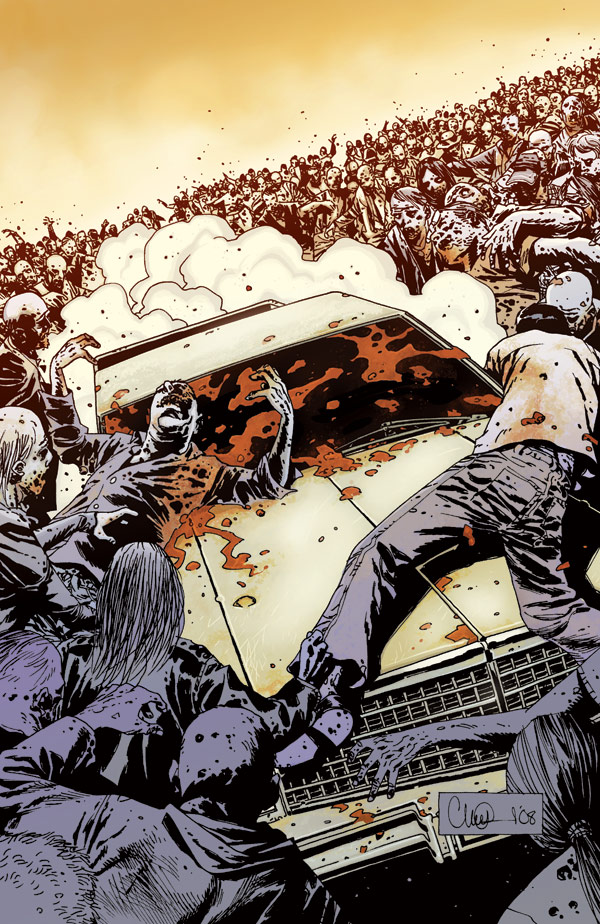