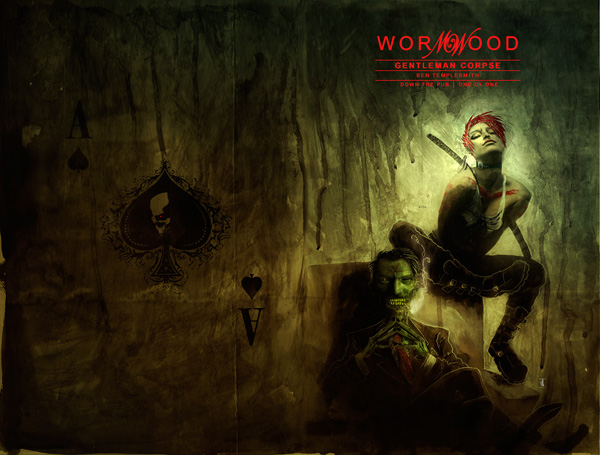 In December, IDW Publishing introduces another comic in the Wormwood seriesâ€”Wormwood, Gentleman Corpse: Down the Pub, One-Shot. Templesmith introduces two little-known tales from Wormwoodâ€™s past previously unpublished in comic book format, as well as an all-new story.Â  The book features 29 pages of beer-stained art and story.

Since its release in mid-2008, the Wormwood series has built a huge fan following and received some glowing reviews:

â€œWormwood succeeds on just about every level. Visually, Templesmithâ€™s art style is at its best here, with pitch-perfect color, some truly beautiful hand drawings and clear storytelling that still manages to maintain mood quite effectively. In terms of dialogue, the book provides plenty of quotable lines on just about every page, and just as many memorable moments.â€ (Comicpants.com)

According to Templesmith, “Down the Pub is a stand alone one-shot book that deals with the first ever Wormwood short stories I came up with, as well as a longer length new one, meaning the issue clocks in at basically 29 pages, unlike the usual 22-page nonsense! I hope this’ll keep fans happy until new Gentleman Corpse plans are hatched next year. Also, no humans were actually harmed in the making of this comicâ€¦ honest.” he said.

And, if that werenâ€™t enough of ye olde Wormood, in January fans will be able to emulate their favorite Gentleman Corpse with an all-new set of 4 Wormwood pint glasses. Each 16-oz. glass features a brand-new image by Wormwood creator Templesmith, packed in a display box that also displays all-new art by the creator. Bowl of pretzels not included. The Wormwood, Gentleman Corpse Pint Glasses will retail for $19.99, and are available for order through Diamond Distributors.