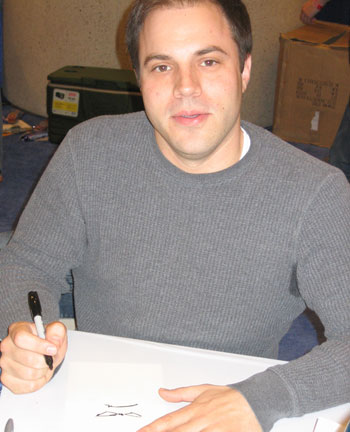 Geoff Johns made it official with his announcement that he is leaving Justice Society of America after issue #26.

The JSA to me represents everything good about life, work and superheroes. In life, generations past, present and future all provide different viewpoints. There can be something magical when itÂ’s past from grandfather to father to son or from mother to daughter or son to grandfather. ThereÂ’s nothing more important than family Â– and family means a lot more than just blood relatives. ThatÂ’s what my very first book, STARS & S.T.R.I.P.E., was about and thatÂ’s what JSA, and life, is about.

So why am I leaving?

I have more stories to tell, and the characters are endless, but thatÂ’s also true for the DC Universe. IÂ’m ready to move on to some other challenges like returning to THE FLASH and SUPERMAN: SECRET ORIGIN. And I am also obsessed with making sure that GREEN LANTERN, BLACKEST NIGHT and everything around it is the absolute best it can possibly be. Â…and thatÂ’s only part of 2009. There are some new projects on the horizon.

Geoff is doing a heck of a lot of work in the DCU right now – it’s almost like you can’t pick up a DC title without seeing his name on the cover.Â  With the hype building for Blackest Night, it’s probably a good idea that Johns pulls back and focuses on the core titles.Â  The Thy Kingdom Come storyline has been okay, but it’s also dragged on for some time, so maybe it is time for a rest.Â  Besides, he didn’t say he wouldn’t ever write JSA again, so there is always a chance for return.

via The Comic Bloc Forums