Angora Napkin Gets Print and TV Series in 2009 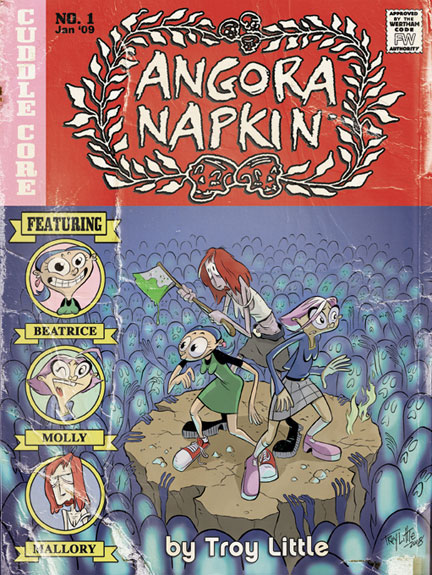 Angora Napkin is an adult comedy about a pop music trio of girls who constantly find themselves mired in the horrible and confronted with the macabre.Â Â  Unable to recognize the dark side of any situation, they always seem to come out on top (with the help of their impromptu peppy songs).

The book is written and drawn by Angora Napkin co-creator Troy Little as a break between volumes of his noir drama graphic novel Chiaroscuro, also published by IDW.Â  A Limited Edition Preview comic was sent to retailers in August through Diamond and was also handed out at the IDW booth at last years San Diego Comic Con and SPX show in Washington.

TELETOON, in a Canada wide search for new and original adult animation ideas, selected Angora Napkin to be developed as an animated pilot. â€œThe idea of Angora Napkin was originally developed by Nick Cross and me as an animated series so itâ€™s really interesting to see the project come full circleâ€ says Little.Â  â€œWeâ€™ve teamed up with Mugisha Enterprises to produce the cartoon.Â  Both Nick and I are putting many hours into the cartoon and are involved in all aspects of production to ensure the unique look of the show remains fresh and creator drivenâ€.

Troy believes the timing of the book and cartoon will do much to compliment one another and help draw attention to the product. â€œAngora Napkin is one of those quirky little concepts that could potentially draw a cult status. Itâ€™s very subversive humor coupled with a healthy dose of sex and violenceâ€.