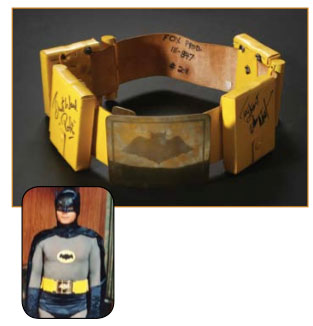 I think there are a half dozen things on at this auction I’m interested in putting on my Christmas list.Â  The utility belt worn by Adam West in the 1960s Batman television series is only going for between $4,000 and $6,000, the outfits worn in the Buckaroo Banzai movie are only $3,000 each, and the cowl that Christian Bale wore in Batman Begins is a bargain at $20,000.Â  Too bad that Major Spoilers Tip Jar is empty (joke).Â  This is the 33rd Annual Profiles in History Auction that kicks off on December 11.

Take the jump for the complete press release.

Mark Hamill’s hero “Luke Skywalker” lightsaber from Star Wars and Star Wars: The Empire Strikes Back ($150,000-$180,000), the original 82-inch diameter hero “United Planets Cruiser C-57D” flying saucer filming miniature from Forbidden Planet ($80,000-$120,000); three volume presentation First Editions of The Lord of the Rings with Elvish inscription with all three volumes signed by J.R.R. Tolkien ($80,000-$120,000), Harrison Ford’s “Indiana Jones” hero machete from Indiana Jones and the Temple of Doom ($80,000-$100,000) and a First British Edition of You Only Live Twice inscribed by Ian Fleming to the real James Bond ($60,000-$80,000) highlight just some of the 500+ iconic pieces of Hollywood history that Profiles in History (www.profilesinhistory.com), the number one company in the world for authentic Hollywood memorabilia, will offer in their 33rd Hollywood auction, which will be held December 11, 2008. Worldwide bidding begins at 12:00pm (PST). Bids can be placed either in person, via mail, phone, fax or live on the Internet via eBay Live Auctions (www.ebayliveauctions.com) or (www.LiveAuctioneers.com). What better place to find a gift for the film or TV fan that has everything-or thought that they did!

A full-sized animatronic “Joe” from Mighty Joe Young, expected to sell for $80,000-$120,000 is one of 42 lots comprised of the spectacular work of six-time Academy Award winner Rick Baker will also be included in the auction. A signed letter of authenticity by Baker’s Cinovation Studios accompanies all of these pieces. The consignor will be donating a portion of the proceeds from the sale of each piece to the Motion Picture Relief Fund and Country Home in Woodland Hills, CA.

“I find people buy their memories,” says Joe Maddalena, owner of Profiles in History, the nation’s leading dealer of guaranteed-authentic original historical autographs and vintage Hollywood memorabilia. “It’s all about memories, taking us back to a time, perhaps an event with a long lost relative who took you as a kid to see Star Wars. The baby boomers have come into the spending part of their lives. They have had success and are collecting their childhood. They want 50s, 60s and 70s TV collectibles or memorabilia, as this era of TV was such a huge part of their lives.”