Or – “Happy Thanksgiving From Planet Gallifrey!” 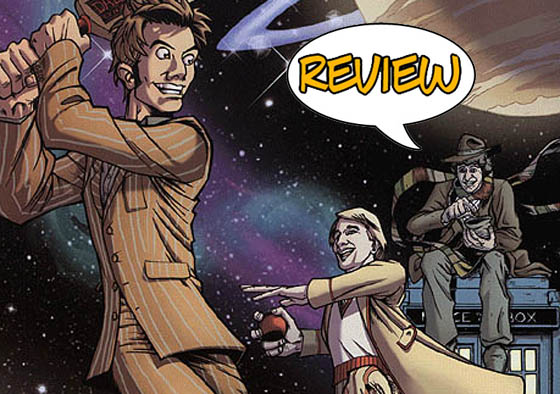 Here’s the issue I’ve been waiting for, folks, with my favorite and least-favorite Doctors both in full effect.Â  I think I’ve referenced my love of the Fifth Doctor before (notably in the most recent Major Spoilers Podcast) and it’s a tenet of Doctor Who fandom that the first Doctor you encounter tends to be your favorite.Â  David Tennant and I agree that Peter Davison’s rendition of the character is number one, but will this issue live up to my childhood memories?Â

Previously, on Doctor Who – The Forgotten:Â  The Tenth Doctor and Martha Jones have landed in a mysterious museum devoted to the history of the Doctor himself.Â  The last son of Gallifrey finds most of his memories erased, and is chased through the exhibits by old foes sent out by a mysterious man in the shadows who looks like Anthony Ainley’s version of The Master.Â  By focusing his mental energies on various items that represent his past selves (a walking stick for the first Doctor, the ubiquitous recorder of the second, the keys that the Third Doctor used to drive Bessie) The Doctor regains bits and pieces of his life, including residual characterizations of the last self he re-integrates.Â  Reverse-engineering from the Tardis key found on his old keyring, the Tenth Doctor sends out a homing beacon to the Tardis, only to find no signal returning.Â  “If the TARDIS key can’t find the TARDIS anywhere in time and p space…Â  THAT MEANS THE TARDIS NO LONGER EXISTS!”Â  Dun dun daaaaaaah!

The first thing that I noticed in this issue was the absence of artist Pia Guerra, as this issue was drawn by Stefano Martino.Â  His Doctor is pretty satisfactory, but I find his Martha doesn’t capture Freema Agyeman’s face, and gives her a lot more… um…Â  curves than I remember on the real actress.Â  Still, any discomfort I feel is quickly subsumed in the plot, as the Doctor laments the fact that his ship is gone.Â  He realizes that there must be an option, but running on three lifetimes of experience doesn’t give him enough to work with.Â  Martha pulls a plastic bag full of jelly babies out of her knapsack and he flashes back to his Fourth incarnation, the one with the scarf.Â  The Fourth Doctor and Romana end up in France at the turn of the 21st century, and she remarks that he’s taken her to France several times before.Â  “Has the TARDIS only got five locations in is randomiser or something?”Â  Heh.Â  The end up in the catacombs under the city, finding a time-lost batallion of what I think are musketeers, before finding a Minotaur (hilariously dressed in a striped shirt and a beret, in the style of Monty Python’s stereotypical Frenchman.)Â  The Minotaur bids them answer his riddle or die, and Romana (in fine overthinking style) gives an answer that is technically correct, allowing the Doctor to steal the key and escape.Â  “We never did find out WHY there was a minotaur with a beret in the catacombs…” muses the Tenth Doctor.Â  “But I’m SURE my scarf was longer than that.”

The Doctor has a sudden epiphany and sends Martha out looking for a Time Ring, and shuffles through his bag of mementos to find a small cricket ball.Â  Flashing back to his fifth incarnation, we see the Doctor,Â Tegan and TurloughÂ at the cricket grounds.Â  Turlough tries to explain what’s going on,Â but Tegan peevishly reminds himÂ that Australians also play cricket, and that they have a habit of beating the hell out of Britain in so doing.Â  “I forgot that Australian girls are different from regular ones.”Â  The game is interrupted by a Judoon platoon (though not, in this instance on the moon) who startÂ busting up the placeÂ like Robot Nixon,Â in search of something.Â  The Doctor tries to interfere, but the Judoon hold Tegan hostage in return for the Eye of Akasha, an artifact of some value to them.Â  The Doctor plays a little misdirection, sending them away with a cricket ball rather than the bomb that they wanted, andÂ theÂ TenthÂ Doctor realizes that misdirection is the lesson of these two lives.Â  HeÂ goes after Martha, as the mysterious-might-be-the-Master watches intently.Â  Some distance away, Martha finds herself facing down a giant spider.Â  “Think I’m scare of a couple of spiders?Â  I’ve lived in student housing!”Â  Heh…Â  Unfortunately, moreÂ spiders head int, and it becomes clear that she’s surrounded…Â

Next issue promises the return of the ugliest coat ever known to man, and hopefully Pia Guerra, though this month’s art was hardly inadequate.Â  For a Whovian, the references are plentiful and entertaining, and it’s nice to see the playfulness of Tom Baker’s era return.Â  The overall effect of this issue is one of painstaking love for the character and his adventures, and the art (while not capturing the character likenesses as well as Guerra) is still very well done, and gets the hard-to-draw face of David Tennant dead on.Â  It’s a really good issue of a really well done series, and probably my favorite read of the week.Â  Doctor Who: The Forgotten #3 earns 4 out ofÂ 5 stars.Â  Since it is Thanksgiving day, I’d also like to thank y’all, the faithful Spoilerites for supporting whatever it is that we do here.Â  We wouldn’t be having this kind of fun without your support, your aid and abetment, and it’s only because of the readers that we get to act the fool like this on a regular basis.Â  Domo arigato, Major Spoilerati…Â  Domo.Â  (DOMO!)